We do not need another businessman in the White House, Mr. Schultz 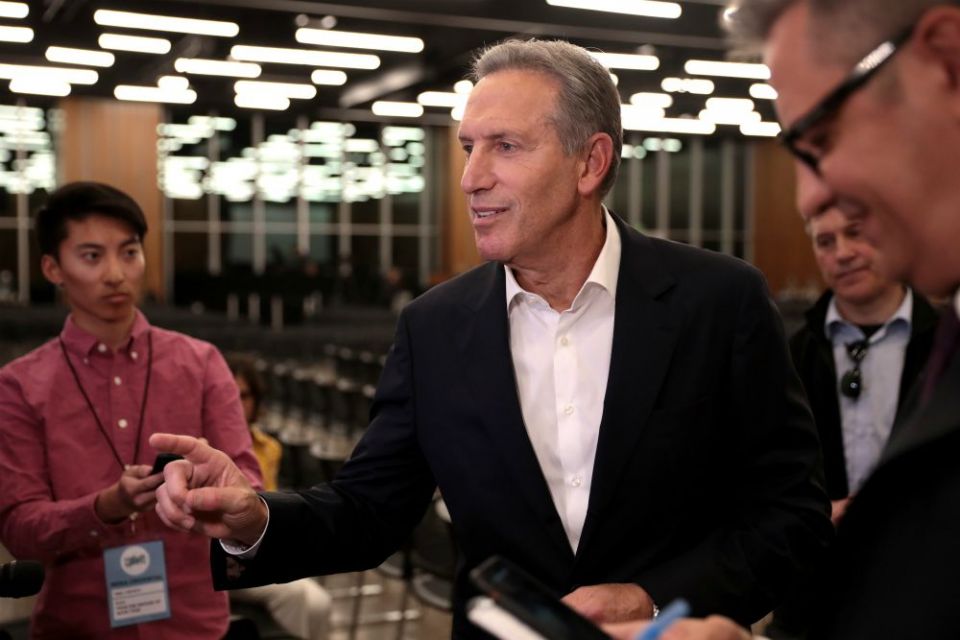 Howard Schultz, former CEO of Starbucks, speaks with the media at an event titled "From the Ground Up" (the name of his book) at the Student Pavilion at Arizona State University in Tempe, Arizona, Jan. 30. (Wikimedia Commons/Gage Skidmore)

If you go to Howard Schultz's Facebook page, you can find a video of his recent talk at Purdue University. It is mislabeled as "Howard Schultz: Live from Purdue University." I say "mislabeled" because the word "live" seems wrong. I was thinking "coma-inducing" would be more accurate. Watching this video, imposed on me by necessity, might have violated the Eighth Amendment.

Schultz tells his story, which has not changed since Horatio Alger told it in the 19th century. The idea that because he struck it rich, so can everyone, is not believable. Even if it were true, if not everyone can become a billionaire but could get ahead, if it is to have any widespread significance, it would be good to know what policies might make it possible. Nope. Schultz has his story.

And his complaints. The core of his message is not very different from Donald Trump's. He is a businessman who knows how to fix things, and his success in business is why we should hand the reins of power to him. Sound familiar?

At one point Schultz asks if anyone in the room believes the government is working well. No one raises their hand. He pauses for effect. I wish I had been there. I would have jumped out of my seat and said: "I flew here to Indiana, and the government not only screened out any terrorists from the plane, but guided the pilot in the air. At the airport, I had a burger and a little salad, and the Department of Agriculture checked both to make sure they were safe. My elderly neighbors get their Social Security checks, and Medicare covers most of their hospital costs. There are high-tech computers making sure no missiles approach our shores and soldiers battling Islamicist fascists in Syria, Iraq and Afghanistan. There are some bad things our government is doing because our nation made the mistake of electing a billionaire egomaniac, but by and large, I think our government works pretty well. And, Mr. Schultz, Democrats should not be in the business of trashing our government, even if it is the only way for you to create a lane for yourself."

Some of what Schultz says about the problems with our nation's political parties is true, although the nature of his political trajectory requires him to pretend that the blame for this situation is evenly distributed, when I think Sen. Mitch McConnell has done more to polarize Washington than any living human being, with the possible exception of the president. But surely an honest appraisal of our nation's history requires him to recognize that the two-party system has worked pretty well and that his candidacy would be an enormous threat to that system with unforeseeable outcomes that might be very detrimental. Quoting George Washington's farewell address with its warnings against faction makes as much sense as invoking his isolationism in that same speech. I wonder if Schultz has even read it. In any event, his attack on partisanship is exceedingly vapid.

Schultz said he is not, like Trump, running based on his experience as a successful CEO. Really? His whole approach to politics is a mix of bashing "both sides" and offering himself as a technocratic wizard. No ideology for him. No commitment to, or even discussion of, first principles. What ails America can be fixed if only someone smart and successful like Schultz is given the reins of power. Michael Dukakis ran this kind of campaign in 1988 and it did not work. Ironically, Dukakis actually did have a moral core, he just ran as a technocrat. I do not know if Schultz has a moral core. He discusses values the way I discuss ice cream flavors. And he is almost impossibly dull. Think of him, then, as Dukakis without the charisma.

Schultz also appeared in a town hall setting on CNN Tuesday night. This venue was even worse for him, his stiffness more in evidence, his ignorance of politics more obvious, and his media training more clumsy. To each and every question he said, "I really appreciate the question," or "Thank you for the question," which, when it is so obviously rote, lacks the sincerity he was intending to convey. And no matter how many times he says he does not want to do anything to harm the effort to take on Trump, how is it possible to discuss climate change and criticize the Green New Deal but not criticize Trump?

I checked around to see if I was merely biased against Schultz. It wasn't me. The great Ezra Klein shares my suspicions of Schultz and is even more withering in his critique. He touched on the core problem with Schultz's essential rationale for running:

Schultz is a successful CEO, and as businesspeople often do, he is looking at politics as if the president is the government's CEO. His pitch to the American people is the same as it would be if he was pitching to run a company: "What it will take is something sorely missed in Washington D.C. these days: that's where I started, and that's leadership." His view is he'll come in, get some smart people in the room, propose the kind of moderate ideas currently being drowned out by the ideologues, and solve all the problems.

But the government is not a corporation, the president is not the CEO, and the US Congress doesn't work for whoever occupies the White House. All the ideas Schultz has offered require legislation to become law. So who is going to introduce his legislation? He can't do it, because the president doesn't have the power. Who's going to vote for his legislation? Legislators from both parties would see him as a critic and a threat.

Zach Beauchamp was equally withering in his criticism of Schultz's town hall performance: "His policy answers were exercises in vacuity, less showcases for a potential president and more giant televised sucking sounds." Vacuity is the right word.

Vanity is the other right word when thinking about Schultz. Does he not see how dreadful these early forays into expected political venues and formats have been? Or has he, like most rich people, surrounded himself with fawning acolytes for so long, people who want access to his money, that he is no longer suspicious when he hears only praise? I suspect his lack of charisma and his lack of knowledge will combine to strangle any effort he makes to mount a serious campaign. It can't happen soon enough.

Column | We do not need another businessman in the White House, Mr. Schultz

Your thoughts on current political news