We stand at the brink of war, and no one is exactly sure why 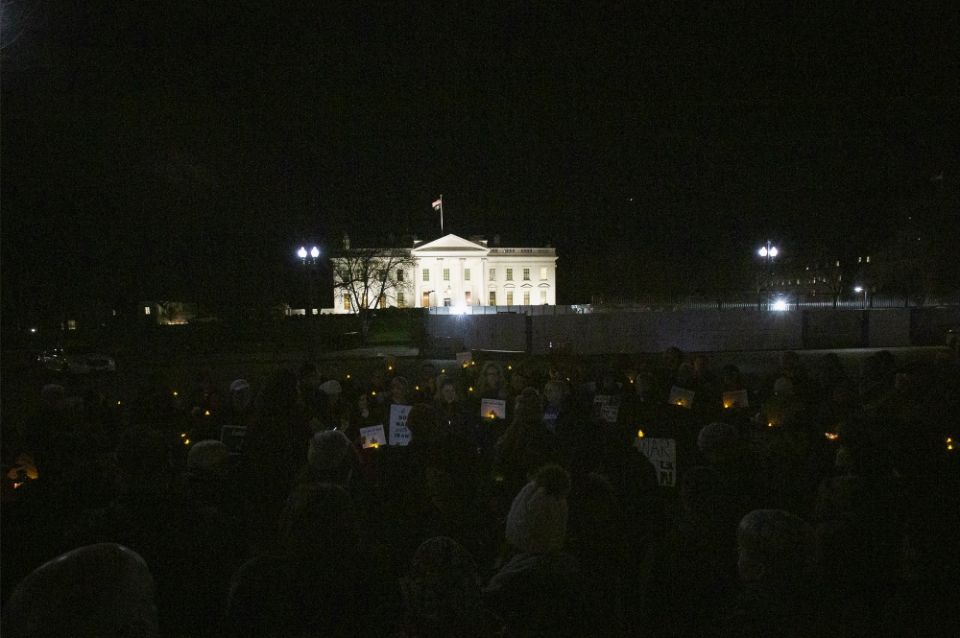 People gather near the White House Jan. 6 in Washington during a candlelight vigil to call for peaceful solutions to rising tensions between the United States and Iran. (CNS/Tyler Orsburn)

"War brings only death and destruction," said Pope Francis on Sunday after praying the Angelus with the crowds in St. Peter's Square. "I call upon all parties to fan the flame of dialogue and self-control, and to banish the shadow of enmity."

It is difficult to know what motivates President Donald Trump, but the pope will really need to call in a favor with the big guy upstairs if he thinks the current occupant of the White House will begin evidencing self-control. Never in the history of the republic have we had such a reckless president, a man for whom the threat of destabilization is no threat at all, but his usual modus operandi.

Only six months into his presidency, in an article that still ranks high for its insights into the president's psychology, Michael Kruse, at Politico, wrote, "He creates chaos, and then he responds to that chaos, withstanding it, even embracing it, feeding on it — and then he outlasts the outrage, emerging not only alive but emboldened."

For some, but not all, of Trump's supporters, this commitment to chaos fits neatly with the views of many in the Western democracies that our culture was in decline, that social progress cannot be achieved or even managed, and that the sooner our social and political institutions are uprooted or burned down, the better. Social science research, some it compiled by Chauncey Devega at Salon, in this area is downright scary.

Among the many stupidities that characterize this presidency, the aversion to dialogue with Iran because the administration of President Barack Obama successfully negotiated a nuclear deal with the government in Tehran is near the top of the list. That deal, which sought to restrict Iran's nuclear program to peaceful uses, was working, according to the International Atomic Energy Agency, and the Iranians were in compliance even after Trump withdrew the U.S. from the deal upon taking office.

Now, we stand at the brink of war, and no one is exactly sure why. News reports indicate that Trump's military advisers included the option of killing Gen. Qassem Soleimani to make other options look less draconian, and then he took the most extreme option. "Top Pentagon officials were stunned," The New York Times reported.

There are very few seasoned advisers in the president's orbit, people capable of explaining the dangerous consequences the decision courted, the second-order, and third-order ramifications. It is an understatement to say that the president is not naturally inquisitive when it comes to political history or strategy.

Trump, however, has a good political nose, which is why he is in the White House and Hillary Clinton is not. And he knows that whatever consequences his decision has on the politics of the Mideast, you can bet some Democrats will so bungle their response that his decision will end up helping Trump in the Midwest.

There is, sadly, still a "blame America first" knee-jerk reaction in some quarters of the American left. When Sen. Elizabeth Warren rightly called Soleimani a murderer, she was attacked on Twitter by Ben Norton, a leftie filmmaker and journalist. He wanted her to say: "The U.S. is the aggressor. No war on Iran! Period." The average American reads something like that and wonders which side Norton is on.

"[bogeyman] was a murderer... BUT" -> this is the formula used by useful idiots of warmongers

This is the proper take: "The US is the aggressor. No war on Iran! Period"https://t.co/pGxW9BppiR

Unfortunately, some on Warren's campaign were apparently intimidated by this and other Twitter foolishness, and Warren's comments became increasingly weak. She was unwilling to acknowledge that while war, as the pope said, "brings only death and destruction," war is not the only thing that brings death and destruction. The Iranian regime is an odd mixture of religious fundamentalists and thugs. No liberal should feel the need to defend them as part of their criticism of Trump's action.

The need for the Democrats to be balanced is dictated not only by a strategic and a moral assessment of the situation. Trump's bellicosity does not sit well with much of his base. Tucker Carlson, a longtime critic of neocon foreign policy, began his Fox News show Monday night with a withering indictment of those in "the deep state" who have long wanted a war against Iran and reminding Trump that his opposition to endless wars in the Mideast was part of what got him where he is.

Carlson can remind the president as much as he wants, but the decision of whether or not there will be a war is largely in the hands of the mullahs in Iran. In his earlier career, Trump could bluster his way to a successful agreement with banks who needed him as much as he needed them. The mullahs do not need him.

America's hands are not clean regarding Iran's history, but there should be no false equivalencies. America is a nation that continually fails in its attempts at justice, but the regime in Tehran makes no such attempt. "Justice removed, what are kingdoms but great bands of robbers?" asked St. Augustine. "What are bands of robbers but little kingdoms?" It is frightening that we have a president who does not think through the consequences of his actions, but it was the military-industrial complex and the bureaucracy of government that gave Trump this particular means of conducting warfare.

There are no good answers when it comes to U.S. policy in the Mideast. But no Democrat will get to find the least bad answer unless they first make it unmistakably clear to the American people which side they are on. There is no need to excuse Trump's recklessness, but there is also no need to ignore the evil that emanates from Tehran. They need to acknowledge the wisdom of the great Yitzhak Rabin: "You don't make peace with your friends. You make it with very unsavory enemies."

Column | We stand at the brink of war, and no one is exactly sure why

340 US rabbis: 'We support this historic nuclear accord'