Will Trump be the first president reelected during a full-blown recession? 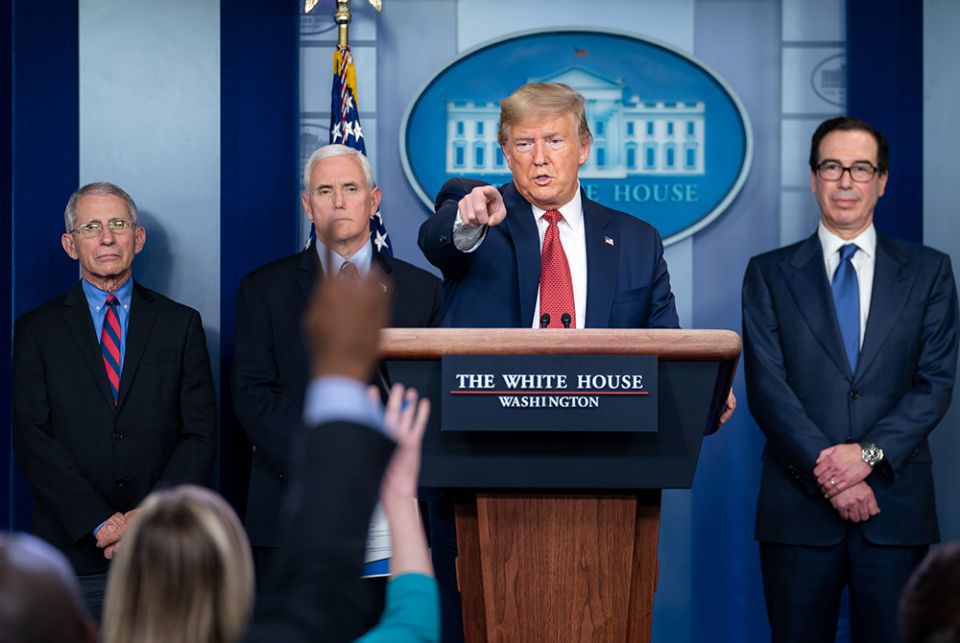 President Donald Trump points to a reporter with a question during the coronavirus update briefing March 25 in the White House. (Official White House Photo by Tia Dufour)

On Friday morning, President Donald Trump's approval rating inched up to 46% for the first time since the late winter of 2017 according to FiveThirtyEight.com. Many people ask: how is this possible? Trump's failure to respond to the coronavirus threat in a timely way has made a bad situation much, much worse. Don't people see that?

The president's approval rating had been hovering around 41-42% most of last year. It ticked up to 43% as the House voted to impeach him in December, causing Republicans who do not like Trump to realize that they liked House Democrats even less. His approval dropped back down to 42% early this year and it has fluctuated around that number until the past week or so when there has been a steady increase.

At the same time, Trump's disapproval rating mostly fluctuated between 52-54% last year. It dropped in the past week below 50% for the first time since March 2017.

So, before we ask why Trump's approval rating is going up, we need to ask who are the 10% of Americans who do not feel that strongly one way or another about Trump that their attitudes are either unregistered or now in flux? How is it possible that this enormously divisive person has not driven everyone into one camp or the other, such that 10% are still up for grabs? It is an important question because, of course, that 10% has it within their power to decide whether or not Trump wins reelection.

A significant part of that 10% are low information voters and/or people who are not particularly tuned in to national politics. These are not the same groups, although there can be significant overlap. In a time of national crisis, when the rhythms of daily life are upended, those who do not usually pay attention to politics do feel the need to pay attention in ways they normally would not. And, every night, they see Trump at the rostrum telling them what they want to hear: This is awful; it is the fault of the Chinese; the pointy heads do not want me to reopen the economy but I really want to help get you all back to work.

On the other hand, they hear the presumptive Democratic nominee, former Vice President Joe Biden, telling them — oh, wait a minute. Where is Biden? Is this what leadership looks like?

Most of my friends are people who are deeply involved in the life of the church or in the political life of the nation. But, some of my friends pay very little attention to politics. This winter, I was speaking with a young friend who is very bright, college educated, a lovely person. He was repeating Republican talking points regarding the impeachment trial and, when I pressed him a bit, he said that he worked with a guy who had told him that every president did the kind of things Trump was charged with, that the impeachment process was simply the Democrats trying to bring him down, overturning the results of the last election, and why was Hunter Biden making so much money working for a company in Ukraine anyway? He then added about his co-worker who is such a Trump fan: "And this guy is the nicest guy in the world, the first guy there if you need help." 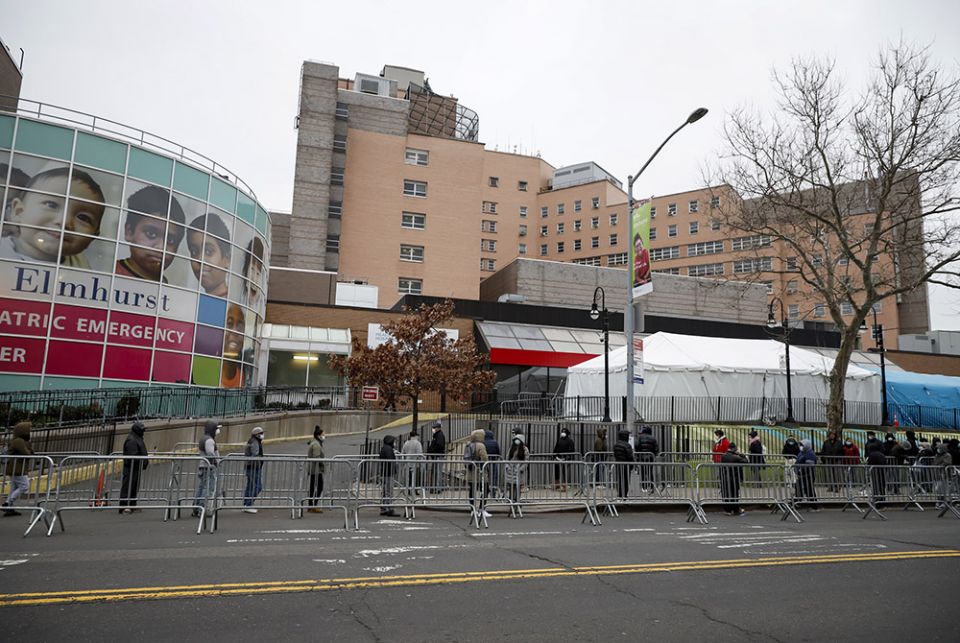 People wearing protective gear wait in line to be tested for the coronavirus outside Elmhurst Hospital Center in the Queens borough of New York City March 25. (CNS/Reuters/Stefan Jeremiah)

It is not that difficult to believe that 10% of the American electorate love this country but find politics distasteful and are likely to accept the arguments put forward by someone they know who does pay attention and whom they know to be a good person and who is, also, the loudest person in their workplace or church group or parents' association. Nor is it hard to believe that this same 10% could tune in, hear the president, self-assured as always, and feel that he sounds like he has a handle on the situation. And, for Catholics among this ten percent of voters who do not pay a lot of attention to politics, a nod from a pastor or a bishop indicating support for Trump might be enough to quash any doubts they might otherwise entertain. "Father John said Trump was pro-life so I guess I should support him," you can imagine some Catholics saying and there is plenty of polling data to support that supposition.

As I argued last week, if the Democrats do not find ways to make sure these voters recognize that the economic mess in which we all find ourselves is only partly the result of the virus, they will lose in November. The economic mess, which is touching far more people than the virus itself, is largely the result of Trump's failed response to the virus. 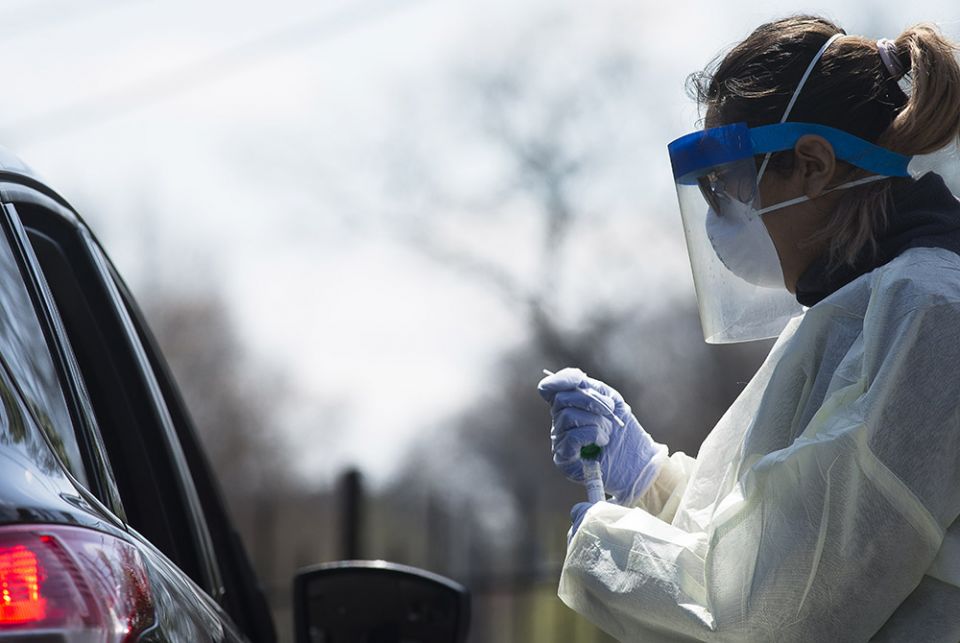 I saw an ad on CNN, a typical political ad with a disembodied voiceover, dark music, clearly an attack ad, and it had a mistake in the middle of it permitting the Trump campaign to attack it as false. The mistake was minor, but real. The more important problem was that the ad lacked the power of "Trump's Coronavirus Calendar" to which I called attention earlier. The calendar video was entirely in the president's own words. The viewer can be 20 or 25 seconds into it before realizing it is an attack ad. It would be far more effective than the standard negative ad now being shown. Unless the Democrats reach that 10% who do not have a strong feeling about Trump and make sure they grasp how his failed response has made this crisis much, much worse, they will lose in November. Punto. Harkening back to how President Barack Obama handled the Ebola crisis, or how other countries are handling the coronavirus crisis, neither of these approaches will work with people who do not pay a lot of attention to politics.

It is possible that Trump might yet ruin his administration's response so badly that all but his base will abandon him. His proposal to start reopening counties with low infection rates could very easily backfire and his willingness to promote a proposal with such obvious loopholes indicates his desperation. But, none of us can hope that he gets this wrong. The consequences are too grim to contemplate. Indeed the most horrible prospect imaginable is that a premature resumption of normal life leads to a resumption of the pandemic as well. That might not only leave thousands more dead but also wreck the economy beyond repair, inviting the kind of societal chaos that ends in some kind of authoritarian regime.

Trump's mistakes already should be sufficient to reach those voters who do not pay much attention to politics but who will likely decide whether or not Trump will be reelected. Unlike the Ukraine impeachment proceedings, there is nothing abstract about the coronavirus. If the Democrats can't make the president's mistakes stick to him, maybe it is time for them to find a different country.

Column | Will Trump be the first president reelected during a full-blown recession?

Trump thinks his road to victory passes through the Catholic Church