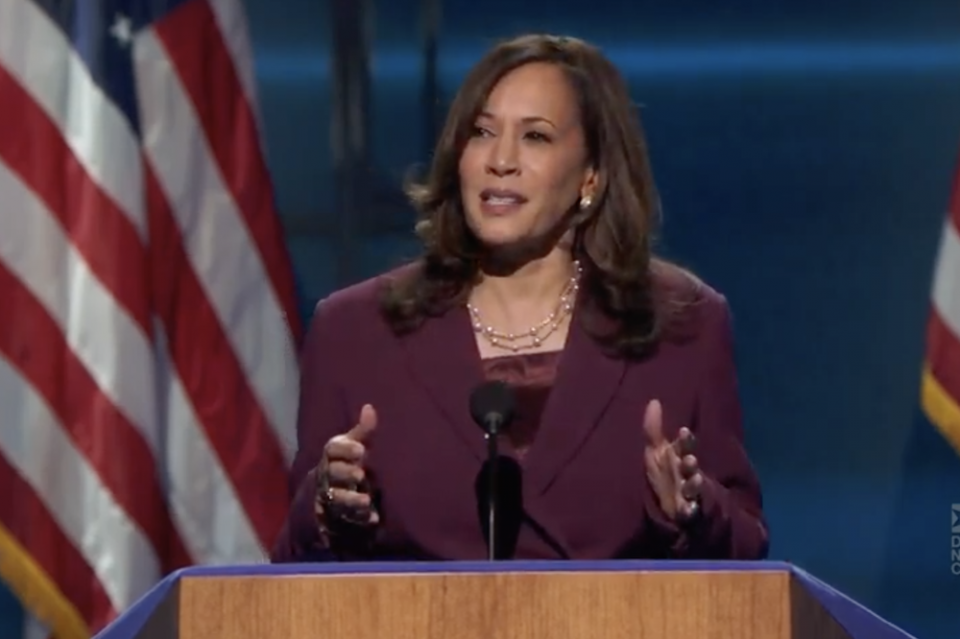 Stop for a minute and think of that line-up: Three high-powered women journalists were discussing the principal speakers at the national convention of a major party, and five of the key six speakers were women. Most importantly, the three women journalists did not even remark upon the fact that five of the six key speakers were women. It seemed entirely natural. It was, in the best, most remarkable sense of the word, unremarkable.

As the evening began, gun violence was the first issue in focus, and in addition to the harrowing testimony of mothers who had lost children to gun violence, Giffords, recovering from a 2011 shooting that killed six, was the principal speaker. As the program turned to climate change, New Mexico Gov. Michelle Lujan Grisham was the principal speaker.

Then the speeches turned to a more specific focus on women and women's issues. A video featured a variety of voices and, among the many concerns raised, funding for Planned Parenthood received a mention for about 10 seconds. Ten seconds. Later, there was a clip from the 2016 convention speech by the president of NARAL Pro-Choice America's president, Ilyse Hogue, but the clip featured a line that even I could agree with: "If we want families to succeed, we start by empowering women." I agree with that. Who doesn't?

The video ended with Hillary Rodham Clinton speaking from her home in Chappaqua, New York. For the first time ever, I thought she completely, undeniably outshone her husband Bill, whose speech the night before was meh. HRC's best line, one she was uniquely placed to pose, was clearly designed to get under President Donald Trump's skin: "Vote to make sure we — not a foreign adversary — choose our president." And if that did not catch his attention, this "get-out-the-vote" line surely did: "We need numbers so overwhelming Trump can't sneak or steal his way to victory." Sneak. Steal. She has his number.

Next up was Speaker of the House Nancy Pelosi. The biographical video introducing her was the single best thing in the entire convention so far. The images of a young Pelosi, at her wedding, then surrounded by her children, then getting into politics: I had never seen those images woven into such a powerful, accessible storyline. The short video captured what the theme of the night was trying to communicate: In a relatively short time, women have become political players in a big way, and not only are some of them like Pelosi really good at it, but the country is better, much, much better for it.

Pelosi was followed by Sen. Elizabeth Warren and, after two nights of moderation, the firebrand from Massachusetts threw down some good red meat for us progressives. I admit it: I still wish she had become the nominee. Warren explained how and why child care in her own life had been such a central concern:

One night my Aunt Bee called to check in. I thought I was fine, but then I just broke down and started to cry. I had tried holding it all together, but without reliable childcare, working was nearly impossible. And when I told Aunt Bee I was going to quit my job, I thought my heart would break.

Then she said the words that changed my life: "I can't get there tomorrow, but I'll come on Thursday." She arrived with seven suitcases and a Pekingese named Buddy and stayed for 16 years. I get to be here tonight because of my Aunt Bee.

I learned a fundamental truth: nobody makes it on their own.

And yet, two generations of working parents later, if you have a baby and don't have an Aunt Bee, you're on your own. 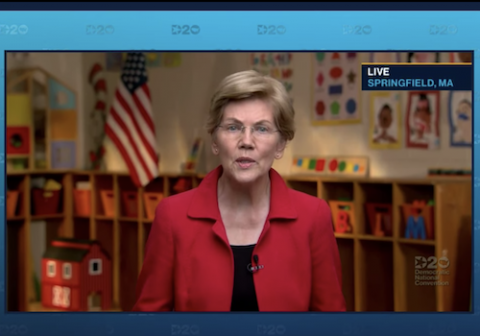 She went on to explain that child care is as much a part of necessary national infrastructure as a bridge or a road, and her explanation was stellar and stunning. "We build infrastructure like roads, bridges and communications systems so that people can work. That infrastructure helps us all because it keeps our economy going. It's time to recognize that childcare is part of the basic infrastructure of this nation — it's infrastructure for families."

A good friend sent the note that his daughter thought Warren's speech should "be on a loop 24/7." I agree.

I was surprised, and pleased, that former President Barack Obama chose to deliver his remarks from the same venue in Philadelphia where he threw the Rev. Jeremiah Wright under the bus in 2008. Obama's speech was deeply and comprehensively patriotic as was appropriate for a former occupant of the White House.

"I'm in Philadelphia, where our Constitution was drafted and signed. It wasn't a perfect document. It allowed for the inhumanity of slavery and failed to guarantee women — and even men who didn't own property — the right to participate in the political process," Obama said. "But embedded in this document was a North Star that would guide future generations; a system of representative government — a democracy — through which we could better realize our highest ideals. Through civil war and bitter struggles, we improved this Constitution to include the voices of those who'd once been left out. And gradually, we made this country more just, more equal, and more free." His incrementalist vision will not satisfy some. It is obviously at odds with the vision of critical race theory, which sees America's sins as indelible, not susceptible of amelioration. I found it refreshing.

The vice presidential nominee, Sen. Kamala Harris, had the unenviable job of following Obama. Her speech was fine, and especially in the beginning, I found myself thinking I would not refuse an invitation to a party at her house: Harris seems fun, smart, engaging. But she lacked Obama's soaring vision and Warren's ability to link public policy to personal story. When Harris did relate her personal story, it lacked the inspiring, universalist vision Obama articulated.

Still, I have to admit that while Harris' record makes me deeply suspicious of her policy priorities, she is someone whom it is very difficult to dislike. Her speech reflected a conscious decision to drive up turnout among Black women, and I hope most Americans will identify with that story of inclusion and empowerment. Trump is betting they won't and that he can capitalize on the residual racism of the culture.

Even though Harris' speech had more of the identity politics focus that is a political dead-end, in one regard it reaffirmed the central theme of the night: In the Democratic Party at least, women do not come on to speak only about women's issues. They demonstrated their expertise on gun rights and immigration, on health care and foreign policy. It was so refreshing to see two hours of a political convention in which only one man, and he a former president, has much of a role.

In the end, the first three nights are all prologue. Tonight, Joe Biden needs to seal the deal, and make the case for his own election, telling the American people where he wants to lead the nation. This weirdest of national conventions may or may not suit his speechifying abilities, but he has been introduced as the man for the moment. It falls to him to make his own case.

First night at the Democratic convention in Philly