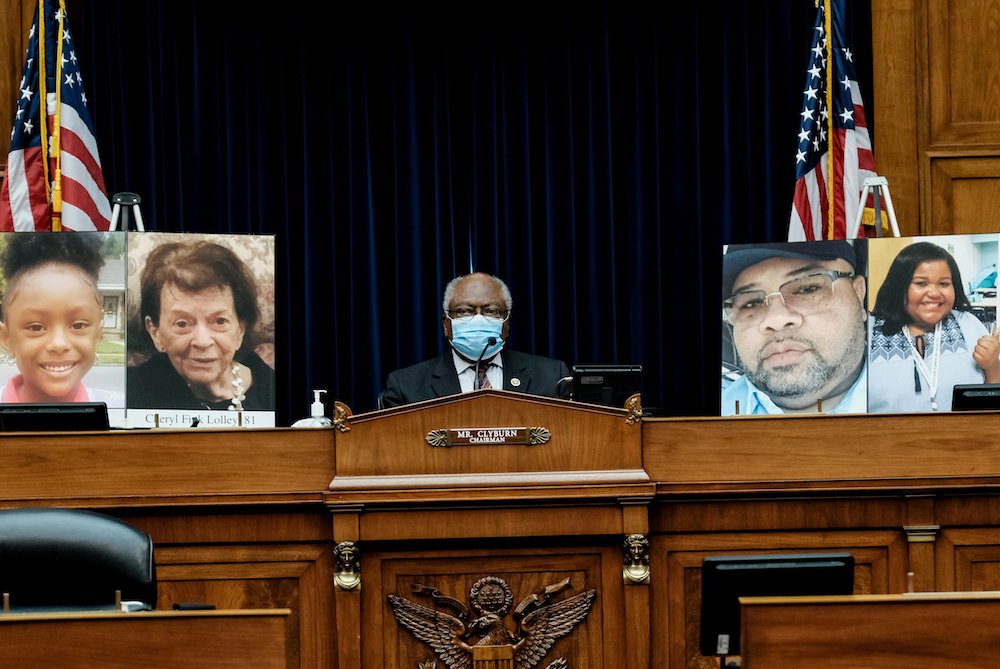 Rep. James Clyburn, D-South Carolina, subcommittee chairman, listens as U.S. Secretary of Health and Human Services Alex Azar testifies on Capitol Hill in Washington Oct. 2, to the House Select Subcommittee on the Coronavirus Crisis. Photos of people who died after contracting COVID-19, the disease caused by the coronavirus, are displayed on either side of the congressman. (CNS/Reuters/Michael A. McCoy)

Much of the coverage of Pope Francis' expansive encyclical Fratelli Tutti, released Oct. 4, focused on its feel-good themes of unity, dialogue and peace. Who can argue against the notion that we are "brothers and sisters all?"

But this document, the pope's third encyclical and clearly a summary of his papacy so far, is no rote call for prayers and best wishes in the face of the pandemic. It is, foundationally, a pointed critique of nationalistic populism, of economic systems that exploit the poor, and indeed, of democracy itself, at least as it seems to be evolving at the beginning of the 21st century.

We agree, and appreciate the pontiff's bold condemnations of neofascist ideas about nation and race, trickle-down economics, unbridled free-market capitalism, income and wealth inequality, and a libertarianism that merely dresses up selfishness for more palatable consumption.

These — along with an excessive individualism and "feverish consumerism" — prevent a "better kind of politics, one truly at the service of the common good," the pope says.

There can be no mistaking the pope's words: The neoliberal establishment is not compatible with the Gospel of Jesus Christ.

"The marketplace, by itself, cannot resolve every problem, however much we are asked to believe this dogma of neoliberal faith," Pope Francis writes. "Whatever the challenge, this impoverished and repetitive school of thought always offers the same recipes."

"Neoliberalism simply reproduces itself by resorting to the magic theories of 'spillover' or 'trickle,' " he continues. "There is little appreciation of the fact that the alleged 'spillover' does not resolve the inequality that gives rise to new forms of violence threatening the fabric of society."

Instead, the pope urges, we must follow the model of the good Samaritan, not only as individuals but as societies, paying attention to the suffering around us rather than looking away.

This requires a change of heart. "Otherwise, political propaganda, the media and the shapers of public opinion will continue to promote an individualistic and uncritical culture subservient to unregulated economic interests and societal institutions at the service of those who already enjoy too much power," Francis writes.

The document is not perfect. Its gender-exclusive title and lack of female voices, even in the citations, is a serious problem. But his words about the economics and politics of today are strong, countercultural words. And the pope's timing couldn't be better, as the United States moves into the last weeks before what is being called the most consequential election since the Civil War.

While he doesn't mention President Donald Trump directly, Francis' reference to populist leaders who "are able to exploit politically a people's culture, under whatever ideological banner, for their own personal advantage or continuing grip on power" can't help but bring to mind the current president.

Fratelli Tutti warns against demagoguery "for its own purposes," with no concern for the vulnerable — an especially apt description of Trump, given his apparent disregard for the health of others as the coronavirus continues to spread through the White House.

While no pope should tell Americans how to vote — and Francis is clearly not doing so here — it's also true that this encyclical gives U.S. Catholics much to think about as they consider their choice in the presidential election.

In contrast to too many U.S. bishops who insist that the criminalization of abortion or so-called "religious liberty" issues are the only ones Catholics should consider, Francis puts economic issues (not to mention the death penalty and war and peace) front and center. 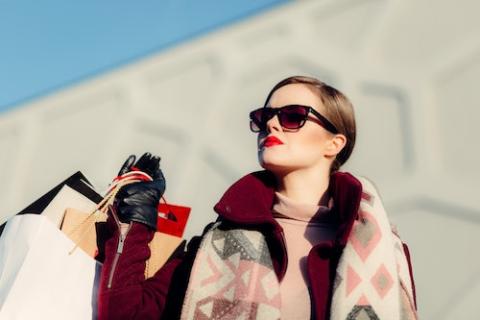 And it is the economic common good — not one's individual economic concerns — that must be considered, according to the pope.

After reading this encyclical, no Catholic should feel any qualms about voting for Joe Biden. Heck, they could vote for Bernie Sanders, had he been nominated, given the pontiff's strong condemnation of the unfair distribution of wealth.

We can already hear the retort: "But … socialism!" The "S" word has become a dirty word in the United States, in part due to a misinformation campaign by Republican candidates. At a recent webinar hosted by Boston College, Trinity College and St. Anselm College, former New Hampshire Gov. John H. Sununu called Francis an "Argentine socialist."

It's important to be clear what democratic socialism is not: It is not synonymous with Marxism, nor is it the socialism of authoritarian regimes like China or the former Soviet Union, which were not democracies.

Democratic socialist policies call for the government to provide basic services, such as health care and education, for all its citizens — not necessarily that the government need own or control all aspects of such services.

Although antithetical to the rugged individualism upon which the mythology of the United States was built, democratic socialism's concern for the common good is not antithetical to our Christian and Catholic faith. It was part of the way Jesus' disciples and the early church lived, as described in the Act of the Apostles; it was and is part of how religious communities of men and women have operated; and it is the motivation of some current religious communities, such as — in an ironic twist — the "covenanted community" of the Republican-nominated prospective Supreme Court justice nominee Amy Coney Barrett.

The Christian tradition "has never recognized the right to private property as absolute or inviolable." That's Pope John Paul II, in his 1991 encyclical Centesimus Annus, which Francis quotes in Fratelli Tutti.

Francis also notes that the right to private property is a "secondary natural right," derived from the "universal destination of created goods," a principle in Catholic social teaching that says the goods of creation belong to the whole human race.

While this may sound extreme to individualistic American ears, it is the countercultural Gospel message that we must all listen to, especially when so many lives — of the poor, the unemployed, the sick — are literally on the line.

This story appears in the Fratelli Tutti feature series. View the full series.
A version of this story appeared in the Oct 16-29, 2020 print issue under the headline: Listen to Francis on common good.