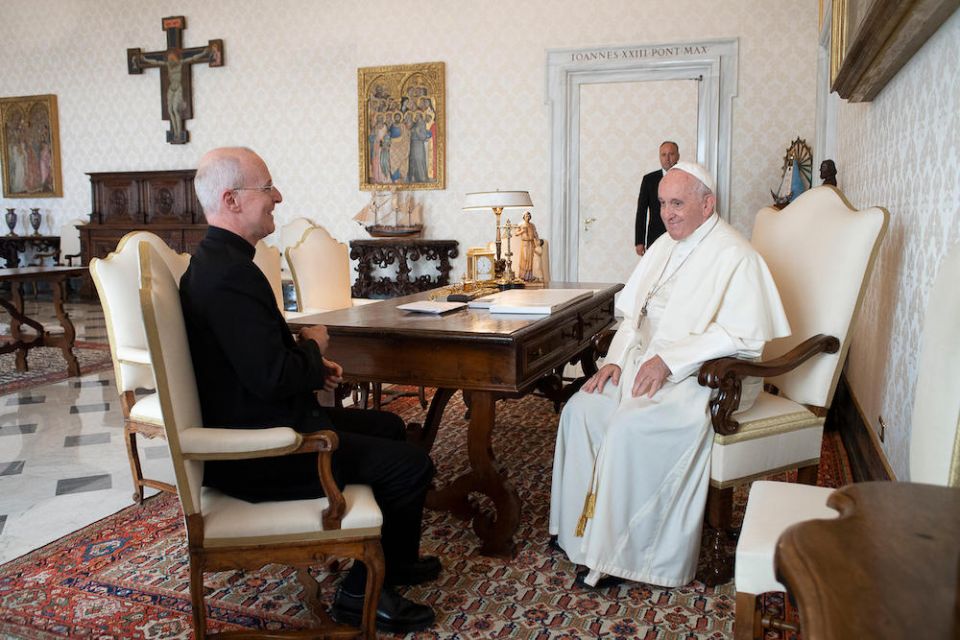 Pope Francis, right, during a private meeting with Jesuit Fr. James Martin, author and editor at large of America magazine, at the Vatican Sept. 30, 2019 (CNS/Vatican media)

A sequence of events unfolded in recent days — a "What did the pope really say?" intrigue — that might have the quality of a Molière comedy, except that, in the end, the hidden whisper campaign misrepresented the pope and was aimed at destroying a good priest's reputation. Worse, it further fueled the most extreme fringe of the Catholic right and its insane fixation on homosexuality.

The plot had its beginnings in the recent ad limina visit to the Vatican of bishops from Region XIII, an area covering Arizona, Colorado, New Mexico, Utah and Wyoming. The visit included a conversation with Pope Francis.

On their return, Catholic News Agency announced to the world that "several" bishops, who remain anonymous, told them that the pope was quite upset, even angry, with Jesuit Fr. James Martin, who has a noted ministry to the Catholic LGBT community. The object of the pope's concern, said the anonymous several bishops, was the way Martin was characterizing his celebrated meeting with the pope last September. They also said that his Jesuit superiors had called him to task about his ministry and that the pope had actually given him a "talking to."

Some clarity is necessary here. Do not mistake Catholic News Agency (CNA) for Catholic News Service (CNS). The former, which posted the anonymously source drubbing of Martin, is affiliated with EWTN, which we've previously profiled in our series on the far-right Catholic money and entities attempting to fashion a narrow Catholic narrative for the wider culture. It is a narrative that can't imagine a church that would embrace and celebrate its LGBT members with the same warmth and enthusiasm as it welcomes others.

CNS, on the other hand, is the official news service of the United States Conference of Catholic Bishops. While it might not engage in reporting that would rock the institutional barque, it is honest and professional in what it does and would never trade in this sort of transparently shoddy attempt to smear.

The tale took a remarkable turn, however, when Archbishop John Wester of Santa Fe, New Mexico, decided to go public to refute the CNA account.

"Our meeting with the Pope lasted almost two hours and forty-five minutes, so it is difficult for anyone to remember with precision anything that was said," he wrote. "However, the general tone of the Pope's responses to issues raised with him was never angry, nor do I remember the Pope saying or implying that he was unhappy with Father Martin or his ministry."

He also said that while Martin and his ministry were discussed, it was not the pope who raised it but rather some bishops.

Martin himself, thanking Wester on social media, said he's never had a "talking to" and "never heard anything negative from Jesuit superiors."

It is important to understand some of the back story contained in the reporting of NCR national correspondent Heidi Schlumpf about the incident. The author of the "report" was J.D. Flynn, CNA's editor in chief who previously worked in the Diocese of Lincoln, Nebraska, and the Denver Archdiocese, at the latter under Archbishop Charles Chaput, a noted Francis critic. Days before the CNA article appeared, Flynn had authored a piece critical of Martin in the conservative publication First Things.

It is enough to say here that websites labeling themselves Catholic have engaged in absolutely unhinged homophobia and made Martin a primary target. That bishops — dare we point out that they are fellow priests — should provide even the slightest legitimacy to such dangerous thinking is horrifying.

In the current atmosphere, and given the traditional standards of secrecy and silence among the episcopal culture, the church owes a deep debt of gratitude to Wester and Biegler for their courage in supporting a good priest and setting the record straight on their conversation with Francis.

A version of this story appeared in the March 6-19, 2020 print issue under the headline: The pope is not upset with Fr. James Martin .

Editorial | Editorial: The pope is NOT upset with Fr. James Martin