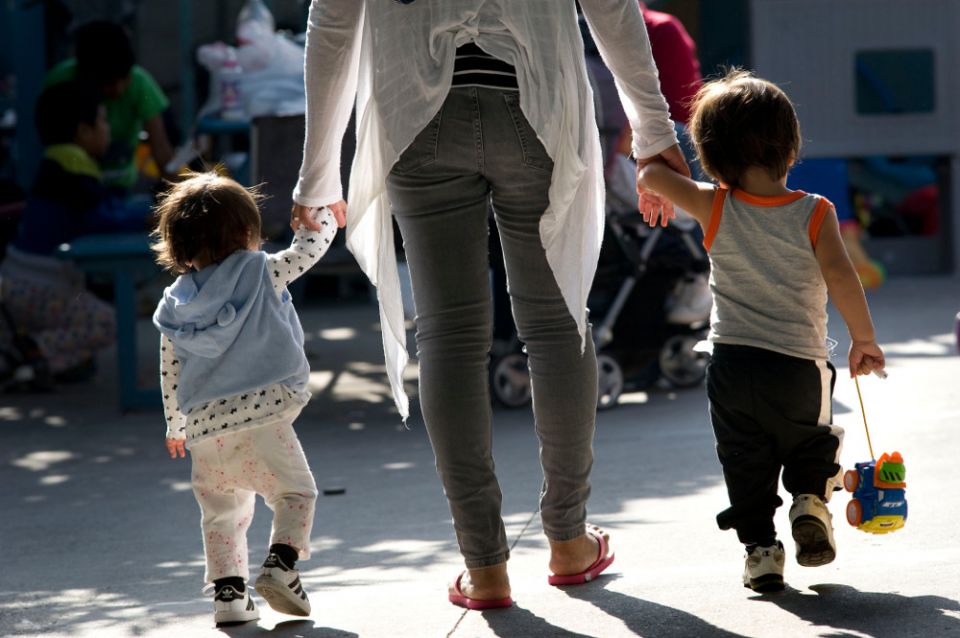 A woman walks with children at a shelter for migrant women and children in Tijuana, Mexico, June 20. The shelter is run by the sisters of the Missionaries of St. Charles Borromeo. (CNS/EPA/David Maung)

It took one week for the U.S. Conference of Catholic Bishops to follow the call of Cardinal Joseph Tobin of Newark, New Jersey, and send a delegation of bishop-shepherds to the heart of the immigration story to get a firsthand view of the situation.

The group of four bishops, including U.S. bishops' conference president Cardinal Daniel DiNardo of Houston-Galveston, visited a respite center in McAllen, Texas, July 1-2, according to Rhina Guidos, a Catholic News Service reporter who was also there. She tells us they met with fathers, mothers and children — many of whom spent weeks migrating by foot from their homes in Mexico and Central America — feeding them, handing out clothes and praying with them.

"We can be a nation of laws without being a nation without compassion," Bishop Daniel Flores of Brownsville, Texas, said during his homily at a Mass for the immigrants.

Tobin raised the idea of sending a delegation to the border during the bishops' annual spring assembly June 29 in Fort Lauderdale, Florida. He promoted it as a way to understand the hardship and anguish of those people desperate enough to leave their countries to try to start new lives in this currently unwelcoming land. At the same time, he said, it was a way the bishops could protest the "zero tolerance" policies of the Trump administration when it came to enforcing the nation's immigration laws.

"The latest developments are consistent with the sort of cardiosclerosis that has begun in our country, and it concerns across-the-board life issues," Tobin told his fellow bishops. Sending a delegation to the border would be "a sign of our pastoral concern and protest against this hardening of the American heart."

We recognize that President Donald Trump did the right thing last month when he revoked his administration's policy on separating families who cross U.S. borders, but we cannot let one victory detract from the larger issues at stake. For one thing, the executive order contains no details about what happens to the 2,300 children, some infants, already in detention. We cannot allow that situation to remain unresolved. Those children must be reunited with their families.

Migrant communities are living in fear, especially after recent raids of businesses such as two gardening centers in Ohio, where more than 110 people were arrested and removed from the life they were building. The agency known as ICE — Immigration and Customs Enforcement — as well as the patrol agents operating under U.S. Customs and Border Protection have, fairly or not, started to take on a persona that has been compared to the gestapo of the Hitler era. Immigration-rights groups and now some Democrats are calling for its abolition.

Too few of us take the time to try to understand why people would uproot their families and disrupt their lives to move to a foreign land. Some of the driving forces certainly are economic, but often families are trying to escape widespread and horrific violence instigated and fomented by corrupt governments and gangs. One woman from Guatemala told Guidos in the Texas center that as she was making her way to the United States, she had heard authorities were separating children from their families. But, she said, she had faced the very same risk in her home country.

Until the underlying causes are examined and acknowledged, the U.S. immigration system won't be changed to something that better fits the definition of humane.

Regrettably, the "cardiosclerosis" of our present political climate is not attuned to analysis and problem solving. That does not mean that we should not weigh in on the issue and make our priorities clear. On June 30, protesters marched in droves in cities across the country from Washington, D.C., to Redding, California, to show their continued opposition to Trump's policies that amount to treating migrants as animals.

For four bishops, that protest came in the form of a personal and, we hope, enlightening two days along the Mexican-Texas border.

Flores was right. We don't have to let compassion be tossed aside by our legal systems. It's been proven we are a nation of laws. Now, let's work on the compassion part.

This story appeared in the July 13-26, 2018 print issue under the headline: Return compassion to migration debate .