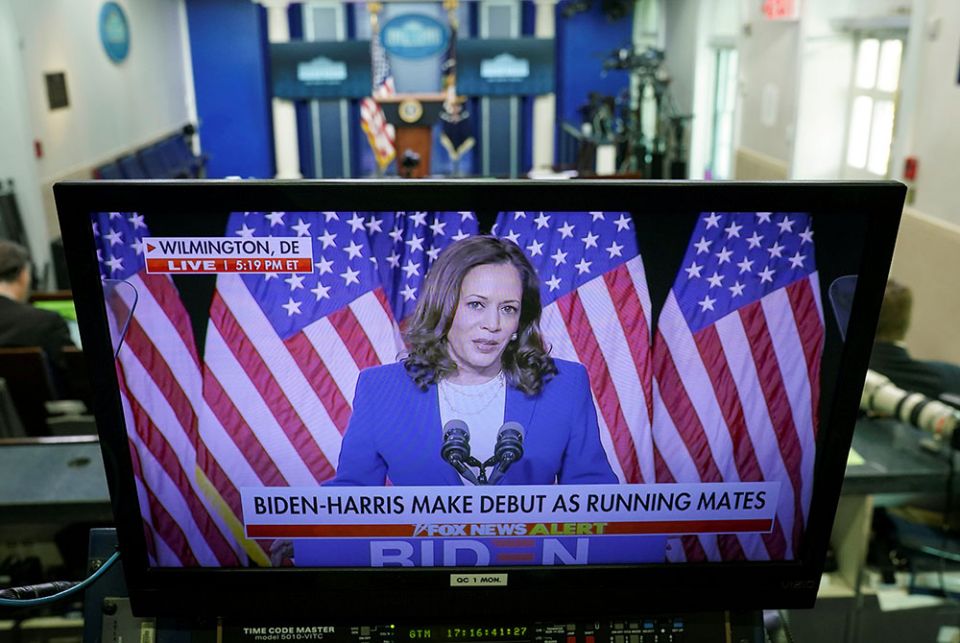 After former Vice President Joe Biden made the historic announcement that Sen. Kamala Harris would be nominated as the first woman of color on a major party presidential ticket, the attacks began. Sadly, that is all too common place because Republicans openly use sexist and racist rhetoric against people they disagree with.

But one attack being peddled by conservative Catholics surprised me: they claim that Kamala Harris is "anti-Catholic." Well, I can tell you firsthand that the senator is not. Network, the Catholic social justice organization where I am the executive director, has worked extensively with the senator and her office to promote the common good. She listens carefully to the concerns of Catholics and values their voices. Kamala Harris is a great vice presidential nominee for all Catholics who support the priorities of Pope Francis: reducing poverty, protecting the elderly, caring for immigrants, ending racism and more.

Some doubts expressed about Senator Harris also come from folks I respect, but I think they would have different opinions if they had worked with her as we have. I have read a variety of opinion pieces parsing who Harris is and is not … mostly is not. They claim she is not a movement person. She is too centrist. She is too extreme. She attacked Joe Biden in the debates. As district attorney in San Francisco and attorney general in California she was tough on crime.

However, all this does not tell the full story. Sen. Kamala Harris is the right person to be Joe Biden's vice presidential nominee because she is ready to govern, and as a progressive woman of color, she meets this moment perfectly. Let me tell you what I know about Harris from working with her during the past three years that she has been in the Senate.

First, Harris has a 100% rating from Network for her votes on critical economic justice issues. For us, this means that she votes to mend the gaps in income and wealth disparity in our nation. As the country faces the fallout of the pandemic and the economic collapse, addressing the issues of income and wealth disparity are more important than ever. Harris has provided key leadership during this pandemic by pushing to get money directly into the hands of struggling families. What a contrast to the Republican efforts!

Second, Harris works hard to make government work. She is diligent in preparation for hearings. Harris is always prepared to ask the probing questions. Her legal training and experience as a prosecutor equip her to penetrate issues and find solutions that can work for the common good. This was dramatically seen in her first hearing on the Homeland Security Committee where she pursued the department secretary on the inhuman and illegal treatment of children at the border. As vice president, this leadership quality would be essential in helping to make change happen.

Third, she seeks out opportunities for collaboration where she can learn and move solutions forward. This is seen in her work with Sen. Cory Booker on criminal justice reform. It is clear that she has learned from the collaboration and developed her thinking (and acting) on this critical issue. She has moved from just being the prosecutor, to being a senator who always considers all of her constituents' needs. Structural racism has shaped every element of our society, none more so than the criminal justice system. Harris' learning in this area gives her the capacity to lead in reforms that are so vitally needed. We so desperately need an administration that can listen to new voices and learn from others.

Fourth, Harris works methodically to pass legislation and make lasting change. When Network staff met with her office to recommend new ways that her rent relief bill could reach more families in need, she listened and made the bill better. It is true that Sen. Mitch McConnell's refusal to have the Senate be engaged on substantive legislation has stymied her ability to get bills passed, but she has the proposals vetted and ready to address the needs of our nation of many specific issues. As a member of the Biden administration, Harris would use these proven proposals to create policy that prioritizes the common good.

These characteristics are exactly what the nation needs now in a new administration. Just look at the current reality. We are in the chaos of a Trump administration that believes that the way to handle this economic crisis is to give yet more tax breaks to the wealthy through a capital gains tax cut. As a senator, Kamala Harris has prioritized the needs of the unemployed and homeless.

The Trump administration preferences chaos and off-the-cuff policy. Harris has a diligent work ethic and engages in the challenging art of governing. Donald Trump divides and stigmatizes. Harris seeks to collaborate in order to accomplish positive change for the common good. Finally, I should point out, that when President Trump was asked what he wanted to accomplish in his second term he had no goals. Harris and former Vice President Biden have clear goals and directions.

Together, Harris and Biden would protect people in poverty, provide for the elderly and welcome migrants. They would reject racism and work to root out the inequities in housing, health care, education, the economy and our criminal justice system. Harris knows that Black lives matter, and she has felt the impact of racism and sexism. As vice president, she would never ignore these critical issues. These are the values that Pope Francis says Catholics and all people of good will must include in their decision on Election day. Harris shares these values.

Therefore, based on my experience and the experience of Network, I believe Sen. Kamala Harris is a great choice to be Joe Biden's vice presidential running mate. I urge you to look at the facts, not the partisan rhetoric. We need stable, thoughtful leadership, especially now in this time of crisis. That is exactly what these two thoughtful people bring to the task.

[Social Service Sister Simone Campbell is the Executive Director of Network Lobby for Catholic Social Justice and leader of Nuns on the Bus. She has led six cross-country Nuns on the Bus tours focused on tax justice, health care, immigration reform, voter turnout, and mending the gaps in income and wealth inequality.]