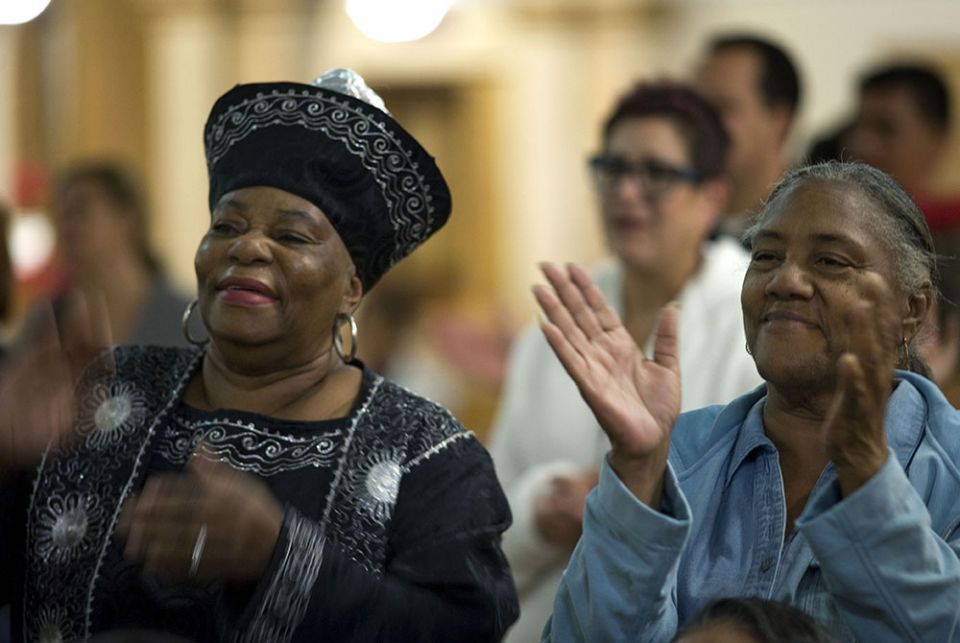 The month of February is recognized in the United States and Canada as Black History Month. While the civil commemoration in America officially began in 1970, its origins date back to at least 1926 when historian Carter G. Woodson called for the observance of "Negro History Week" during the second week of February to coincide with the birthdays of Frederick Douglass and Abraham Lincoln.

That the country needs to explicitly set aside a time of recognition for black history unveils the uncomfortable truth that white people avoid facing and that people of color reckon with daily: structural racism is real, white supremacy is normative and the stories we tell about ourselves as a nation — and as a church — are skewed in such a way as to subjugate and erase black oppression and white privilege.

Often times Black History Month is treated as a time for women and men of African descent to celebrate their cultural patrimony and history. This is certainly a good outcome of the civil designation. Providing greater visibility to African American heritage is always a good thing. However, the commemoration also ought to remind white women and men — such as myself — that ours is not the only history, our experiences are not universal experiences and our perspectives and cultures should not be viewed as normative.

One of the unintended drawbacks of Black History Month as a social and educational phenomenon is that it gives cover to white vincible ignorance. White students are often exposed only to a predetermined, sanitized and a selected few historical figures of color, who are treated as exceptional or exotic, presented so as not to rock the boat of racial injustice or threaten the sense of moral superiority and racial rectitude among white populations.*

I only have to recall my own well-intentioned but notably inadequate upstate New York elementary and secondary Catholic schools' presentation of figures like Martin Luther King Jr., Rosa Parks, Frederick Douglass and Harriet Tubman. As presented, there was nothing challenging about what they had said or done. Their heroic actions were historically conditioned such that we could look back with the hindsight of the late 20th century and justify the pretend narrative that things used to be really bad in the past, but thank God these aren't real problems today.

Absent from the whitewashed curriculum was the broader social context and dangerous memory of chattel slavery, white supremacy and intersectional injustice that King regularly highlighted in the trifold reality of race, poverty and violence. Likewise, there was no serious engagement with the lives and work of more "radical" (a label typically used to dismiss) civil rights leaders and authors such as Malcolm X, James Baldwin, or Angela Davis.

Similarly, I do not recall hearing a single lecture in school or homily in church that acknowledged the realities of either the Catholic Church's complicity in the sin of racism or the longstanding history of Black Catholics.

On the former point, only in recent years have isolated religious congregations and institutions such as the Jesuit community at Georgetown University and some congregations of women religious begun to grapple with their experiences of the two-sided coin of racial oppression and white supremacy. At the national level, the U.S. bishops' conference most recent document on racism — its first in nearly 40 years — falls shockingly short of acknowledging such complicity, identifying the persistence of white supremacy and naming the sinners that are culpable for the "sin of racism."

On the latter point, scholars have been doing important work for decades in an effort to raise greater awareness of the Black Catholic community that has been present on this continent for centuries. The classic study of this history is the late Benedictine Fr. Cyprian Davis' 1990 book The History of Black Catholics in the United States. The work of theologians like Dominican Sr. Jamie Phelps and Boston College professor emerita M. Shawn Copeland have collected essays highlighting the distinctive yet underappreciated contributions and experiences of Black Catholics in the American context. More recently, church historians and social scientists including Matthew Cressler and Darren Davis and Donald Pope-Davis have authored monographs about black Catholic identity in the United States. 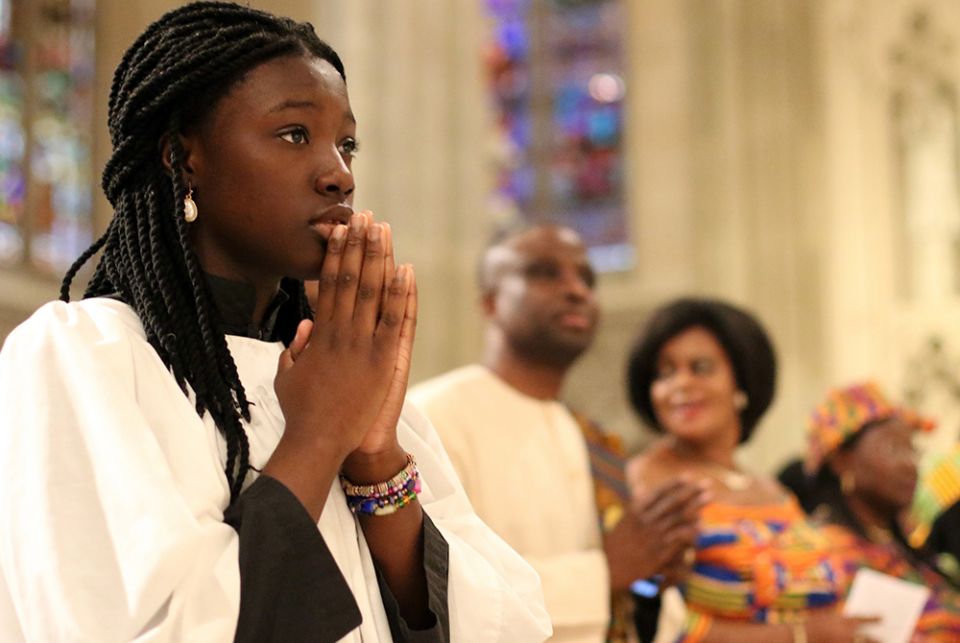 An altar server processes toward the sanctuary at the beginning of the annual Black History Month Mass at St. Patrick's Cathedral in New York City Feb. 4, 2018. (CNS/Gregory A. Shemitz)

But this point was made most clearly and directly last month in an article written by Shannen Dee Williams, a historian at Villanova University, titled: "Black history is Catholic history." Williams states the stark fact that:

In the United States, where the roots of many black Catholics predate those of the vast majority of white and white ethnic Catholics by at least three centuries, popular and scholarly discussions and depictions of the American Catholic experience rarely include the church's black faithful. At best, black Catholics are presented as historical anomalies. At worst, they are altogether erased.

The summary takeaway is simple: the white church in the American context has not been truthful about its own history. Given that the church is inextricably "in the modern world," as Vatican II states in Gaudium et Spes, and not "apart" from the world, it is not surprising that the way this nation narrates its civil history is reflected in the way the church in this country expresses its own past and self-understanding. White Catholics, especially many in leadership, have not yet reckoned with what the church as an institution and its members have done and what they have failed to do.

It is not enough for us to individually and collectively lament the sins of the past and celebrate selected civil rights heroes that have been pre-approved and redacted to avoid discomfiting whites. While Black History Month is an opportune time for children, women and men of African descent to celebrate their legacy, this time of commemoration offers a particular challenge and opportunity for whites like me.

I need to be made uncomfortable; to risk vulnerability and open myself up to the painful truth that I am part of a society that is steeped in what Fr. Bryan Massingale calls "a culture of racism." Unwittingly, I and everybody else in the United States have been socialized and affected by a structure of racism that simultaneously subordinates minoritized communities and elevates those who are identified (or identify) as white.

Whiteness, then, is presented as normative in terms of culture, music, dress, diction, food, behavior and worship, among so many other categories. Such a culture of meaning making becomes internalized in minoritized populations and concurrently bolsters a sense of entitlement and privilege in those who are identified as part of the majority. Racism is reduced to discrete acts of animus by and against individuals, and false narratives are woven into our collective history to justify racial injustice on grounds other than the truth.

The very nature of structural racism preserves itself and perpetuates injustice by making it appear invisible to the beneficiaries, thereby setting up those in positions of power to become defensive, dismissive and even violent when confronted with the truth always already at work. This is the case as well in our church as much as it is elsewhere in the world. The only way for whites to begin seeking authentic racial justice is to first acknowledge the two-sided coin of racism and white supremacy and own one's complicity within this system.

This is something that the late Trappist monk and author Thomas Merton sought to do in his 1963 essay, "Letters to a White Liberal." Inspired and challenged by King's "Letter from a Birmingham Jail," Merton sought to examine the nature of racism in the church and world, seeing for himself the uncomfortable truths that surfaced when he listened to his brothers and sisters of color. He explained at the end of his lengthy essay that: "I have spelled it out for myself, subject to correction, in order to see whether a white man is even capable of grasping the words, let alone believing them." And then alluding to Jesus' saying in the gospel, Merton added: "For the rest, you have Moses and the Prophets: Martin Luther King, James Baldwin and the others. Read them and see for yourself what they are saying."

Like Merton, I am a white male cleric, someone who also resides in a social location at the intersection of unearned and unsolicited power and privilege. As someone who unwittingly benefits from racial injustice, who has been socialized not to ask tough questions or acknowledge racist complicity, and who is inherently complicit in the perpetuation of white supremacy in the church and the world, it is incumbent on me to continue the ongoing self-examination necessary to contribute to the work of anti-racism. This is a lifelong struggle because our culture of racism is a life-shaping phenomenon. It is not something that can be accomplished in just one month out of each year.

[Daniel P. Horan is a Franciscan friar and assistant professor of systematic theology and spirituality at Catholic Theological Union in Chicago. His most recent book is Catholicity and Emerging Personhood: A Contemporary Theological Anthropology. Follow him on Twitter: @DanHoranOFM]

Making work a garden, not a nightmare

Will we ever know the truth?