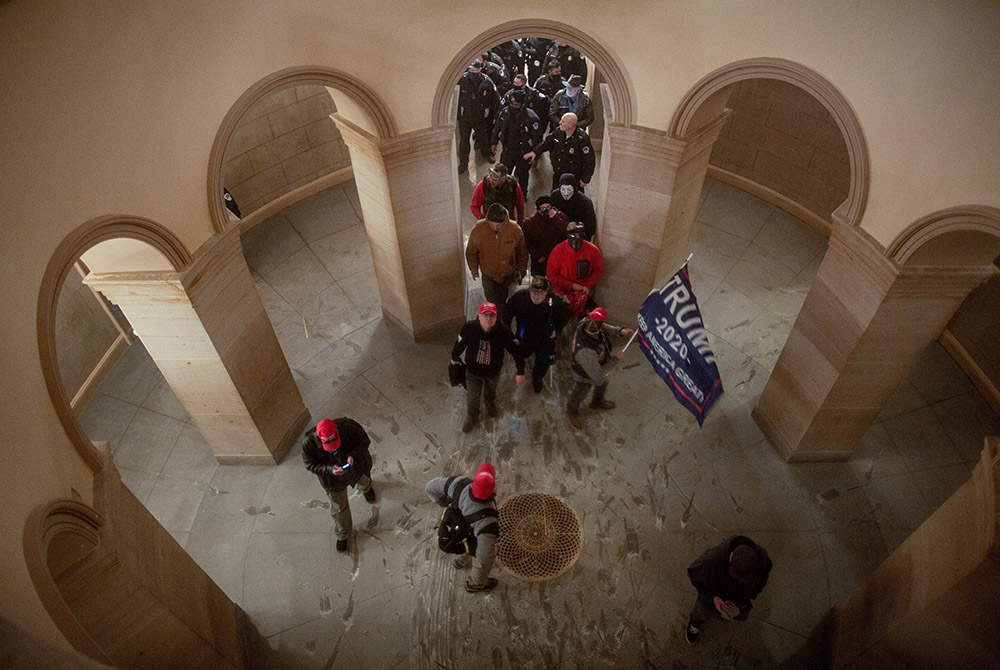 Supporters of President Donald Trump storm the U.S. Capitol in Washington Jan. 6, after a rally to contest the certification of the 2020 presidential election. (CNS/Ahmed Gaber, Reuters)

Learning the Ten Commandments is one of the first things we were taught about the moral life as children. They were not exactly easy to understand, although mom and dad made sure we grasped the import of the fourth: Honor thy mother and father! Coveting, adultery and killing seemed remote possibilities, and it is only with adulthood that we really recognize that it is the First Commandment — "I am the Lord, thy God; Thou shalt not have strange gods before me." — that may be the most difficult to keep in this consumerist culture. Funny that they remain emblazoned in memory in the English of the King James Bible, at least for me.

By comparison, the eighth was one of the easiest to understand: "Thou shalt not bear false witness against thy neighbor." The violations of it are as easy to spot today as they were when we were children. And last week, after some of the text messages sent to then-White House chief of staff Mark Meadows became public, a whole raft of such violations against the Eighth Commandment became all too evident, especially from one of the most prominent Catholics in the media, Laura Ingraham.

"Mark, the president needs to tell people in the Capitol to go home," Ingraham texted Meadows. "This is hurting all of us. He is destroying his legacy."

Us? Ingraham traffics in opinion more than in reporting, but still, a little journalistic distance from a story is important even for those of us on the opinion side of the ledger.

That is not the biggest problem with the text, however. The text proves that she knew as the riot was happening, that it was being carried out by Trump's supporters, and that the then-president could do something to stop it. But I remember being disgusted when she tried to blame the largely mythical antifa for causing the violence at the Capitol.

"Earlier today, the Capitol was under siege by people who can only be described as antithetical to the MAGA movement," she told viewers that same day. "Now they were likely not all Trump supporters, and there are some reports that antifa sympathizers may have been sprinkled throughout the crowd. We'll have more on that later." Ingraham was lying and she had to know she was lying. She is not a stupid woman.

Ingraham and her colleagues have downplayed the Jan. 6 insurrection ever since. There have been "many riots in American history were far worse than this," she said in July, specifically mentioning the mostly peaceful Black Lives Matter protests after the murder of George Floyd.

Then, when the texts were publicized at a meeting of the House select committee investigating the insurrection, Ingraham pretended there was nothing outrageous about her duplicity. She accused "left-wing media" of going into "spin and defame mode." But she then proceeded to walk back her Jan. 6 comments about antifa, saying they had not been "substantiated." Then why did she float the idea in the first place?

Ingraham also said she had never promoted "the big lie" about the election being stolen, but she and her colleagues routinely sound the alarm about nonexistent voter fraud and the need for legislation to counteract it. And, just this week she continued to cast doubt about the efficacy of public health measures needed to combat COVID, which may be a different lie, but it is just as big as the lie about the election being stolen.

What is especially concerning for Catholics is that Ingraham's nightly sidekick is none other than EWTN's Raymond Arroyo. He shows up toward the end of almost every episode and the two engage in some snarky comments about people and ideas. They are fond of suggesting that President Joe Biden is not mentally fit because he jumbles his words sometimes, that sort of thing. It is not serious analysis or commentary. Arroyo also fills in for Ingraham when she is on vacation.

On his EWTN show last week, Arroyo did not mention the controversy surrounding the Jan. 6 texts. He continued to appear on Ingraham's show through the week. All as if nothing had happened.

Something did happen. Some of the biggest stars of one of the nation's biggest networks, Fox, were proven to be dishonest about one of the biggest stories of the year and to have violated the first principle of journalistic ethics: Do not become part of the story. And the Catholic Church's largest media outlet is in bed with that network.

Perhaps none of this should surprise, and in one sense it doesn't. Tucker Carlson, Sean Hannity and Ingraham all begin their shows with angry and tendentious monologues. What we learned this week is that they know they are being tendentious. This is not a matter of coming at a set of facts from different perspectives. This is about saying one thing in private and something completely different in public.

At a real news outlet, Ingraham and her ilk would be sacked.

At a real Catholic news outlet, all ties would be cut with Fox.

To modify a proverbial saying with the addition of a single adjective: Truth is the first casualty of a culture war.

Related: Boston's Cardinal O'Malley defends Francis against attacks from EWTN critics
Related: It's time for US bishops to reconsider relationship with EWTN