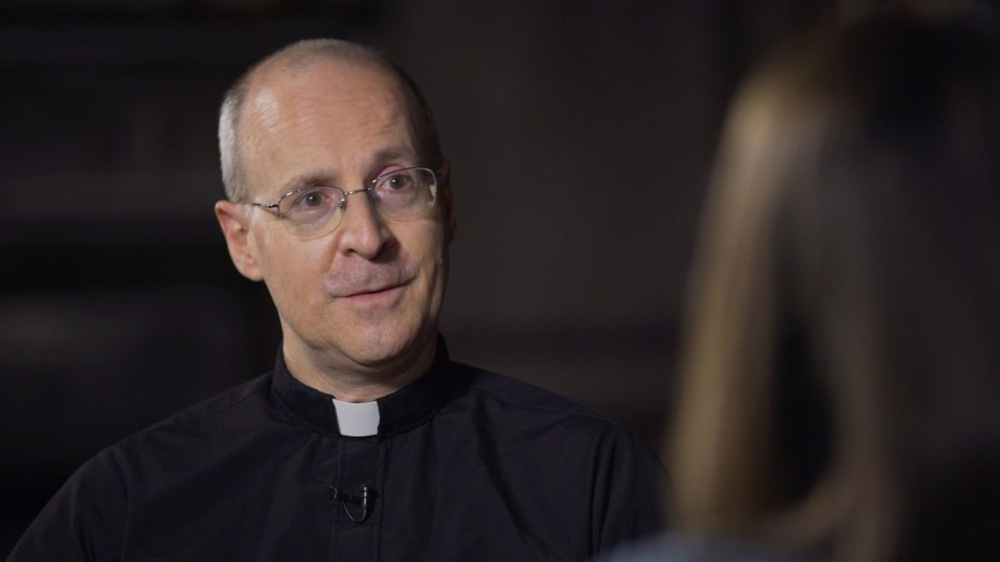 Austin Ruse's vulgar and childish Twitter attacks on Jesuit Fr. James Martin could be ignored if they were not so emblematic.

Ruse claimed something Martin has written was "pansified." Now, I happen to like pansies and intend to plant many of them in my garden next year. As an insult, I think the last time I heard it used I also carried a Captain Kangaroo lunchbox to my second grade classroom.

Ruse tweeted that Martin was "a perfidious priest" who was "leading young men to perdition." Perfidy is not the stuff of a playground taunt nor a neologism crafted by white nationalists. It is a serious charge, and it demands a response. I should like to respond.

Jim Martin has written more books that are more likely to become the focus of a parish book club than any living American. Think about the number of times, in casual conversation with serious Catholics, the titles of his books get mentioned: This person loved his book My Life with the Saints, and another gave a copy of Jesus: A Pilgrimage to all of his children. A Jesuit Off-Broadway delighted still others. The Jesuit Guide to (Almost) Everything brought Ignatian spirituality to thousands of people seeking spiritual wisdom but who were, for a variety of reasons, unfamiliar with the sources. The list goes on and on.

Martin's essays at America magazine are to their readers what Sr. Joan Chittister's essays are to readers: Essential spiritual writing that remind those of us who write about issues and personalities that the personality at the heart of our enterprise walked on the shores of the Sea of Galilee 2,000 years ago and is still present and active in the life of the church.

In short, Fr. Jim Martin is a churchman. A gifted writer who has taken his gifts and placed them at the service of the church, building up the Body of Christ, helping Catholics discover and construct (the two go together) a spirituality that is true to our Catholic faith in its essences. This is not easy to do in a hyper-individualistic and hyper-materialistic culture like our own in which even the spiritual patrimony is decidedly un-Catholic or anti-Catholic. By way of contrast and example, Martin did not, and could not, write a book entitled The Catholic Moment, because Martin understood what Richard John Neuhaus did not, that every moment is a Catholic moment, that while Protestant spirituality, in both the Lutheran idiom that formed Neuhaus and the Calvinist idiom that has been dominant in American culture, has always minimized the Incarnation, Catholic spirituality is deeply incarnational. For us, every moment is a Catholic moment because the Incarnation is always breaking into history. Martin brings that incarnational spirituality to life for thousands upon thousands of Catholics.

Now, Martin has touched off a controversy with his latest book, Building a Bridge: How the Catholic Church and the LGBT Community Can Enter into a Relationship of Respect, Compassion, and Sensitivity. It is not my favorite book on the subject. Martin is reluctant to say what I will say: The church's teaching on homosexuality is inadequate and in need of development. The book makes a more modest request, that Catholics follow the example of Pope Francis, and the example of the Master, in being less quick to condemn those who are gay, that we not forget the church's teaching on human dignity in the heat of moral argument, and that sometimes history has deposited so much acrimony and so many misunderstandings into a relationship that we all need to step back and start again, the way an actor who has muffed up a scene sometimes needs to leave the stage and start again from the top.

I suspect I also differ with Martin on this topic in that I think charity requires us to not only acknowledge the theological hurdles that exist in building this bridge, but that some of those hurdles may prove insurmountable.

Not to put too fine a point on it, but what has Ruse done? He, too, is a prolific writer. In February, he wrote a paean to Steve Bannon that was so effusive, I found myself wondering if he had a man crush on the president's then-senior adviser. Ruse noted in that article that he had written several hundred stories for Breitbart. I understand there are those who pull conservative lessons from our faith, and end up taking different stances from me, but the alt-right? He is not alone in thinking, wrongly, that one can keep one foot in the church and one foot in the racist and misogynistic world of the alt-right: Former priest, and erstwhile defender of Fr. Marcial Maciel, Thomas Williams manages to write for both Breitbart and Crux, a fact that is inexplicable to me.

Ruse's usual fare, as you can see from this list of article titles at Crisis magazine tends towards an unnatural focus on the dangers of homosexuality and, for that matter, any forms of sexuality that do not conform to the biological calibrations of Aquinas. The subject of sex seems to fascinate him. He writes the occasional attack on Muslims, an attack on "elites" and other typical right-wing fare, but sex is his bread and butter. He epitomizes those pelvic Catholics whom Pope Francis had in mind when he said the church must not be obsessed with abortion, contraception and homosexuality.

But, it gets worse. A quick read of Ruse's writings discloses that he is not one of those people who cling to the church's teaching but, mindful that the teaching may be hard for some, seek to demonstrate their respect for them even while delivering bad news or to engage in dialogue. I admire such conservatives. Ruse, by contrast, seems to adopt the most hurtful interpretations possible and hurls them at the feet of others the way medieval knights once hurled gauntlets. It may still be shocking that he sent such vulgar tweets but it is not surprising.

To Ruse and the other fire-eaters who traffic in this in-your-face Catholicism, a gentle soul like Jim Martin is a threat. To people who find themselves writing for fringe outlets like Crisis, rather than established and serious journals like America, Martin's enormous influence may be a further prod to enmity. To most American Catholics, Martin is one of the sons in whom we take the most pride, a churchman who helps others grow in their relationship with the church and with its head, Jesus, a priest who makes ancient traditions accessible to modern readers. And, to those of us who have known him as a colleague, the private Fr. Martin shines with the same wit and holiness and pastoral solicitude as the readers encounter in his writing. He is a treasure and his works will be read long after the fire-eaters have been forgotten.