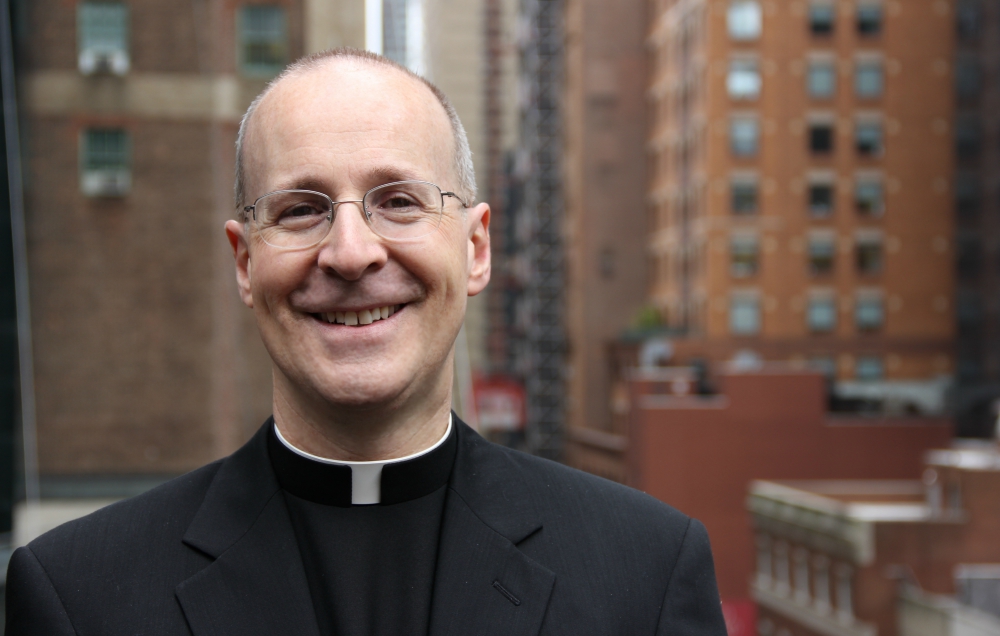 Since its publication, Jesuit Fr. James Martin has pledged to continue the conversation his latest book, Building a Bridge, opened about LGBT Catholics and the church. That has meant at times responding to critiques, and at other points, fending off harassment on social media. 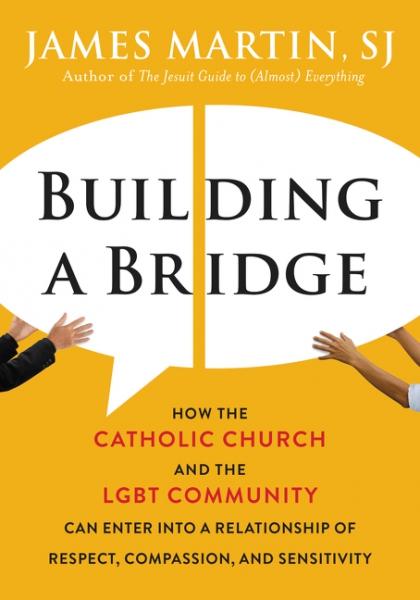 The latest online fray came Sept. 4 from Austin Ruse, president of the Center for Family and Human Rights, or C-Fam, and a columnist for Crisis magazine. On Twitter, Ruse accused the popular Jesuit priest of "harming souls," "leading poor gays to perdition," and at various points called Martin "pansified," "effeminate" and "out of the closet."

The tweets from Ruse, who also writes for the Breitbart website, began in response to a separate exchange on the social media platform three days earlier between Martin, editor at large of America magazine, and CatholicVote.org, a conservative political organization.

On Sept. 1, CatholicVote.org said on Twitter, "And then this Dominican showed up and started beating @JamesMartinSJ like a rented mule. The crowd went wild."

Martin replied by saying "Enough," and condemned any encouraged violence against him, even in a joking manner. He added he reported CatholicVote.org to Twitter.

The original CatholicVote.org tweet was deleted and its Twitter account was suspended for 12 hours, its communications director Joshua Mercer told NCR. Mercer said in an email Sept. 6, "To suggest that our tweet was an incitement to violence is total garbage and can't be taken seriously."

Ruse later learned of the exchange and shared the view that the tweet didn't amount to an actual threat of violence. On Monday, he tweeted, "@jamesmartinsj 's response to a figure of speech is so pansified. I do believe he's out of the closet."

That tweet was also later deleted, Ruse confirmed with NCR, saying he did so because he thought it would go viral. He said Martin's response was "rather snowflakish," comparing him to college students seeking safe spaces on campuses.

Martin did not reply directly to Ruse, but instead posted on Facebook a screenshot of the tweet, and wrote, "Insults and slurs like 'pansy' are what LGBT people face every day, even from Catholics. But hatred and contempt, like this public example posted today on Twitter, only strengthen my desire to advocate for LGBT people, especially within our church.

"Many Catholics ask me if there is still real homophobia in the church, and so it's important to have public examples like this one. ... It's important for Catholics who may doubt the need to advocate for LGBT people in the church to see this kind of public contempt."

Words like "pansy" and other insults, Martin continued, "make LGBT people feel 'less than.' What I'm trying to do, with help from many of my brothers and sisters and siblings, is make them feel like beloved children of God."

Turning people in is just so effeminate. Man up, Jim.

He is not a good priest. He is harming souls. He is the opposite of charity. He's leading the innocent to damnation

He leads poor gays to perdition. He is an awful priest. He'll have lots to answer for.

At one point Monday, Ryan Anderson, a fellow with the conservative Heritage Foundation, responded to Ruse by saying, "No one should use slurs. And when 'public' Catholics do, it hurts the Church's efforts even more."

On this, Fr. @JamesMartinSJ is correct. No one should use slurs. And when "public" Catholics do, it hurts the Church's efforts even more. https://t.co/VcoxwQY492

In a reply the next morning, Ruse asked Anderson:

@jamesmartinsj is a perfidious priest leading young men to perdition. Is that a slur? @RyanTAnd

Right. No apology coming from me though. I am doubling down. Jim Martin is a perfidious priest, a beta male leading young men to perdition.

Ruse told NCR he didn't regret his original tweet or the subsequent 100-plus on the matter, and stood firm in his belief that Martin handled the situation poorly and should have reached out to Catholic Vote directly.

"We are told endlessly that we should confront our interlocutors one-on-one. What he did instead was hold them up to sort of mob rule on social media, which is what he's done to me," said Ruse.

He noted that among the more than 700 comments on Martin's Facebook post are attacks against him, including several who expressed a desire to punch him in the face. He called on Martin to urge his followers to cease such attacks, including calls for his termination, and to take down the Facebook post.

The episode with Ruse is the latest response from conservative Catholic circles to Martin's book, Building a Bridge: How the Catholic Church and the LGBT Community Can Enter Into a Relationship of Respect, Compassion, and Sensitivity. Far-right groups like Church Militant and LifeSiteNews have taken to writing about Martin almost daily.

No stranger to internet trolls, the media-savvy Jesuit told NCR that since the book was published, the attacks have "really intensified," and he has muted a couple hundred Twitter accounts as a result. "Calling me much worse than pansy," he said, including homosexual slurs and a heretic.

But those extreme reactions, he said, represent a sliver of the "overwhelmingly positive" response to Building a Bridge he has heard from the pew level in roughly two dozen talks, and in conversations he's had with bishops, some who have privately offered their gratitude. As for people at the extremes of the right and left who have been swift and unwavering in writing off the book, he suspects a reason might be that they haven't actually read it.

"Most of the people are probably not reading, because if they read it, I don't think they'd find much objectionable in it," he said. Martin recalled a conservative priest friend came up to him after one talk and told him he read the book and didn't see what all the fuss was about.

Ruse said he has not read the book, but has watched several videos of talks Martin has given on the subject.

The 160-page Building a Bridge is billed as an attempt to open a dialogue among the church hierarchy and LGBT Catholics to ease tensions and develop understanding. It originated with a speech Martin gave last October at a New Ways Ministry gathering, and was in part sparked by the terror attack that June at an Orlando, Florida, nightclub popular with lesbian, gay, bisexual and transgender people.

Martin, who in April was appointed by Pope Francis a consultor to the Vatican's Secretariat for Communication, has made a point to enter into dialogue with the Catholic community about the church's relationship with LGBT Catholics. That has included presentations, most recently at Fordham University and Villanova University, as well as written replies to critiques from columnists and other clergy, including from Cardinal Robert Sarah.

Martin said he is happy to converse with people, even critics, if there's fertile ground for dialogue. But there are points where he draws a line.

"If they're clearly motivated by hate and contempt and disgust, for even the possibility of listening to the concerns of LGBT Catholics, then it's probably not worth engaging them," Martin said. "But if it's a thoughtful critique and raises good points, I'm happy to engage it."

A version of this story appeared in the Sept 22-Oct 5, 2017 print issue under the headline: Martin in social media fray over LGBT conversation.