How dark money prostitutes the US church and distorts Catholicism 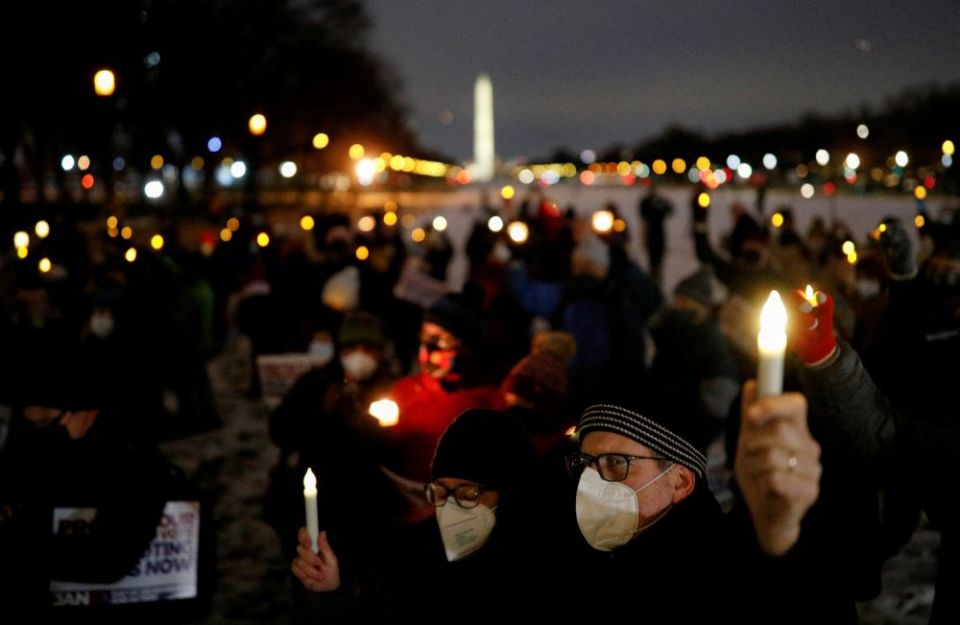 People hold up candles during a candlelight vigil on the National Mall in Washington, D.C., Jan. 6. It was the first anniversary of the attack on the Capitol by supporters of former President Donald Trump. (CNS/Reuters/Tom Brenner)

My colleague Brian Fraga's article last week detailing the financial networks that link conservative Catholic organizations with groups that organized the assault on the U.S. Capitol last year was chilling. That chill should haunt every U.S. prelate. The distortions of our faith brought on by the culture wars have been mixed with treasonous politics by a well-funded network that is willing to wink at Trumpian fascism.

Let's be clear: People who deny election results, who allege voter fraud without producing any evidence of such fraud, who try to get others to "find" votes, and who try to stop the official certification of an election are assaulting our democracy. Period. Full stop. If those things are not treason, what is? And there is nothing in Catholic teaching that views cooperation with treason as morally neutral or otherwise unobjectionable.

So, when Catholic University philosophy professor Melissa Moschella told Fraga, "Part of living in a world where things are morally messy is that to do good, you have to cooperate with people and organizations that are doing some things that you disagree with," she wasn't wrong but she was missing the point. Treason is not something you simply "disagree with."

By way of comparison — and I do not mean to suggest that politics is a game — in football or basketball, there are different styles of play, quarterbacks and point guards with different skills, defenses with different formations, etc. All that makes the games interesting and exciting. But if someone is cheating, that is no mere difference. It is a difference that undermines the entire premise of the game.

The events surrounding Jan. 6, 2021, were not political differences. They sought to undermine the Constitution, not to debate it. We are right to stigmatize it and those who perpetrated it. And while the distinction between words and actions is one of the most cherished principles of liberalism, there are some words, like the "big lie," that lead to violence by a direct enough route as to also require stigmatization.

Moschella's observations are insufficient in another aspect as well. She focuses on whether or not an organization receiving money from a controversial donor network will be compromised and concludes that such compromise would happen only if there were strings attached to the gift. "But if it's just a matter that this group happens to support my position because I'm pro-life but they also support other things that I don't agree with, then fine, I can work with them because we share a common pro-life commitment even though I disagree with them on other things," she told Fraga. This is true but not exhaustive.

There are ways to inoculate oneself against such corruption. Reading Fraga's article I was reminded of an incident when the Rev. Jerry Falwell's Liberty University ran into financial trouble in the 1990s. Two former fundraisers for the school came forward to help. They received much of their financial backing from the Rev. Sun Myung Moon, whose esoteric beliefs were deeply offensive to Bible-believing Christians like Falwell. Nonetheless, Falwell took the money, and when news leaked that it had come from Moon, Falwell gave an interview to Christianity Today. "Be assured I will operate on Billy Sunday's philosophy: The Devil’s had it long enough, and quickly cash the check," he told the magazine.

It would be one thing if conservative Catholic organizations demonstrated the kind of chutzpah that Falwell possessed, his evident disdain for the source of the money shining through. That is not how it works in Washington. Men like the Federalist Society's Leonard Leo and investment banker and philanthropist Sean Fieler, with access to vast amounts of money, their own or others', can pick up the phone, call an organization like the Susan B. Anthony List or the Catholic Association Foundation, and ask them to get involved in some area beyond their normal reach. Are the groups really in a position to say no if they have become dependent on the money that donor is already giving them?

The result is groups like SBA List join up with the Fieler-funded American Principles Project to launch a new initiative about "election transparency" being led by former Trump aide Ken Cuccinelli. Why would a pro-life group get involved in that issue?

"The pro-life movement must engage in election transparency and integrity reform or their ability to elect pro-life, pro-family lawmakers — and pass laws that save lives — will be greatly diminished, if not extinguished," Cuccinelli said in a press release announcing the project.

In a sense, Cuccinelli is right: The fate of the pro-life movement is now wedded to the Republican Party, and the Republican Party has decided it needs to follow Donald Trump about the "big lie" that the 2020 election was stolen. But this level of interpenetration among groups demonstrates that the relationship is not even one that would be covered by the term "allies." It is more like the relationship between the infantry and the cavalry in a single army. They are no longer just making common cause. They are pursuing a singular cause, and that cause is political, not religious. If the SBA List wants to choose such a path, that is one thing, but organizations with the word "Catholic" in their title should be more judicious. 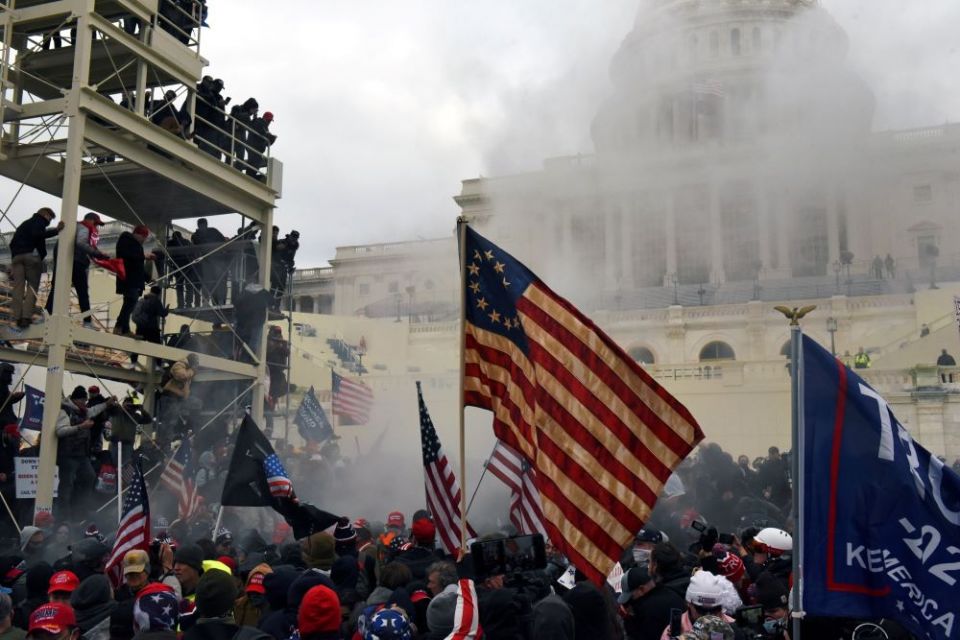 Supporters of U.S. President Donald Trump protest in front of the U.S. Capitol Building in Washington in this Jan. 6, 2021, file photo. (CNS/Reuters/Stephanie Keith)

I was unfamiliar with the Catholic Association, so I went to their website, and I am still not sure what they do. "The Catholic Association (TCA) is dedicated to being a faithful Catholic voice in the public square," the website states "TCA is responding to the call of the Catholic Church for members of the lay faithful to apply Catholic teaching, wisdom, and principles to the issues of the day." It sounds positively wholesome.

How does TCA accomplish this good work? That is a little murkier to determine. Under the heading "Staff" on the website, they list four senior fellows, but no executive director, no communications director, no program director. Their 990 tax form lists one of the senior fellows, Ashley McGuire, as the organization’s "director, president" for which she is paid $71,000. The tax form says she works five hours per week. Nice work if you can get it. And what does she do for that handsome salary? Well, she penned a defense of EWTN in the National Review, which the TCA website is keen to share. Odd that they do not mention it was the pope himself who criticized EWTN!

Where does the rest of the money go? Leonard Leo got $120,000 for "consulting." TCA donated $1,575,000 to the Catholic University of America and $250,000 to the Catholic Information Center, two D.C.-based organizations that are deep in the conservative Catholic religio-political network of culture warriors. Those are some lush gifts. You might be tempted to think that TCA puts the "lush" back into "slush fund."

This isn't simony, but a different kind of corruption. The failure to see how the culture wars have distorted Catholic teaching and prostituted the faith to the political goals of some rich fat cats is by now a willful moral failure and, what is worse, a willful ecclesiological failure. Fraga’s reporting should be a wake-up call to the U.S. bishops and to the Holy See.

If you want to know why the church in the United States is so much more hostile to Pope Francis than any other national church, don't look to the Scriptures. Look to the 990s of these right-wing Catholic organizations.

Opinion | How dark money prostitutes the US church and distorts Catholicism

Keep the culture wars out of the classroom