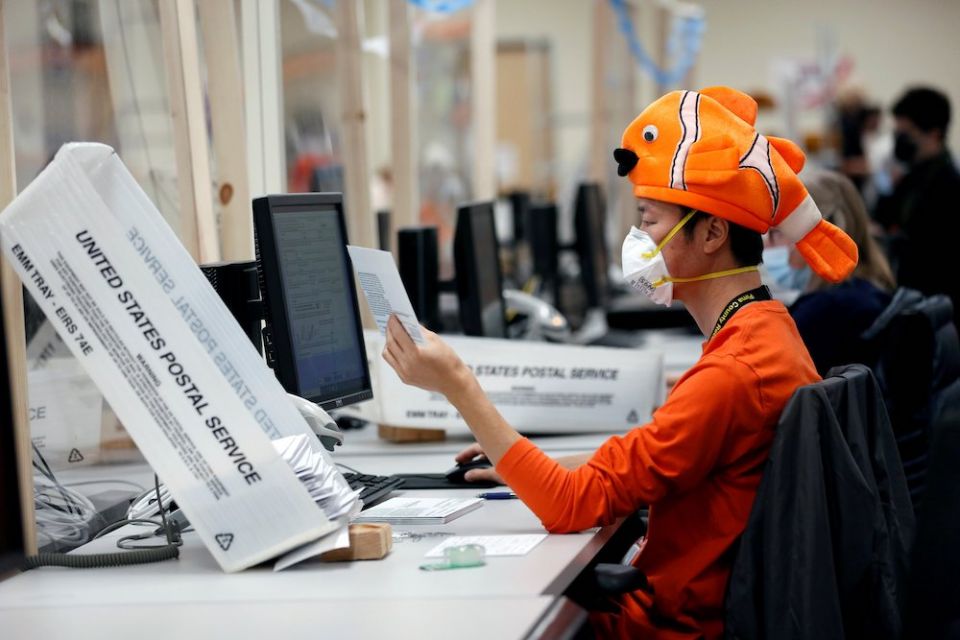 An employee in Tucson, Arizona, wears a Halloween costume Oct. 31 while processing early voting and absentee ballots ahead of the upcoming presidential election Nov. 3. (CNS/Reuters/Cheney Orr)

So, it is possible we will not know tonight who will be the next president, but we already know that "It is you, dear President, who are 'the one who opposes' the deep state, the final assault of the children of darkness." At least, that is how the disgraced former nuncio Archbishop Carlo Maria Viganò explains it in a new open letter to President Donald Trump. Read the whole thing, and the next time you wonder about the quality of the American episcopate, remember that this man played a pivotal role in the selection of bishops for five long years, from 2011 until 2016. Perhaps he should start his own ecclesial community, the Qatholic church.

The U.S. Elections Project has some outstanding data on early voting totals. One of the things that jumped off the page at me was the fact that in North Carolina, 1,281,265 of those who have already voted, 28.3% of the total, did not vote in 2016. And I breathed a sigh of relief when I saw that, in the all-important Commonwealth of Pennsylvania, fewer than 1,000 mail-in ballots statewide have been rejected as of Sunday night. In Michigan, 1,741 ballots had been rejected, or 0.1%. This morning, I will be checking their latest totals in preparation for tonight's results.

At Politico, a look at the effort to get Latinos registered to vote and then make sure they do so. The article emphasizes the role Donald Trump and his anti-immigrant policies have played in motivating Latinos to become politically involved, but former sheriff and anti-immigrant loudmouth Joe Arpaio paved the road Trump has traveled. The article also notes the role played by Unite Here, the union that represents workers in the hospitality industry that has been decimated by COVID-19. Labor, like the Catholic Church, is ahead of the demographic curve when it comes to Latinos, and the two groups should be working hand-in-glove to make sure immigration reform gets passed if the Democrats win this election.

In The New York Times, a deep dive into the attitudes of some Trump supporters in rural Nebraska. Democrats need to figure out how to speak to people like Jonathan Rempel, the farmer profiled in the piece. They may never convince him to vote for them, but only by listening to people with whom we disagree, making sure they know we are listening, will we help to heal the divides in this country.

The Democrats can start trying to heal the country — and make their party more electable and less elitist — by listening to those Democrats who do not subscribe to all the orthodoxies demanded by the special interest groups that traffic in litmus tests. Our friends at Millennial launched their "Whole Life Rising" podcast with Democrats for Life by interviewing Justin Giboney, who is precisely the kind of person the Democrats need to listen to, a young African-American male who is deeply invested in his church and his community.

In The Washington Post, University of Houston politics professor Brandon Rottinghaus discusses the prospects of Democrats winning the state House of Representatives in the Lone Star state. The tale is not only one of changing demographics but of political hubris: The downside of controlling redistricting so that you create a lot of safe seats is that you no longer need to appeal to anyone outside the base of the party, which dominates voting in a primary. The state's GOP has moved steadily to the right and might now be too conservative for too many fellow Texans. "Republicans have proved collectively incapable of soul-searching," he writes.

At FiveThirtyEight, a look at advertising on the race and the question: Does it matter? Increasingly, at the presidential level, there are better ways to spend campaign dollars and no amount of money is going to guarantee success. Just ask Mike Bloomberg. He spent half a billion dollars on his presidential candidacy, and Sen. Elizabeth Warren needed all of 60 seconds to eviscerate his campaign and prove that all that money was wasted. The country owes the senator a debt for many reasons, but that is one of the top three.

Looking ahead, Politico offers some speculation about what Trump might do if he loses. The idea that he would flee to a foreign country to escape prosecution for criminal wrongdoing is a fine and welcome idea, and it would spare an incoming administration some difficult decisions about whether or not to prosecute Trump. But the reckoning with Trumpism will need to happen whether Trump is in Florida or Saudi Arabia.

As impeachment looms, evangelicals defend Trump but pass on debating the issues