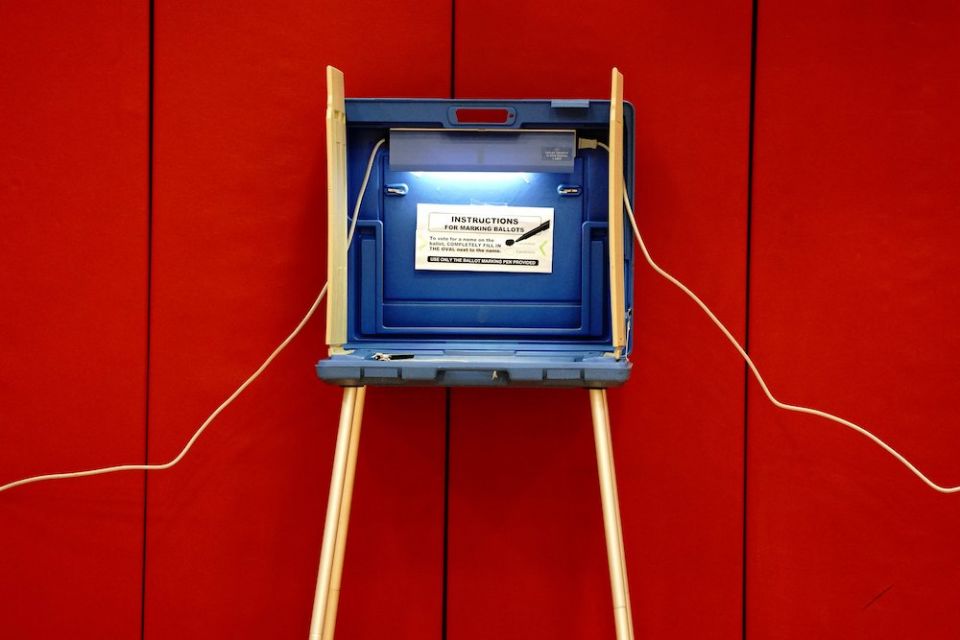 A voting booth is at a polling station inside Knapp Elementary School in Racine, Wis., on Election Day Nov. 3, 2020. (CNS/Bing Guan, Reuters)

This is the stuff of nightmares: At Politico a look at some GOP state officials who believe the big lie that Trump really won the 2020 election and who are now running for those positions that oversee elections. Few people pay much attention to these contests for positions such as secretary of state, but imagine if, say, in Georgia and Arizona, state election officials had not done their constitutional duty?

At New York Magazine, David Wallace-Wells asks if the goal of limiting the increase in average world temperature to 1.5 degrees, as set by the Paris accords, is still possible? If not, is the 2 degrees goal possible? Climate scientists are clear, but it is far from clear if political actors understand that "short-term commitments are much more important than long-term pledges." Wallace-Wells opens by noting that since the last time we saw the cicadas — 17 years ago — 40% of all the carbon emissions in the history of the human race were emitted into the atmosphere. It is a staggering thought.

In The New York Times and almost on cue, Basma Ghalayini's essay is a perfect example of the unwillingness to hold Hamas responsible for any of the recent violence. Ghalayini argues that the conflict is simple — it is not about religion or politics, it is about a sense of home. But insofar as the conflict is also about a sense of home for many Jews, this framing makes a resolution impossible. The article is designed to hope you miss that fact.

In The Washington Post, Michael Scherer and Josh Dawsey examine the struggle within the Republican Party to define itself, as veterans of the Reagan Revolution have trouble getting the veterans of the Trump Revolution to care about things like excessive government spending. The writers — and those they quote — do not put it this way, but I shall: One wing of the GOP believes things like trickle-down economics that are false but plausible, while the other believes things like the 2020 election being stolen that are false and crazy. What a choice?

At The Guardian, a report on Charles Koch funding efforts to rescind prohibitions on evictions during the pandemic, while his corporation was investing heavily in real estate. Even if he had no financial interest in the matter, it was still a crummy thing to do. This is the man whom Catholic University's Business School lavished praise upon at a conference a few years back.

Did I spot Bishop Thomas Paprocki and University of Notre Dame law professor Gerard Bradley at a pro-choice rally? It is hard to be sure. The two co-signed a letter to the editor at The Observer, the student newspaper at Notre Dame, complaining about the school's requirements that its students, faculty and staff get vaccinated. The reasoning comes down to "You can't tell me what to do with my body," which is an argument we have heard before.

Everything about this article — "When Scientific Orthodoxy Resembles Religious Dogma" — at Scientific American gives me the giggles. Avi Loeb argues that the skepticism on the part of other scientists that greeted his most recent book Extraterrestrial is misplaced and akin to religious dogma. I think his argument is a slur against dogma. For example, he asserts, "All these rivers of wrongdoings in the form of organized science or religion flow from the sea of authority — the interpretation of evidence or lack thereof to protect groupthink from doubts by ridiculing alternatives." I think when we RCs preserve the deposit of faith, "groupthink" has nothing to do with it. But the kicker is the disclaimer at the end of the article: "This is an opinion and analysis article." The article makes some excellent points but, still, someone should remind Loeb and the editors that epistemology is a distinct discipline.

It is never too early to start planning for Christmas, and devoted readers who would like to get me something special should be alerted to the fact that the manor house once owned by Evelyn Waugh is for sale. Not sure what I would do with 12 bedrooms, but the place looks fabulous and I would love tending those gardens!

What Biden got right in his approach to climate change