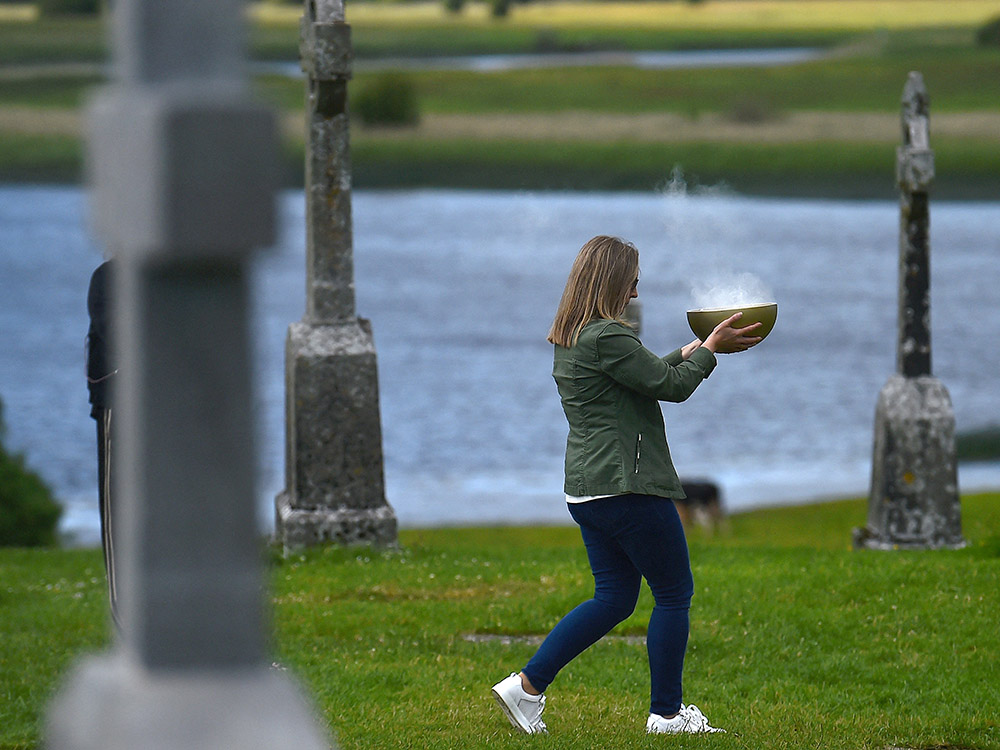 A delegate carries a bowl of incense during a prayer walk at a pre-synodal assembly in the sixth-century monastic site of Clonmacnoise in Ireland June 18. (CNS/Reuters/Clodagh Kilcoyne)

At the Go, Rebuild My House website produced by Sacred Heart University in Fairfield, Connecticut, Irish Jesuit theologian Fr. Gerry O'Hanlon reports on the National Pre-Synodal Assembly at which 160 representatives of various ecclesial organizations and reform groups met to assess the summary of the various synodal reports prepared by the relevant national committee of the Irish church. O'Hanlon acknowledges the skepticism that originally greeted the synodal process in some sectors of the church, and that everyone at the meeting acknowledged a lot of work remained to be done. Still, "it felt like — as Cardinal [Mario] Grech had told the Irish Bishops when they were launching the synodal pathway — that the hope that 'Jesus might visit us' had been realized."

In The Washington Post, Tim Busch, founder of the Napa Institute and bigtime donor to conservative Catholic causes, heaps praise on departing Catholic University of America President John Garvey. I disagree with the vision of the church Busch holds, and with the vision of Catholic University Garvey implemented, but what is most egregious about the article is that it completely ignores the vital role Garvey's predecessor, Bishop David O'Connell, played in both revitalizing the university and the surrounding neighborhood.

Jesse Wegman, writing in The New York Times, looks at how gerrymandering is subverting the way democracy is supposed to work. Yet, it is the kind of issue that is just abstract enough that it is unlikely to become the kind of thing that motivates voters, not when inflation is so high and special interest groups keep neuralgic issues front and center. Still, until we fix this structural problem in our democracy, it is difficult to see how anything else gets better. The photos by Damon Winter that accompany the piece are wonderful, too.

At Politico, Jack Shafer looks at some leading Democrats likely to get into the presidential race if Joe Biden doesn't seek reelection, and the art of getting into the race without appearing to get into it. Excellent analysis of what it means to be a "not running while really running" candidate. The three he names — Vice President Kamala Harris, California Gov. Gavin Newsom and Transportation Secretary Pete Buttigieg — could all win the nomination but I do not imagine any of them living in the White House.

At Foreign Affairs, Dan Altman, an assistant professor of political science at Georgia State University, argues that NATO should be doing more to help Ukraine. "NATO should pursue a strategy of going as far as possible in Ukraine without plainly crossing Russia's redlines — meaning refusing to openly attack Russian forces or send combat units into the country," he writes. "The United States prevailed in the gravest crises of the Cold War by using this approach." His suggestion that NATO train Western fighters who would volunteer to fight in Ukraine certainly pushes the envelope, but he is right that we need to enforce tougher sanctions and provide more and more weapons to the brave Ukrainian soldiers.

Relatedly, in The New York Times, Thomas Friedman predicts that the war in Ukraine is entering a very dangerous phase, in which Russian President Vladimir Putin thinks winter will be his ally and NATO seems unable to hurl his forces back or otherwise inflict a summertime defeat. What price — literally — will the West be willing to pay to defend democracy as it faces its most severe threat in recent decades?

Also in the Times, Maia Szalavitz examines the theory of codependency, which she labels a "toxic myth." I am not sure that I agree entirely with her analysis, but I do agree that there is no one theory of recovery from addiction that will fit all cases. That said, Szalavitz at times seems to disparage 12-step programs, which I have found perform miracles every day.

From the "Small State, Big History" site, an online review of Rhode Island history, an article marks the 250th anniversary of the seizing and torching of the Gaspee, a British schooner attempting to catch smugglers when it had run aground in the treacherous waters of Narragansett Bay. The episode took place almost three years before the "shot heard round the world" was fired at Lexington and Concord.

Editor's Note: This story has been updated to correct Pete Buttigieg's title. He is transportation secretary.