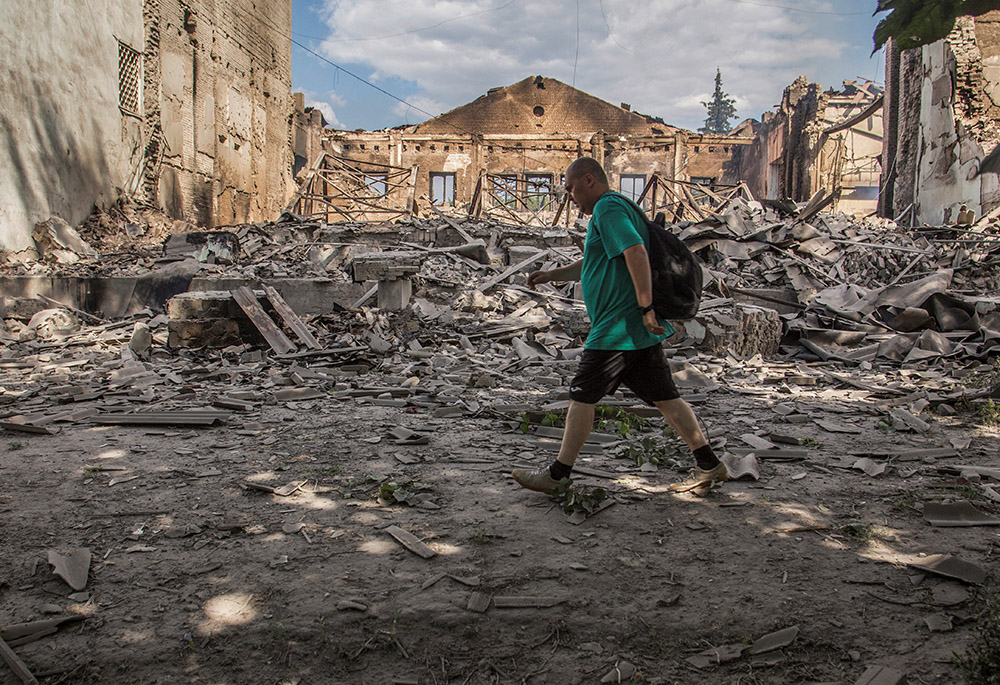 A local resident walks in a front of a building destroyed by a Russian military airstrike in a photo taken June 17 in Lysychansk, Ukraine. (CNS/Reuters/Oleksandr Ratushniak)

I hope everyone had a lovely July Fourth celebration. Growing up in New England, the holiday will always be associated with the Boston Pops Orchestra, under the baton of Arthur Fiedler, playing a concert on the Esplanade in Boston. They always played Tchaikovsky's "1812 Overture" which never made much sense, seeing as the music is organized around the French and Tsarist national anthems. But it is glorious music nonetheless. Here is a video of the concert from July 4, 1976, the bicentennial. There is a strange mix-up with the video in the middle, but the exuberance of the music comes through.

At Foreign Affairs, Ivo Daalder, who was ambassador to NATO during President Barack Obama's first term, and James Lindsay, from the Council on Foreign Relations, make the case that the response to the war in Ukraine is the "last best hope" for the Western powers to try and come together to create a rules-based international order. The authors rightly contend the Western nations must first learn why they failed to achieve this after the collapse of communism. They comment on the 1990s, "American hubris and European wishful thinking ruled the day, and leaders in Western capitals ignored signs that great-power competition was far from dead." A wise call for sobriety and hope.

From Unite Here, the labor union that represents many hotel workers, has posted a new website listing those hotels which they ask patrons to boycott because of bad labor policies, and those which they encourage patrons to book because their workforce is unionized. Here is something we can all do to demonstrate solidarity with workers: Only patronize hotels that respect their workers.

At The Hill, Catholic University politics professor John White examines some of the similarities between George Wallace and Donald Trump, but argues Trump and his followers are motivated by conspiratorial thinking in ways that would have made the segregationist Wallace blush.

The "Appreciate Opera" website ranks the top 10 opera houses in the world. I have only been to two of the houses listed but it would be a fun "bucket list" excursion to visit the others on the list. It is surprising that so few modern houses made the list: Copenhagen and Oslo both have modern houses that are quite beautiful.

At Architecture Daily, a look at some modernist Catholic churches from the mid-20th century, some of which are quite beautiful. I was surprised that the Cathedral of St. Mary did not make the list: I was disposed not to like it based on photos but found it beautiful in person and a wonderful place to worship. Of those featured in this article, the Easter Church in Oberwart, Austria, looks to be the most beautiful.