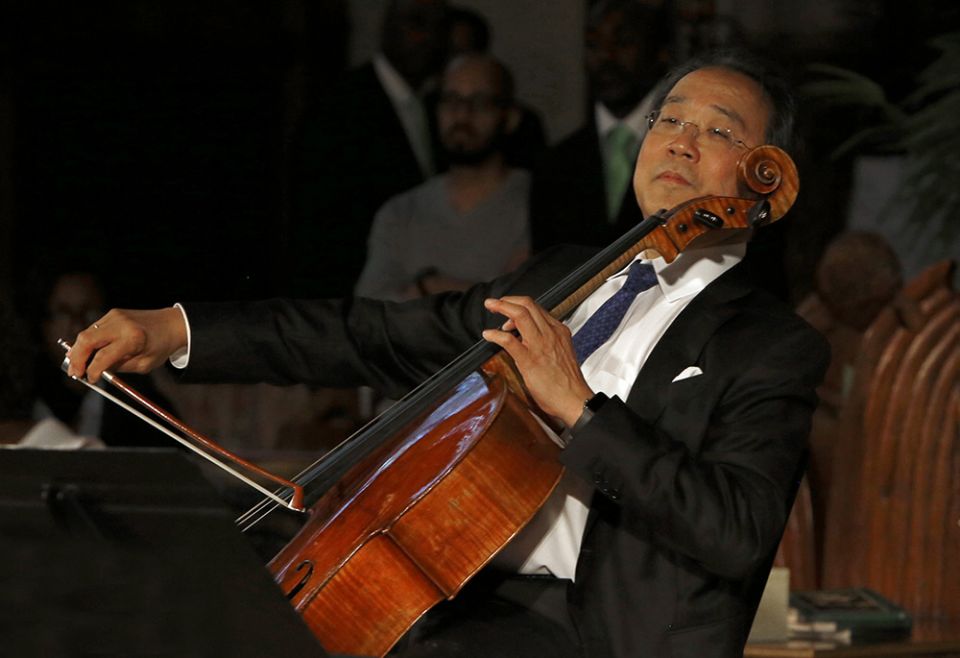 The great cellist of our time, Yo-Yo Ma, went to the Russian embassy this week, took out his cello and played the hauntingly beautiful Ukrainian national anthem. WUSA9 has a short clip of the performance, which is difficult to hear over the din of traffic on Wisconsin Avenue. I was delighted to see that the section of that busy road in front of the embassy has been renamed "Zelensky Way." Ma was in D.C. for a performance at the Kennedy Center with Emanuel Ax and Leonidas Kavakos where the trio began the concert with the Ukrainian anthem and NPR has posted a full recording of that tribute.

At CNN: Democrats won a rare victory at the U.S. Supreme Court when the high court declined to toss out redistricting maps that were being challenged by Republicans in Pennsylvania and North Carolina. The North Carolina case is especially significant because the plaintiffs asked the court to rule that state courts had no right to review presidential election laws because the Constitution vests the right to appoint electors in state legislatures. But don't pop the champagne corks too soon. It is not hard to conceive of situations in which the Supreme Court's silence about decisions taken by the states hurts Democrats — and perhaps hurts democracy.

Our friends at Millennial have a new episode of their podcast "Whole Life Rising" in which they interview Marcus Mescher, associate professor of Christian ethics at Xavier University in Cincinnati, Ohio. Mescher is one of the up-and-coming theologians who actually sounds like a theologian, someone who has taken the time to learn the tradition, not like an activist spewing platitudes and slogans.

In the Los Angeles Times, Cindy Carcamo looks at the role evangelical churches play in politicizing conservative Latinos. Sixteen percent of Latinos in the U.S. identify as evangelical, according to the Pew Research Center, and the percentage of Latinos who are Catholic has dropped to 47%. In the long term, this diversity within the Latino community will increase their influence in politics: If party leaders know they can't take Latinos' votes for granted, they will need to pay better attention to what Latino voters want. In the short term, this ideological diversity hugely complicates the Democrats' strategies about mobilizing Latino voters.

Three related articles on education: In The New York Times, Emma Camp, a senior at the University of Virginia, wrote about the pressures on college students to conform to approved ideological positions, in the classroom and in private conversations, which results in self-censorship or worse. Twitter exploded with attacks on the young woman, with people suggesting she was auditioning for a job on Fox News. It is true her article sounded formulaic, but no more so than the critics. Worse, the attacks conveniently ignore the questions that are more pressing than Camp's job prospects: Is what she wrote true? And even if it is true, why are not more professors standing up for liberal education and the free exchange of ideas?

Second, at the Chronicle of Higher Education, Oyin Adedoyin looks at several surveys of college students and what they indicate about the degree of self-censorship. The picture those surveys paint is more complicated than the portrait drawn by Camp, to be sure, but there is still enough smoke to be worried that campuses have become less liberal in recent years and that people are afraid to even raise the issue.

And, third, at the Kansas City Star, Melinda Henneberger explains that the threat to liberal education in the red states is bad or worse than the stifling of debate on college campuses. Henneberger also points to a motivation for the attacks on public education coming from certain conservatives: They have financial interests in private schools. These attacks by legislators pretending to be curriculum experts are horrifying and carry the force of law. And one thing everyone should be able to agree on? Henneberger continues to produce superb journalism.

At Literary Hub, author Lee Cole pens an obnoxious, condescending article describing the homogenization of rural life in America. There is something to what he says, but his opening metaphor, about getting off the exit of the interstate is telling: It is not clear he ever leaves his car to actually engage people and their lives and cultures. Yes, consumerism has wreaked havoc on the soul of America, though that started long before the advent of "Kmart Realism" in the 1980s. It was a hot topic among cultural critics in the 1950s, as detailed by George Marsden in his wonderful book The Twilight of the American Enlightenment, which I reviewed for the Los Angeles Review of Books. Just as importantly, could Cole muster no sympathy for the subjects of his diatribe? Is he aware of the devastating effects neoliberal economics have had on rural America?