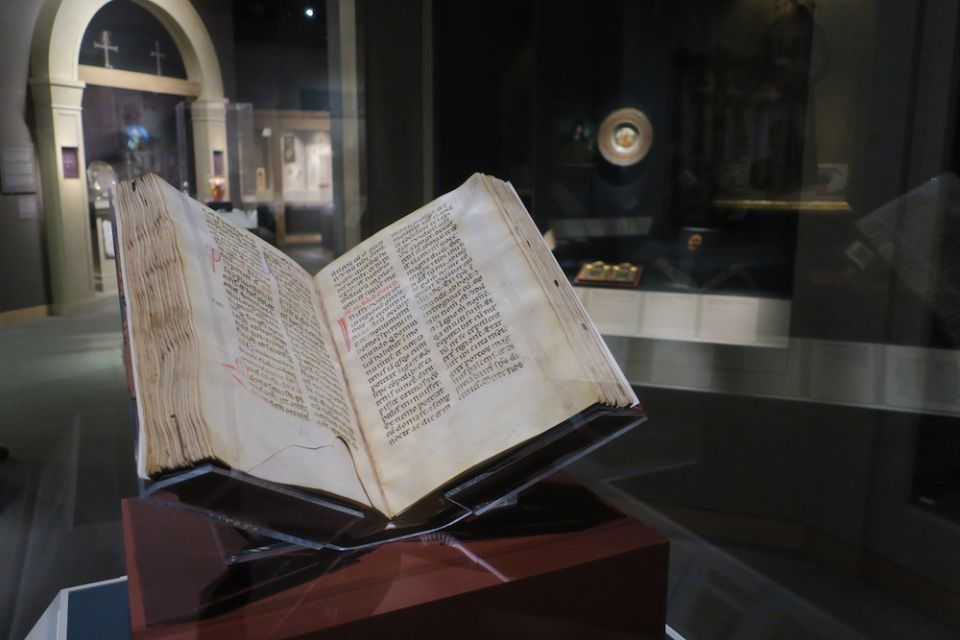 The so-called "St. Francis Missal," open to Mark 10:21, the passage that isn't in the original story about the saint, is on view at the Walters Art Museum in Baltimore. (Menachem Wecker)

Per the Legend of the Three Companions, the saint entered San Nicolo in Assisi and thrice opened a book at random in the sortes sanctorum technique. Each time, he read a verse urging relinquishing wealth. He and his colleagues then devoted themselves to monastic life, and the very manuscript on view at the Walters is a "relic of touch of St. Francis of Assisi," per a museum release. It adds that the object, part of "The St. Francis Missal" exhibition (open through May 31), is on view for the first time in 40 years.

Catholics and medieval art aficionados alike should try to see this fascinating show and the permanent collection at the Walters, which features one of the nation's best gatherings of medieval art. But the Walters has utterly shirked its fiduciary responsibility with this installation. It ought to correct this misstep immediately, or it will continue to mislead visitors.

In an age when museums are struggling to figure out how to reach more and younger visitors and to fund ambitious programs, it's understandable why they've beefed up marketing, expanded cafes and shops and increased flashy digital displays. But when that comes at the cost of honest, scholarly context, museums can no longer proudly cite research claiming they're better trusted than are newspapers and other information sources.

The museum may have correctly guessed that wider press coverage was to be had by misleading here, but even the Walters curator's explanation to a CBS anchor — that this is the first time the manuscript has been shown in a show devoted to it — is inadequate. If the Walters wanted to be forthcoming, it would correct its misleading release and seek corrections from the news outlets.

Sadly, that's just the tip of the iceberg here. When I covered the manuscript for Arlington Catholic Herald in 2006, I noted that the museum nobly contextualized its controversial religious pedigree. St. Francis was supposed to have consulted a Gospel book, not a missal, and the Walters missal contains just two of the three passages St. Francis was said to have read: Luke 9:3 and Matthew 16:24. Matthew 19:21 doesn't appear in the missal at all. The current exhibit offers not even a hint of skepticism.

In 2006, the Walters stated St. Francis "might have consulted this missal in 1208 at a pivotal moment in his life," and despite a marginal note placing the book in the Assisi church San Nicolo, "it is uncertain whether this is the same church that Francis visited." The missal, devoid of gold or expensive pigments, suggests a small provincial church. The Walters then called it "more problematic" that Matthew 19:21 is missing from the missal's Gospel readings. Mark 10:21 offers a "near-perfect parallel for the absent text from Matthew," it noted, adding that it's "remarkable" that the passages appear atop text columns, "where they might easily catch a reader's eye." Why prominent page location matters if a saint is deliberately seeking verses at random was left to the imagination. 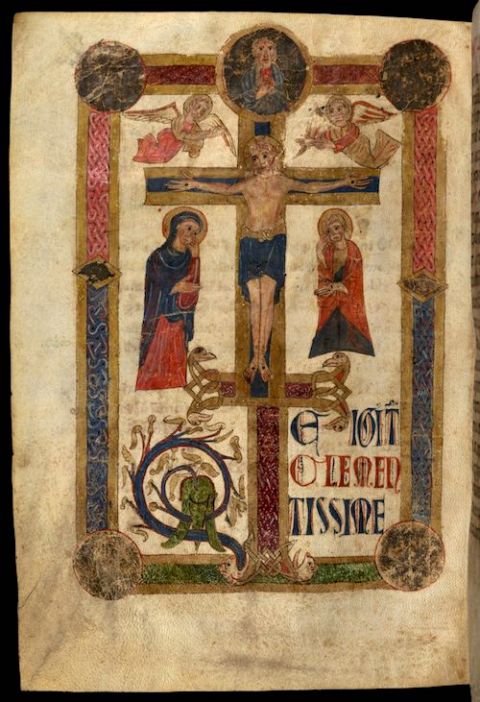 In an interview on WJZ-TV 13, anchor Marty Bass asks Lynley Herbert, the Walters' curator of rare books and manuscripts, what page the book is open to. "It's open to one of the three passages that he consulted that day," Herbert answered.

"This is believed to be the very book that Francis opened that day in 1208, over 800 years ago, and according to both the accounts and also inscriptions in the book, it looks like this actually is the book," she added. "It dates from the right time and from the right place."

Herbert didn't admit what the museum stated clearly 14 years ago — that the page to which the manuscript is actually open in the show (Mark 10:21) isn't mentioned in the story at all. That the manuscript is currently open to the problematic one just compounds the irony here; luckily the page will flip to one of the other two midway through the exhibition run.

Flanked by two dozen objects in the small exhibit, the missal has just come out of a two-year conservation process.

"This is the book that set St. Francis on the path to poverty," wrote Mary Carole McCauley in a recent Baltimore Sun feature. "It seems fitting that even after an ambitious and painstaking two-year restoration, the book that persuaded the man from Assisi to renounce earthly goods — and that resulted in the founding of the Franciscan order — appears as humble and unprepossessing as a monk's brown habit."

Herbert told the Sun, "The feeling has grown over the last century that this has to be the book," and that this manuscript was "an expensive object. The blue used in it is marine blue, and it was made from lapis that had to be imported from Afghanistan. During that period, lapis was more expensive than gold." That sounds quite different to the argument the Walters made in 2006, that the manuscript was plain in its materials. And if the Sun reporter looked through the paper's archives, she would have found an informative J. Wynn Rousuck article from 1982.

Rousuck notes the legend "in which the Walters missal may figure" and writes that "The Assisi Missal was probably rumored to be the one St. Francis used when Henry Walters bought it from a French dealer in 1913. … The purchase price is unknown, but a German dealer had advertised it the year before for 5,000 marks." The first documented claim that it is associated with the saint is from 1914. The object "fell into oblivion" until a French professor saw a microfilm version of it in 1977 and asked the archivist at the Assisi chancellery about it. The next year, a Vatican publication called it "an exceptional discovery, the Missal of St. Francis." (There are echoes here of the Turin shroud.)

"The Walters is not so sure what it has. The manuscript has been dated between 1173 and 1228 and ascribed to the diocese of Assisi," Rousuck wrote. "However, the gallery calls it 'the Assisi Missal,' not 'the St. Francis Missal.' "

She adds that the missing passage, Matthew 19:21, is "the only one consistently cited by all writers who have passed on the legend."* The museum's Renaissance curator at the time wrote, "The absence of the Matthew verse must be taken into account in any serious discussion of the possible role played by the Walters missal in the formation of St. Francis' rule."

Fr. John Geaney, then Baltimore Archdiocese communications director, told the Sun at the time that if the missal isn't the one that the saint handled, "whether it's authentic or not, it puts us in touch with a time that we could not be in touch with any other way." That point holds, but visitors are robbed of the chance to actually decide how they want to approach the work when they aren't even told there's room for healthy skepticism.

That's why this propagandist staging matters. Surely there are worse scholarly crimes than a museum stating something that had been on view at least four times in the last 40 years hadn't been shown since 1980 and trumpeting the significance of a manuscript with heavy clouds hanging over it. But in the era of deep-fake videos and news, it's disturbing that curators decided to sweep this theological quandary under the museum carpet.

It matters whether this was the manuscript that miraculously set St. Francis on his remarkable path or a regular old 13th-century manuscript. The latter, of course, is a treasure in its own right, but although there are plenty of very cool old baseball cards, there's a reason why a 1909-11 T206 Honus Wagner card recently sold for $1.2 million.

Viewers should decide for themselves the degree to which they want to look at this manuscript, and other religious objects like it, through a lens of belief, skepticism, or both. If one chooses to believe that St. Francis touched this particular book, that's a personal decision that the rest of us ought to respect, and perhaps even look up to. If someone elects, alternatively, to see the object as something that couldn't have "met" the saint, or even to view Francis as other than saintly to begin with, that's allowed, too.

But museums, if they want to remain relevant and authoritative, have to be honest to their audiences. Otherwise, viewers don't really have a reason to visit museums at all.

[Menachem Wecker is a freelance writer based in Washington, D.C.]

A version of this story appeared in the March 20-April 2, 2020 print issue under the headline: A story badly aged .