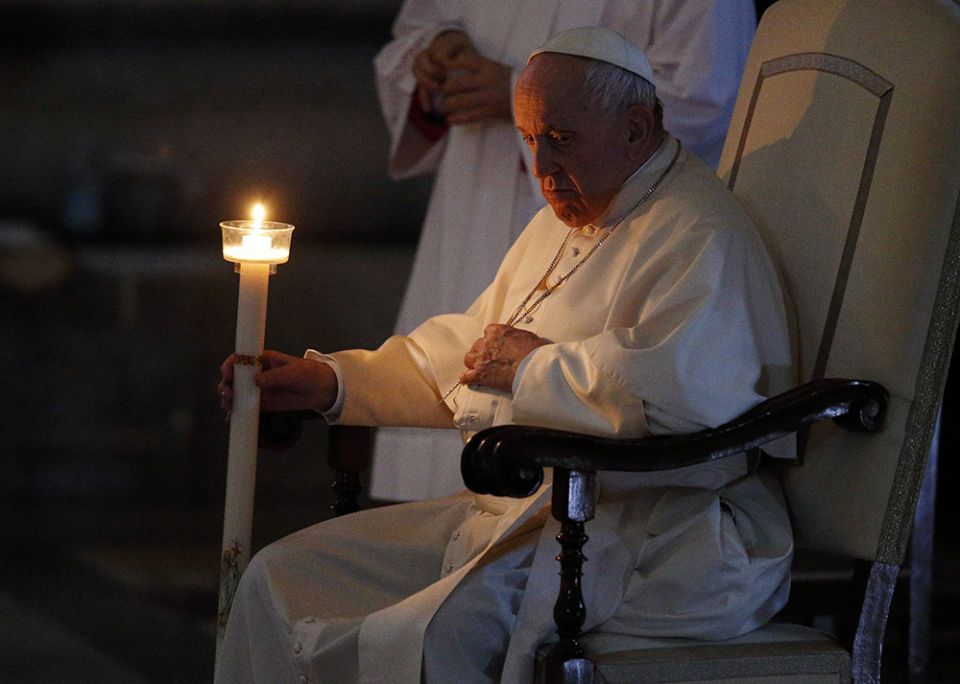 Pope Francis holds a candle as he attends the Easter Vigil celebrated by Cardinal Giovanni Battista Re in St. Peter's Basilica at the Vatican April 16. (CNS/Paul Haring)

Rome — The joy of Easter was already palpable a week prior in the Eternal City, when on Palm Sunday, some 65,000 people filled St. Peter's Square. The April 10 liturgy celebrating Christ's triumphal entry to Jerusalem also marked the first public Mass to take place in the square in three years due to the pandemic.

By Easter Sunday, that number swelled to 100,000, with the pope and pilgrims alike visibly delighting in the return of tradition. So, too, for this journalist covering his first Holy Week in Rome since becoming NCR's Vatican correspondent in September 2021.

Prior to Palm Sunday, one of the last major events to take place in the square was Pope Francis' extraordinary urbi et orbi ("to the city and the world") message on March 27, 2020. There, in one of the most iconic scenes of his papacy, Francis stood alone under dark skies and pouring rain and pleaded to God for an end to the global pandemic.

Popes usually give their urbi et orbi blessings only immediately after their election and on Christmas and Easter.

This year on Easter Sunday, two years after that stormy March evening, Francis soberly took stock at what has happened since then. Rather than emerging from the pandemic "hand in hand, pooling our strengths and resources," the world, he said, has chosen to embrace the spirit of Cain, "who saw Abel not as a brother, but as a rival, and thought about how to eliminate him."

Indeed, the shadow of the war against Ukraine loomed large over the Vatican's Holy Week festivities, in both deliberate and unintended ways. 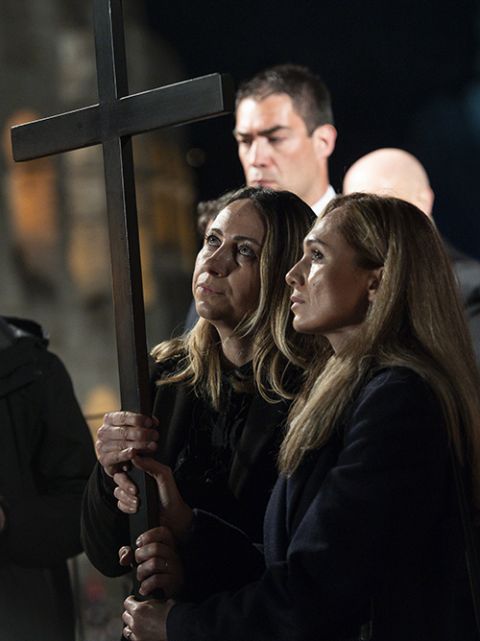 Ukrainian nurse Iryna and Russian nursing student Albina hold a cross at the 13th station as Pope Francis leads the Way of the Cross outside the Colosseum in Rome April 15. (CNS/Vatican Media)

Throughout the week, Francis intentionally drew comparisons between the suffering wrought by war and that of the passion of Christ. In a pointed homily on Palm Sunday, he said that "Christ is crucified yet another time" in the "folly of war." Francis made similar references throughout the triduum liturgies.

But if the Vatican sought to spotlight its concern over the war, it also managed to overshadow those efforts through a controversy that erupted at the start of Holy Week, when the Vatican announced that a Ukrainian and Russian would jointly carry the cross during the Way of the Cross at Rome's Colosseum on Good Friday.

There was immediate pushback, including from the head of the Ukrainian Greek Catholic Church and Ukraine's Vatican ambassador, saying the gesture failed to properly account for Russia's aggression against Ukraine.

In the end, a Ukrainian nurse, Iryna, and a Russian nursing student, Albina, who are friends, carried the cross for the 13th station, where Jesus dies on the cross, but the original meditation was scrapped.

"In the face of death, silence is more eloquent than words," read the revised meditation that evening. "Let us pause in prayerful silence and each person pray in their hearts for peace in the world."

While allies close to Francis sought to defend the Russian and Ukrainian appearing together as a sign of hope and reconciliation and a rejection of war, other observers saw it as further evidence of the limitations of the Holy See's diplomatic strategy on Russia and Ukraine.

Francis, too, had his own personal Via Crucis during this Holy Week, as the 85-year-old's health was the subject of much concern. Ever since Francis was forced to cancel a day trip to Florence, Italy, at the end of February due to severe knee pain, his limited mobility has continued to be evident in his public appearances.

On Palm Sunday, rather than participating in the dramatic procession around the obelisk in St. Peter's Square and up to the altar, the pope was simply driven up in a vehicle prior to the start of Mass. On Good Friday, the pope processed up the main aisle of St. Peter's Basilica, but did not lie prostrate in front of the cross, as is tradition during the service.

The following day, Francis chose not to preside over the Easter Vigil, but still delivered the homily and baptized seven people. On Easter Sunday, the pope appeared in good form as he made his way on the popemobile throughout a full St. Peter's Square, but was forced to sit down halfway through his remarks, evidently due to knee pain.

To be clear: This is a notably different scenario from Pope John Paul II's slow and steady health decline that began in the 1990s and continued to his death in 2005. Indeed, by 1995, the Polish pope had already undergone a number of operations, experienced two falls, and had to cut short his 1995 Christmas Day message due to a dizzy spell, saying "I cannot go on."

But Francis' very obvious difficulties in walking, especially when it comes to ascending or descending stairs, raise serious questions about how he will be able to undertake his likely travels in the next six months to Lebanon, the Democratic Republic of Congo, South Sudan, Canada and Kazakhstan.

While this is a pope that seems determined to "go on," there seems to be little doubt that his public ministry may look a bit differently or need to be modified going forward.

We journalists who cover the pope are fortunate to have a front row seat to it all: be it by being among the few people allowed inside Rome's Colosseum to have a bird's-eye view of the Via Crucis or atop Bernini's colonnade overlooking St. Peter's Square. From there, we follow his every word and every pained move.

After three long years since the last Easter service in the square, this year's public celebrations marking Christ's resurrection from the dead after three days took on special symbolism.

And while they offered much needed good news to both urbi et orbi, to the city and the world, during this "Easter of war," it also served as a reminder of the challenges of peace — and of those facing one of its main messengers.

A version of this story appeared in the April 29-May 12, 2022 print issue under the headline: A Holy Week diary from Rome .

Column | An 'Easter of war': A Holy Week diary from Rome