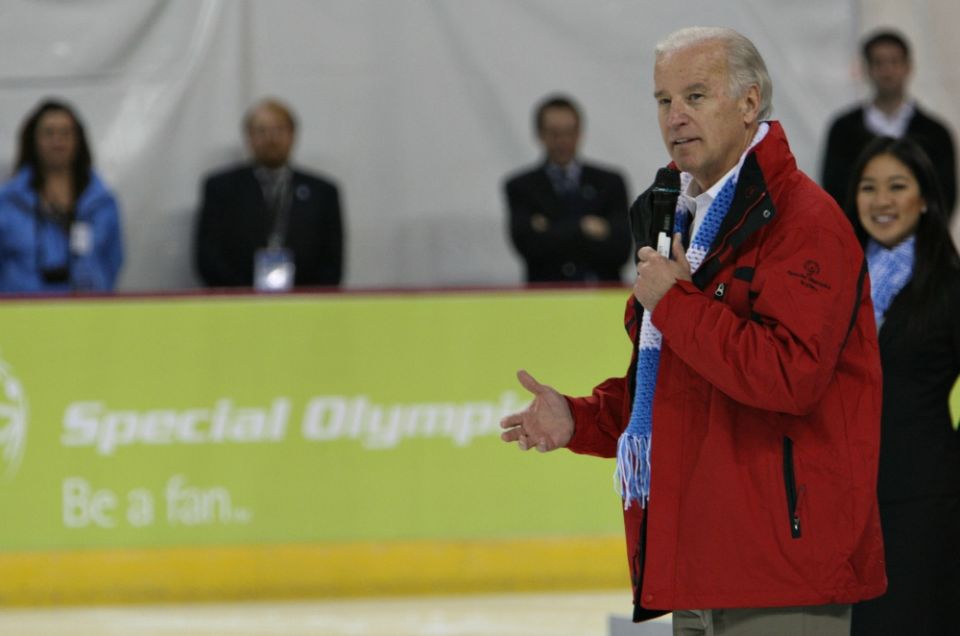 "Folks, the weather still isn't cooperating. It'll be another hour or so before we can take off," the pilot said.

We were on board Air Force 2, on our way to Boise, Idaho, for the 2009 Special Olympics World Winter Games. Joe Biden was vice president.

An aide approached and said, "Mr. Vice President, by the time we arrive, we'll have less than two hours on the ground. We can always go to another Special Olympics Games."

We all looked at Biden.

"I gave my word that I'm going. Let's wait to see if the weather breaks. And let's get some work done while we wait," Biden replied.

And wait we did. For another hour.

We eventually took off and made the cross-country flight. The 2,500 Special Olympics athletes from around the world were overjoyed to meet the vice president of the United States.

Just a few months later, my mother, Eunice Kennedy Shriver, the founder of Special Olympics, died. The small Catholic church filled with family, friends, local Special Olympics athletes and special education teachers. As my siblings and I processed toward the altar with our mother's casket, I looked up and saw Biden standing in the second row. He had slipped in through a side door.

After Mass, he gave my siblings and me a hug and told us he loved our mom. He spoke with each of us individually and then quietly departed through the side door, avoiding the crowd and media out front.

Eighteen months later, my father, Sargent Shriver, died. This time, we asked Biden to give a eulogy. In remembering my dad, Biden used one of my favorite quotes from Dr. Martin Luther King Jr.

Dr. King captured the essence of ... what I think your dad believed about our obligations to our fellow man, when Dr. King said, "Everybody can be great, because anybody can serve. You only need a heart full of grace and a soul generated by love."

King is not the first or only religious leader who joyfully challenged their followers to serve others, to pursue the common good.

Yes, one of the founding principles of our government is the separation of church and state, but we can still infuse spiritual values into our politics.

Abraham Lincoln knew this. In 1863, he wrote that our nation had "grown in numbers, wealth and power ... but we have forgotten God. It behooves us then ... to confess our national sins, and to pray for clemency and forgiveness."

Lincoln's challenge is as true today as it was in 1863. We need to recall the deep truths of our religious traditions — the need for love and grace; for clemency and forgiveness; for mercy and humility; for empathy in good times and in bad; for honesty; for keeping one's commitments; for decency.

As an 18-year-old undergraduate at the College of the Holy Cross, I first heard the words of the prophet Micah:

This is what Yahweh asks of you: only this — to act justly, to love tenderly and to walk humbly with your God.

I love the words "only this" — as if it were easy!

But it isn't easy, is it? Goodness is hard work.

A year ago, at a large political event, I quickly introduced Biden to my friends Alina and Bob and their adult son, Teddy, who has developmental disabilities. Biden focused on Teddy for five minutes; he didn't seem to notice the other people in the room clamoring for a handshake and a selfie.

At around 11 o'clock that night, Bob called me and said, "Vice President Biden just called Alina and me and congratulated us on Teddy. He told us how proud he was to meet us all."

His voice cracking, he asked, "Did you ask him to do that?"

Now more than ever, America needs a good and decent leader who cares for the least of our brothers and sisters, who cares for all of us — Republicans, Democrats, independents and everyone in between.

This is who Joe Biden is. He will lead us all as we journey, together, to restore the soul of our nation.

[Mark Kennedy Shriver is a child advocate and best-selling author of A Good Man: Rediscovering My Father, Sargent Shriver and Pilgrimage: My Search for the Real Pope Francis. He is one of 36 recently named Catholic co-chairs of the campaign's "Catholics for Biden" outreach.]

A version of this story appeared in the Oct 16-29, 2020 print issue under the headline: America needs a leader who cares for all of us .

Commentary | Now more than ever, America needs a leader who cares for all of us