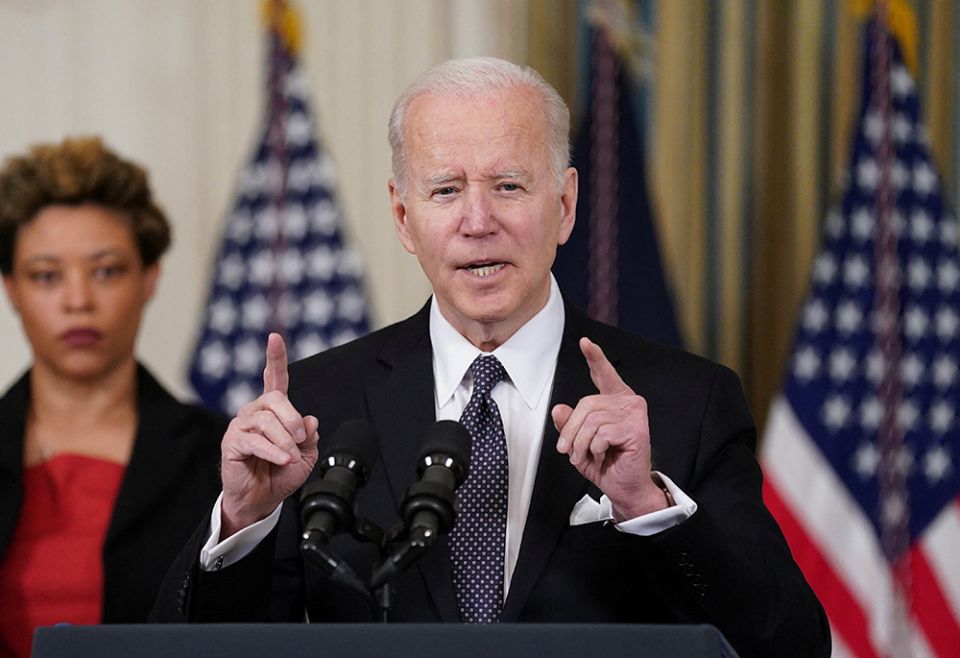 President Joe Biden unveiled his budget proposal this week and while such proposals always undergo a great deal of change before enactment, a budget is always as much a political and a moral document as it is a fiscal one. They reflect an administration's priorities and values as well as its own estimation of what political arguments will work best in the coming election. The political and moral are thoroughly intertwined. This budget is no exception.

The most important number that informed this budget is not a particular line item nor a total expenditure for domestic policies. The number that shaped this document is 52. Currently, the U.S. Senate is evenly divided between Democrats and Republicans, and the Democrats are able to push things through on party line votes with Vice President Kamala Harris breaking the tie.

Two Democratic senators, however, often break ranks with the president and their party: Arizona's Kyrsten Sinema and West Virginia's Joe Manchin. All through the winter, the Democrats tried to get the two senators to support the president's Build Back Better plan and they could not be moved. If the Democrats could pick up two more Senate seats, their agenda would not so easily be held hostage.

Budgets are also conceived with an eye to the next election and this budget shows the president is betting that the way to limit losses in November is by running to the perceived center. For example, the budget would reduce the federal deficit by $1 trillion over ten years. It also would scale back Biden's proposed spending on climate change from the $550 billion in the Build Back Better plan. The president also minimized his plans to tax the very wealthy, although there is still a wealth tax tucked into the budget proposal.

Fiscal prudence is not an issue that riles up the Democratic base. But it might appeal to the suburban voters, mostly women, who flipped key states like Pennsylvania in the last election, especially if former President Donald Trump is successful in unseating more moderate Republican candidates with MAGA true believers. Still, midterms are usually low-turnout affairs and that usually requires getting the base excited, so Biden is betting that politics has shifted so greatly, a more centrist approach might work.

I suspect this is not mere political calculation. The president campaigned on the promise he would unite the country and his inaugural address sounded the same theme. That hope saw a significant victory with the bipartisan infrastructure law and with the almost unanimous support for increased aid to Ukraine in the past few weeks. In almost all other regards, Biden's goal of dancing with the Republicans on behalf of the country has been met by a curt refusal from Senate Majority Leader Mitch McConnell, whose political interest and ideology both counsel against any effort to make government work except for the plutocratic class.

The president is hoping to rob Republicans of some of their strongest talking points. For example, the White House press "fact sheet" explained that "The Budget provides $3.2 billion in discretionary resources for State and local grants, and $30 billion in mandatory resources to support law enforcement, crime prevention, and community violence intervention, including putting more officers for community policing on the beat across the Nation." If Republicans accuse the Democrats of seeking to "defund the police," Democrats can counter that the Republicans, in voting against the budget, robbed local communities of all these billions of dollars intended to put more cops on the streets.

The budget also seeks $1.7 billion for tackling gun violence, a cause that is as just as any but which has repeatedly run up against GOP intransigence and Supreme Court decisions that create an idol of a tendentious reading of the Second Amendment. The money aims to help crack down on gun trafficking and tracing, among other important but peripheral programs.

Mary Novak, the executive director of Network Lobby for Catholic Social Justice, recognized that the budget was good but not great.

"We know that budgets are moral documents. NETWORK is pleased to see President Biden's commitment to advancing legislation that Builds Anew by increasing funding for safe, affordable housing; dedicating $10 billion over the next 10 years to protect secure and fair elections; reinvigorating federal civil rights enforcement and the prosecution of hate crimes; and requiring the ultra-wealthy to pay their fair share through the Billionaire Minimum Income Tax," Novak said in a press release. "We look forward to seeing the effects of reduced funding in immigration detention centers and increased investments in creating a clear pathway to citizenship."

Morally, who can argue. Politically, I suspect that as the nightly scenes of devastation in Ukraine persist, the increase in military spending will receive widespread support in Congress. What is more, there are key U.S. House swing districts like the one where I live, Connecticut's second district, where the incumbent Democrat, Rep. Joe Courtney, would have difficulty winning in November if the president shut down the manufacture of nuclear submarines at General Dynamics Electric Boat in Groton, a facility that serves as an economic engine for the southeast corner of the state.

Power is almost always corrupting of morals and great evils, both of indifference and of active injustice, have been justified in the name of retaining power. How many former Trump aides thought they were the ones who could "control" the narcissist-in-chief, failing to recognize how much they were compromising their own integrity. There is a reason the liberal intellectual tradition places such a high value on argument and evidence, as counterpoints to mere power, in deciding what is right and just to do. In normal times, criticizing a budget for political expediency is fair game to be sure.

These are not normal times. Until Trump is in jail or has fled the jurisdiction, he remains the greatest threat to the American experiment in self-government since the Civil War. Biden is justified in calculating the political consequences of his budget decisions in a way most of his predecessors were not. He does not get carte blanche. The hallmark of liberal democracy is criticism of the government, and the ability of the people to self-correct prior bad decisions. And, in this case, I think Biden may not have gotten the political calculations exactly right.

This is a good budget, not a great one. It is so far better than any budget any Republican could propose, I can mostly hold my nose about the things I do not like and keep arguing for more funding to combat climate change, higher taxes on the very rich, and other morally worthy public policies. But those arguments need always be prefaced by an explicit acknowledgment that the realistic political alternative at this point could spell the end of democracy as we know it.

How Biden deals with stuttering reveals his character