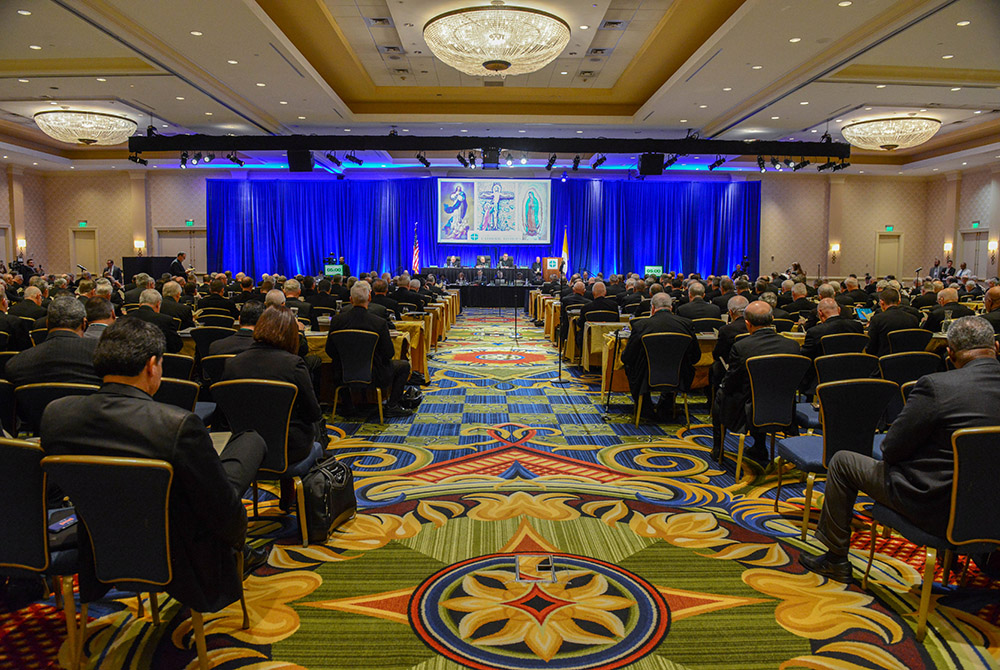 Today the meeting of the U.S. Conference of Catholic Bishops gets underway in Baltimore. Unlike previous years, they will not start their four-day assembly with an open session, but with executive session, behind closed doors. No doubt this reflects a desire to iron out their differences over the proposed document about the Eucharist before bringing the text to the floor for a vote.

NCR and Fordham's Center on Religion and Culture co-hosted a discussion of the proposed document last Thursday and I was surprised to hear Bishop John Stowe of Lexington, Kentucky, say he was "afraid" the document was likely to pass. I would have thought most of the non-culture war bishops like Stowe would vote for the theologically impoverished, but essentially anodyne, document if only to get the issue off the table.

The genesis of the proposed document was an effort to deny Communion to President Joe Biden. It grew out of a proposal from the working group Los Angeles Archbishop José Gomez, president of the bishops' conference, announced at the end of last year's meeting. But, after a clear intervention from the Holy See, the current text does not specifically mention politicians as a category of Catholics, and it also does not mention the president.

When the bishops bring the document to the floor for a vote, we can expect the culture warrior bishops to propose an amendment that does specifically target pro-choice politicians. As I have indicated before, that amendment will likely call for including a paragraph from the 2007 Aparecida document that seems to indicate politicians who diverge from the church's teaching should not present themselves for Communion. There might also be a proposal to include a reference to Canon 915, which the culture warriors interpret to require denying the Eucharist to pro-choice politicians.

So, before anyone gets upset if the final document passes, they should make sure to find out first what is in it, after any possible amendments during the meeting. If the goal was to deny Communion to Biden, and the document says nothing about that, that is a defeat for the culture warriors, not for the rest of us. If it contains some ambiguous language that might be stretched to suggest Biden be denied Communion, but the decision is left to his local pastor, Washington Cardinal Wilton Gregory, then we can live with that too because Gregory has indicated he has no intention of denying politicians Communion.

And, if the culture warriors succeed in adding an amendment that explicitly calls for pro-choice politicians to be denied Communion, then we can hope the document fails to garner the two-thirds majority it needs, or that Rome will intervene and refuse to give it the recognitio without which it also fails.

It is regrettable that the culture warriors, combined with a lack of leadership by Gomez, have allowed this whole nasty conversation to dominate the life of the church this past year. More than anything, let's hope we hear no more of it after this week.

Yesterday was the 25th anniversary of the death of Cardinal Joseph Bernardin. NCR published a moving and magnificent tribute to the late cardinal by his longtime friend and confidant Bishop Gerald Kicanas last Friday. As Kicanas shows, Bernardin's presence is still missed. When he was the leading voice at the U.S. bishops' conference, the bishops came together to pass substantive teaching documents on nuclear weapons and the economy. The bishops' conference was a moral force on Capitol Hill in large part because it made sure to avoid getting in bed with either party. Bishops disagreed about many things, but they liked each other, and with Bernardin's knack for finding common ground, the conference forged consensus time and again, on a variety of issues.

Now, the bishops' conference is like a ghost of its former self. In 2012, they failed to pass a document on poverty. In 2018, the Vatican had to intervene at the last minute and ban voting on a series of action items related to clergy sex abuse, a public rebuke of the conference leadership without precedent. This week, if they vote to approve this document on the Eucharist it will not be because the text is good but because its mediocrity does not offend. How sad.

This will be the first in-person meeting the bishops have had since before the pandemic. It's been two years. Let's hope that for the good of the church, their reunion fills them with a desire for that affective collegiality, with each other and with the pope, without which the conference can never achieve the kind of moral leadership it achieved during Bernardin's day. Let's hope.

This story appears in the USCCB Fall Assembly 2021 and Bishops, Biden and Communion feature series.