Fourth Sunday of Easter: Mirroring those we love 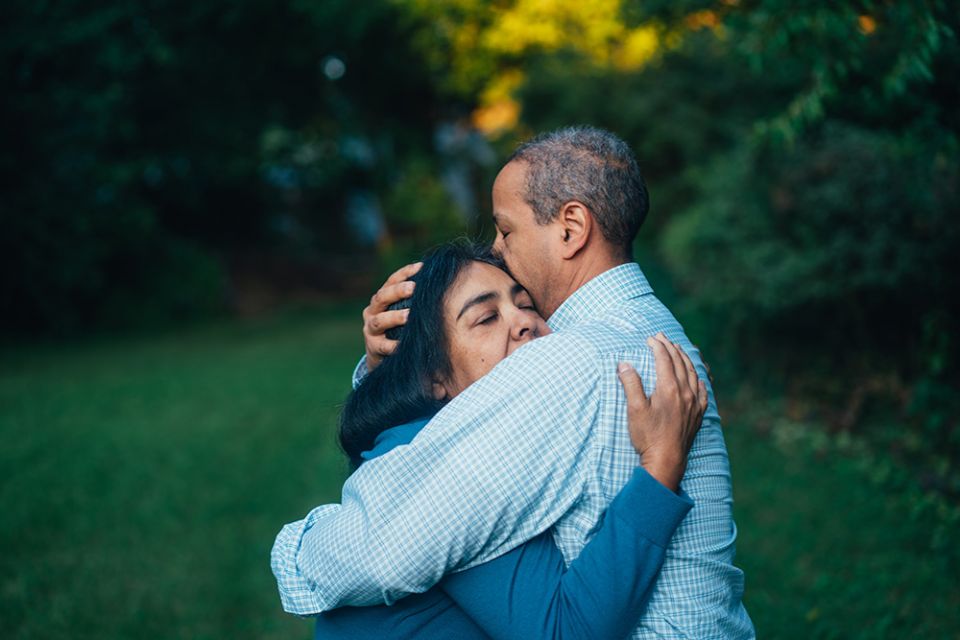 Did you ever notice that long-married couples sometimes seem to begin to look alike? It's probably not so much that they physically resemble each other, but over a lifetime they have picked up something of the other's gestures or tilt of the head. Often, they tend to mirror their way of gazing at each other.

We naturally imitate some characteristics of those we love. At the same time, we discover that each intimate relationship simultaneously makes us more deeply and uniquely who we are. These things are part of the mystery of love described differently in two of today's readings.

The seemingly simpler of our two readings is Jesus' self-description as the Good Shepherd. The Good Shepherd image communicates the origin and destiny of Jesus' relationship with us. As Good Shepherd, Jesus says that he lays down his life for his sheep. While that refers most obviously to the cross, in a broader sense, it describes God's relationship with humanity from the beginning of God's self-giving in creation through its fulfillment at the end of time.

In the life of Jesus, it began with "The Word became flesh and dwelt among us." It came to symbolic fulfillment when "he took a towel and tied it around his waist, then he poured water into a basin and began to wash the disciples' feet." Our Good Shepherd is the image of the God who created out of love.

Jesus carries the Creator image a quantum leap further when he adds, "I know mine and mine know me, just as the Father knows me and I know the Father." With that statement, he declares that we are not simply called to be a people of God, but to participate in his own union with his Father.

Pope Francis has talked about how a good shepherd smells like the sheep: That's the Incarnation. Jesus goes on to say that the sheep will smell like the shepherd — and that's what the Eastern tradition calls divinization. We grow in our resemblance of God.

This is where our selection from 1 John offers to stretch our imaginations. Today's first line could serve as our response to everything we hear Jesus say about the Good Shepherd: "See what love the Father has bestowed on us!" Then this passage goes on to tell us that we've not seen anything yet.

John invites us to contemplate our potential for infinite growth in God. John's words are purposely mysterious, saying that what we are becoming has not yet been revealed. The Jesuit mystic Teilhard de Chardin described this mystery when he encouraged a friend to trust in the slow work of God, "because only God could say what this new spirit gradually forming within you will be."

John says, "What we shall be has not been revealed," but "when it is revealed, we shall be like him, because we shall see him as he is."

Isn't that the same thing we see in people who have carried on a long love affair? The more we truly see and contemplate one another with love, the more our lives become intertwined. Be we friends or spouses, spending time together and repeatedly choosing to love one another molds us together such that we become who we never could have become without one another.

The combination of Jesus' description of what can happen because he is our Good Shepherd and John's promise that "we shall be like him for we shall see him as he is," may sound pretty esoteric. But we need to remember that the Word became flesh; God decided to smell like us so that we could take on the characteristics of the divine image in which we were created. We move more deeply into what has not yet been revealed through every relationship that draws us more deeply into love.

Friends pick up one another's gestures, and couples who have loved long do begin to resemble one another. That's because they have given one another what is most precious; they have spent their time on and with one another. In doing so, they have become more whole.

Today, Christ comes to us in the image of the Good Shepherd. It's important to note that everything he says about being our shepherd is addressed to us in the plural. He doesn't invite us to be his exclusive lamb, but the sheep of his flock.

Jesus introduces us to God as Trinity, God who is a community in ever growing relationship. Jesus invites us to be his communal sheep, smelling like one another, growing in him, giving our lives to and for one another. Doing that, we become ever more related and thus ever more like the God in whose image we were fashioned.

This story appeared in the April 16-29, 2021 print issue under the headline: Mirroring those we love .

Column | Fourth Sunday of Easter: Mirroring those we love