by Thomas Reese, Religion News Service
Opinion
This article appears in the Synod on the Youth 2018 feature series. View the full series. 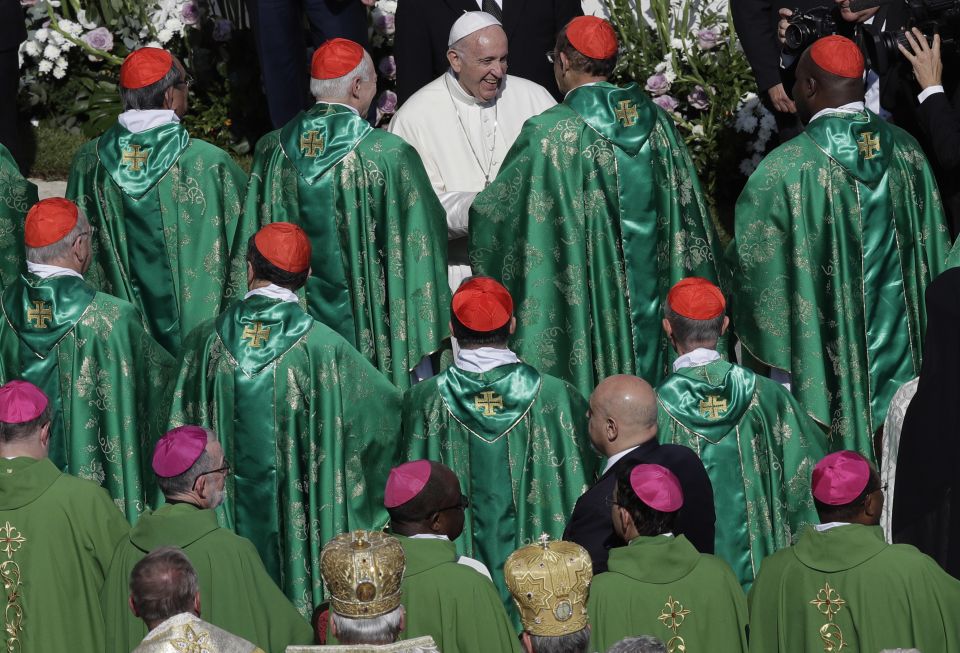 Pope Francis, top, greets cardinals at the end of the opening Mass for the Synod of Bishops on Young People, in St. Peter's Square at the Vatican, on Oct. 3, 2018. The synod is bringing together 266 bishops from five continents for talks on helping young people feel called to the church at a time when church marriages and religious vocations are plummeting in much of the West. (AP/Alessandra Tarantino)

Pope Francis urged bishops to reject conformism and frames of mind that "paralyze, separate and alienate us from young people," leaving them "orphans without a faith community to sustain them."

The pope's words came during his 11-minute homily at the opening Mass for the Synod of Bishops on Young People, which took place before a large crowd in St. Peter's Square Oct. 3, a beautiful autumn morning in Rome. Attending the synod are bishops from all over the world as well as lay auditors and representatives from other religions.

According to the Pew Research Center, 23 percent of the U.S. population do not identify with any religion — and are, in effect, "orphans without a faith community."

Rather than preaching on what young people need to do to conform to the church, Francis focused on how the church needs to listen to the young and respond to their spiritual needs.

The pope prayed that the synodal fathers might be anointed by the Spirit with the gift of dreaming and hoping so that they can reject conformism, which says, "It's always been done like this."

"Our young people will be capable of prophesy and vision to the extent that we, who are already adult or elderly, can dream and thus be infectious in sharing those dreams and hope that we carry in our hearts," he said.

Only if the members of the synod dream and hope, he added, will they be able "to anoint our young people with the gift of prophecy and vision."

What the church passes on to the next generation must be "diligent, living and effective" lest it "be extinguished or crushed by the prophets of doom and misfortune, by our own shortcomings, mistakes and sins," said the pope.

The sins and shortcomings of the Catholic hierarchy have been on display during the clerical sex abuse crisis, which the pope did not directly mention.

Young people, according to Francis, are calling "us to join them in facing the present with greater commitment and to work against whatever prevents their lives from growing in a dignified way."

Listening is a key part of the synodal process, according to Francis.

"Listening to God, so that with him we can listen to the cry of the people," he said. "Listening to our people, so that we can breathe in with them the desire to which God calls us." This will protect the synod and the church from "falling into moralistic or elitist postures" and "the lure of abstract ideologies that never touch the realities of our people."

In his homily he singled out the two bishops from China — Joseph Guo Jincai of Chengde and John Baptist Yang Xiao-ting of Yan'an — whom the Chinese government allowed to attend because of the new Vatican agreement with China. Although there have been 15 general synods since the first one called by Pope Paul VI in 1967, this is the first synod bishops from China have been permitted to attend.

The synod, which will continue through Oct. 28, will hold two sessions a day in the Paul VI synodal hall, one in the morning beginning at 9 local time and an evening session beginning at 4:30. The 266 voting members (mostly bishops) will be joined by 72 lay auditors and eight delegates from other Christian denominations. The sessions are closed to the public and the media.

[Jesuit Fr. Thomas Reese is a columnist for Religion News Service and author of Inside the Vatican: The Politics and Organization of the Catholic Church.

Francis' synod process is messy and fraught with fights, but it's necessary