Trump vs. the politics that Christianity requires 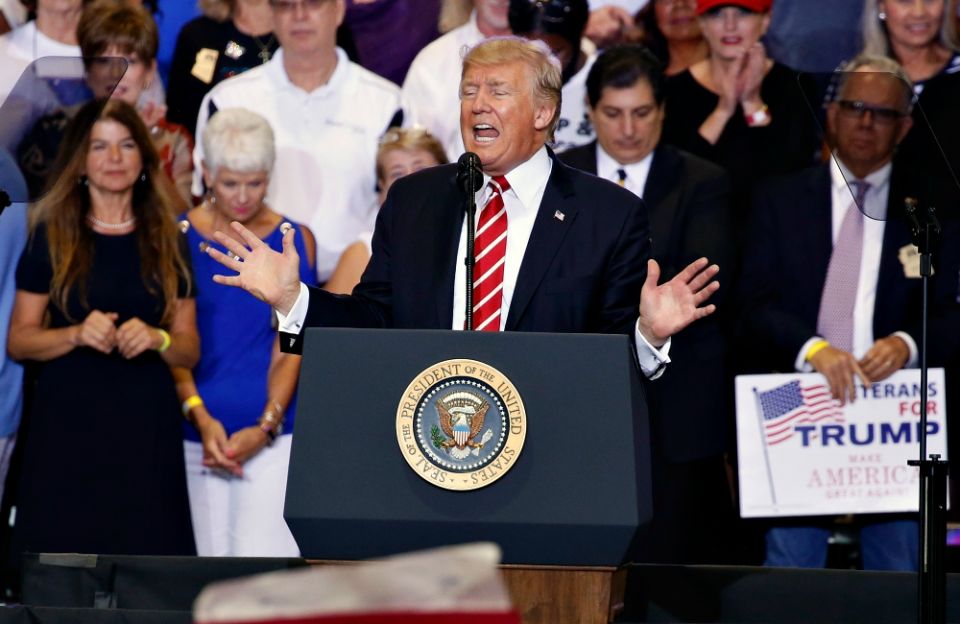 In the Second Vatican Council's Pastoral Constitution on the Church in the Modern World, Gaudium et Spes, the council fathers begin the section on the community of mankind with these words:

One of the salient features of the modern world is the growing interdependence of men one on the other, a development promoted chiefly by modern technical advances. Nevertheless brotherly dialogue among men does not reach its perfection on the level of technical progress, but on the deeper level of interpersonal relationships. These demand a mutual respect for the full spiritual dignity of the person. Christian revelation contributes greatly to the promotion of this communion between persons, and at the same time leads us to a deeper understanding of the laws of social life which the Creator has written into man's moral and spiritual nature. 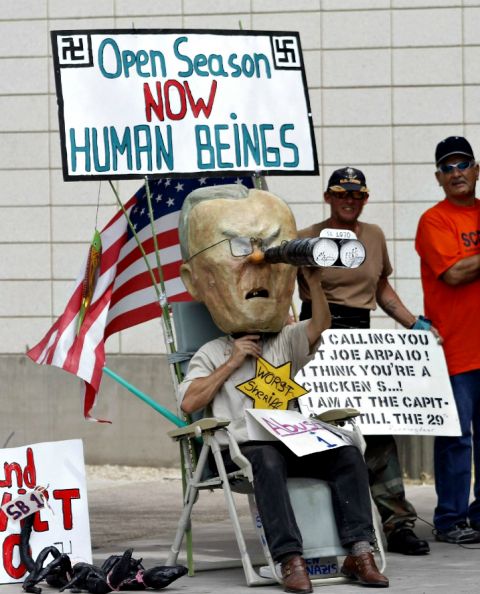 A man wears a mask of Joe Arpaio, then-sheriff of Maricopa County, during a protest against S.B. 1070, Arizona's immigration law, outside the U.S. District Court in Phoenix in 2010. (CNS/Reuters/Joshua Lott)

This was not the approach to communal life on display last Tuesday night when President Donald Trump held his campaign rally in Phoenix. The president does not aspire to a "communion of persons" but, instead, when he spoke about immigrants, he chose not to mention the plight of immigrants, the families torn apart, the exploitation they face.

Instead, he gave a shout-out to convicted former sheriff Joe Arpaio, who terrified Latino families in his jurisdiction with his aggressive anti-immigrant policies, and the president mentioned only criminal immigrants: "But Sheriff Joe can feel good. The people of Arizona know the deadly and heartbreaking consequences of illegal immigration, the lost lives, the drugs, the gangs, the cartels, the crisis of smuggling and trafficking. MS-13 — we're throwing them out so fast, they never got thrown out of anything like this."

I am glad that we are deporting members of criminal gangs, but they are a fraction of 1 percent of all immigrants.

In the section on political life in Gaudium et Spes, the council fathers state:

There is no better way to establish political life on a truly human basis than by fostering an inward sense of justice and kindliness, and of service to the common good, and by strengthening basic convictions as to the true nature of the political community and the aim, right exercise, and sphere of action of public authority.

Kindliness is not a word we associate with our president, certainly not when he is in full, unhinged rant mode. But, in Catholic social doctrine, the promotion of the common good is the principal end of government. Not for Trump. It is always us against them, all the time. He attacks the press. He attacks immigrants. He attacks Republican senators. Call me crazy, but I had never thought I would hear any president, let alone a Republican president, shower more praise on Kim Jong Un than on John McCain in the same speech.

Gaudium et Spes calls for international solidarity, and both Pope Emeritus Benedict XVI and Pope Francis have placed international cooperation to protect the environment at the center of Catholic social doctrine. But Trump said, "We are unleashing American energy, and I withdrew the United States from the job-killing Paris Climate Accord. [APPLAUSE] People have no idea how bad that was for this country. Great for other countries. We were like the lap dog. Great for other countries. Our country was so behind." 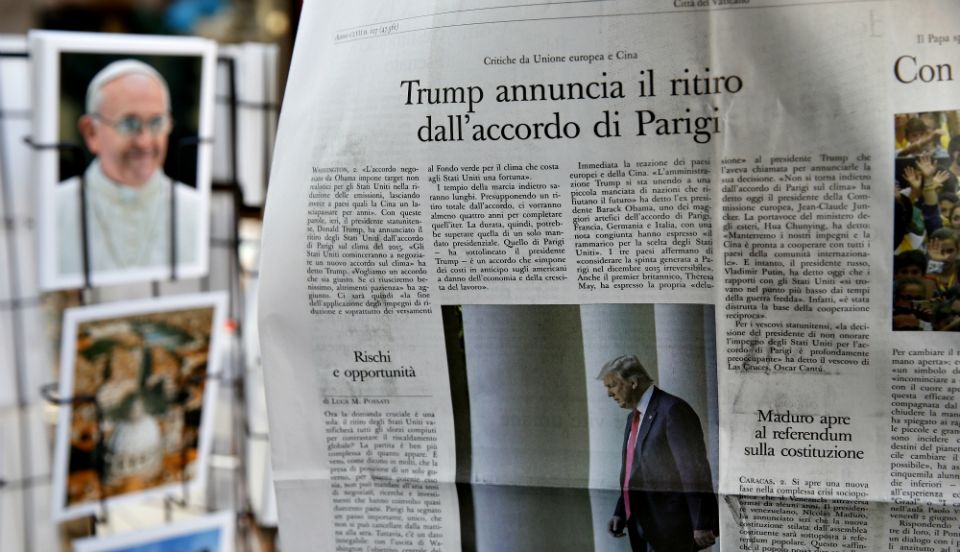 "Trump announces withdrawal from the Paris accord," says the headline in the Vatican's L'Osservatore Romano newspaper, released the evening of June 2. (CNS/Paul Haring)

Of course, the Paris Agreement called on nations to set their own goals, so it is hard to see how such an agreement turned us into a lap dog. But the loss of American leadership is a huge blow to the necessary international solidarity needed to confront the reality of climate change.

And, of course, Catholic theology and the Scriptures insist that veracity should characterize both private and public life. Lying is an intrinsic evil, after all. The president's speech was filled with what can charitably called misstatements. My personal favorite, which also caught the eye of our friends at ThinkProgress, was the president's apparent belief that you somehow scrub the coal clean after mining it. That might not qualify as a lie, as he might actually believe it, but that is not comforting.

Catholics in the U.S. belong to one party or the other based on which issues they think are more important. What is different about Trump is that it is the entire approach to politics that the church's teaching calls for that is at odds with the president's approach. The differences are foundational.

That fact does not keep some conservative Catholics, and many evangelicals, from seeking to give cover to this monstrous presidency. At the speech in Phoenix, the Rev. Franklin Graham was on stage, right behind the podium and Trump acknowledged his presence in his opening remarks. In an interview on "The Jim Bakker Show," Pastor Paula White insisted that Trump had been "raised up by God" for the tasks ahead.

Carson Holloway, at First Things, recently commended the president for the kind of political realism we associate with Machiavelli. I confess that when I read this sentence — "None of this suggests that Christians are required to support Trump's benign Machiavellianism (assuming that's the best way to understand his approach)" — I was relieved to know that the editors at the country's self-asserted "most influential journal of religion in public life" did not think we were all required to support Trump.

As I noted in my links column yesterday, this kind of evidence only supports the theory set forth in Jesuit Fr. Antonio Spadaro and the Rev. Marcelo Figueroa's controversial article in Civiltà Cattolica that conservative Catholics and evangelicals are willing to bastardize their theology to support certain political figures and ideas.

As long as Graham wants to appear with the president, and not at a White House event but at a campaign rally, I think those of us on the Christian left need to become yet more vocal about the ways this president offends against not only particular policies that strike us as moral, but against the kind of politics Christianity requires, a politics of respect for human dignity and pursuit of the common good. As long as First Things is making excuses for Trump, the Catholic left needs to be smart and loud in our insistence that performances like the one in Phoenix are inexcusable.

Trump is a different kind of threat to Christian and Catholic values, as even people with whom I often disagree, people like George Weigel and Robert George, realize. There is a moral obligation to resist him, tooth and nail, day in and day out, with all the moral fiber and intellectual rigor we can muster.

Column | Trump vs. the politics that Christianity requires

Pope Francis, in Earth Day messages, warns 'we are at the edge' on climate change