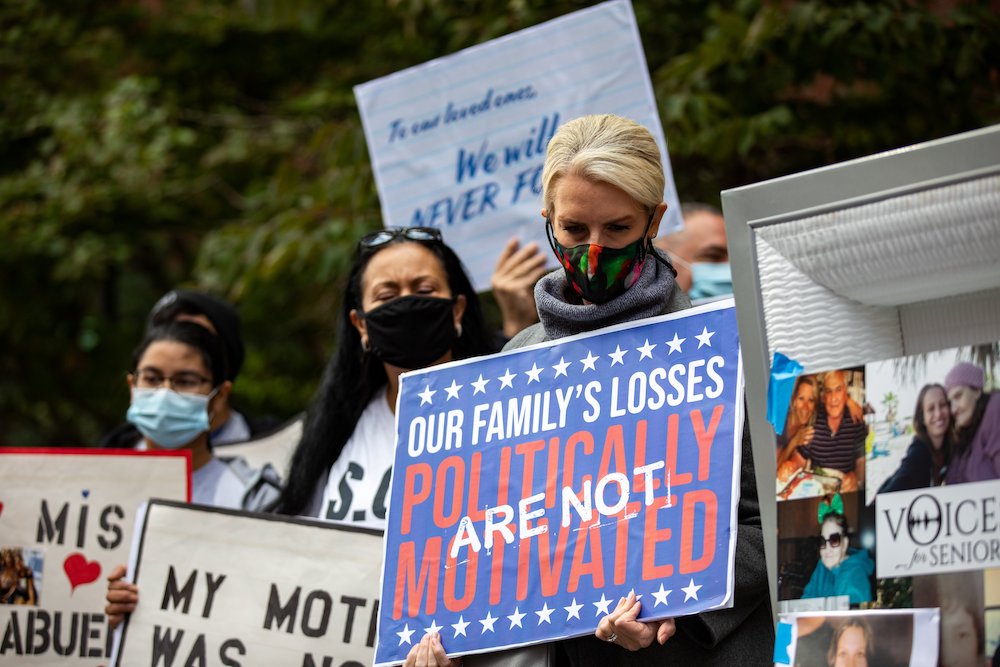 Grieving family members hold a mock funeral in the Brooklyn borough of New York City Oct. 18 to protest Gov. Andrew Cuomo's coronavirus restrictions that they say led to the deaths of their loved ones in nursing homes. In early October, Cuomo ordered more restrictions in certain Brooklyn ZIP codes he labeled "hot zones" because of a spike in COVID-19 cases. (CNS/Reuters/Jeenah Moon)

Wisdom is what has been tried and tested through time. It is life evaluated in the kiln of experience and so has been found true, over and over again. As in, "haste makes waste" or "let sleeping dogs lie." But stories, with more finesse, more depth than a proverb can provide in a sentence, the stories we pass along across generations, test our own spiritual values and ideals.

The monastic tradition is a veritable treasure house of stories, of wisdom literature.

In this what, I hope, is the post-insanity age of politics in the United States, I thought it might be refreshing to see what the desert monastics might be able to teach us, too, about how to live wisely in the face of such confusion.

Desert monastics in Egypt lived alone as hermits, but many of them lived in "neighborhoods" of huts and caves like small villages. As they committed themselves to lives of contemplation, simplicity and spiritual practices, they also saw life up close and personal. They lived alongside other monastics, and thousands of people came out to the desert for spiritual direction from them. Out of that reflection and experience came a collection of spiritual stories and a new kind of spiritual direction.

Monastic elders in Christianity, like the Zen masters in Buddhism, gave vignettes to novices and lay seekers to apply to their own fledgling spiritual lives. They are, I think, as meaningful to us in our attempts to live well now as they were to these villages of monastics centuries ago.

One of my favorite desert stories, for instance, is this one:

Once the rule was made in Scetis [one of these monastic outposts in Egypt] that the monks there should fast for the entire week before Easter. During this week, however, some brothers came from Egypt to see Abba Moses [who was renowned for his wisdom] and he made a modest meal for them. Seeing the smoke, the neighbors said to the priests of the church of that place: "Look, Moses has broken the rule and is cooking food at his place." Then the priests said: "When he comes out, we will talk to him." When the Sabbath came, the priests, who knew Abba Moses' great way of life, said to him in public: "Oh, Abba Moses, you did break the commandment made by people, but you have firmly kept the commandment of God."

The conundrum is this: Where is wisdom here?

Here in one little pod of people rests the soul of the human race. There are rule makers, rule seekers, rule breakers, judges and priests in every group of human beings everywhere. Just as they were in Scetis. The real moral question is which one of them is really right: the monastics who wrote a rule about fasting; the monk who broke the rule; the judges who criticized the fact that one man had abandoned the rule; the travelers who ignored the rule; or the priests who saw it all happen and did nothing.

Each of them has a case to consider.

Without the rule makers, we can't possibly have the "law and order" we say we want. These people decide what's important for the common good and try to spread that responsibility around. Notice that in the midst of this pandemic the medical community tried to protect the common good for us by prescribing masking, social distancing and the size of group gatherings.

Even some state governors ignored the proscription on the grounds that their states had been founded on a kind of laissez faire "freedom" and so citizens could not be required to protect themselves — or anyone else either. Individuals everywhere argued that they, too, were "free" and above having to meet any public safety orders. Some states simply preferred to live it out, like the common cold, except that thousands of them didn't make it.

The president of the United States, sworn to protect the country, not only derided masks but ignored the very thought of common good by his own political rallies. He disregarded the need for national leadership, let alone the thought of citizens' obligations to one another. So, in the end, we didn't miss "law and order." We abandoned it consciously. Smugly.

What that kind of morality does to our lives now — and in the future — will have consequences that false freedom cannot cure. Or to put it differently: Just think about the resistance to masking. Notice any effects of that?

Without the rule seekers — the people who value the guidance and organization that rules bring to a community — we would live in dangerous disorder: No red lights, no stop signs, no baby seats for cars, no compulsory education, no fishing licenses, no fair share of community taxes for community needs like roads and schools and hospitals. It will change society mightily. If it produces any society at all.

The problem here is that the rules can get to be more important than the ruled. 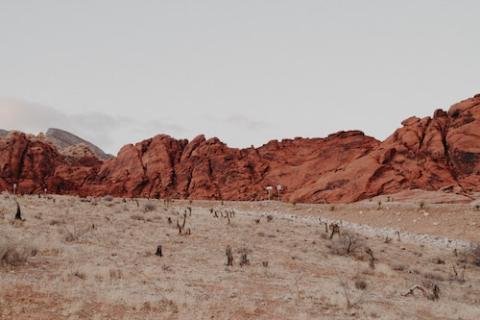 Monastic elders in Christianity, like the Zen masters in Buddhism, gave vignettes to novices and lay seekers to apply to their own fledgling spiritual lives. (Unsplash/Neonbrand)

Which brings us to the rule breakers. Every smart politician knows that a rule imposed, outside of emergency situations, without testing its degree of public acceptance will eventually be ignored. It can also become an invitation to revolt. Only narcissistic authoritarians attempt to lead by force. Everybody else knows that it will only be a matter of time before "rules proclaimed for rules' sake" either fall into disuse or, just as likely, are overthrown.

The classic example of laws making themselves is one that dictated that college landscapers were to lay cement pathways from one doorway to another between the university's new dormitories to preserve the well-manicured lawns around them. By the end of every summer, the area's straight cement walkways lay still untouched. Instead, it was the diagonal grass paths worn down to sod by the footsteps of the students themselves that were being used. After that, college landscapers waited for the students to decide which way they were going to walk from one building to another, then they poured the cement.

Which brings us to judges who criticize public development without taking circumstances into consideration. We have to know if the rule being broken is truly life-giving or simply makes a higher law of life impossible to obey.

And here, of course, is where Abba Moses shows all of us that no rule is moral that makes real morality impossible. To leave his guests unfed because some people thought that fasting would be a good way to prove their sanctity was a most unsanctimonious choice.

The philosophical question then is which of these positions is most live-giving at this time: Rule making or rule breaking? Each of these has its place. The moral response requires that we decide which is most life-giving at any given time.

From where I stand, Abba Moses knew what the Congress of this time too often fails to realize. It is not the budgetary rule keeping which is determining our stimulus package that will measure our sanctity. Wisdom demands, in fact, that the civic order break the budgetary rules which are enabling some to wallow in their "freedom" while others are starved by freedoms that are death-dealing.

In this case, the priest, the keeper of the moral order rather than the institutional system, knows that the heart of God trembles over rules made to keep some of us secure while the rest of us — the ones whose resources have run out — lie face down in the dust of what was once their jobs, their houses, their food, their families and their lives.

Come, oh wisdom, and give us light.

A version of this story appeared in the Jan 8-21, 2021 print issue under the headline: Rule making or rule breaking.