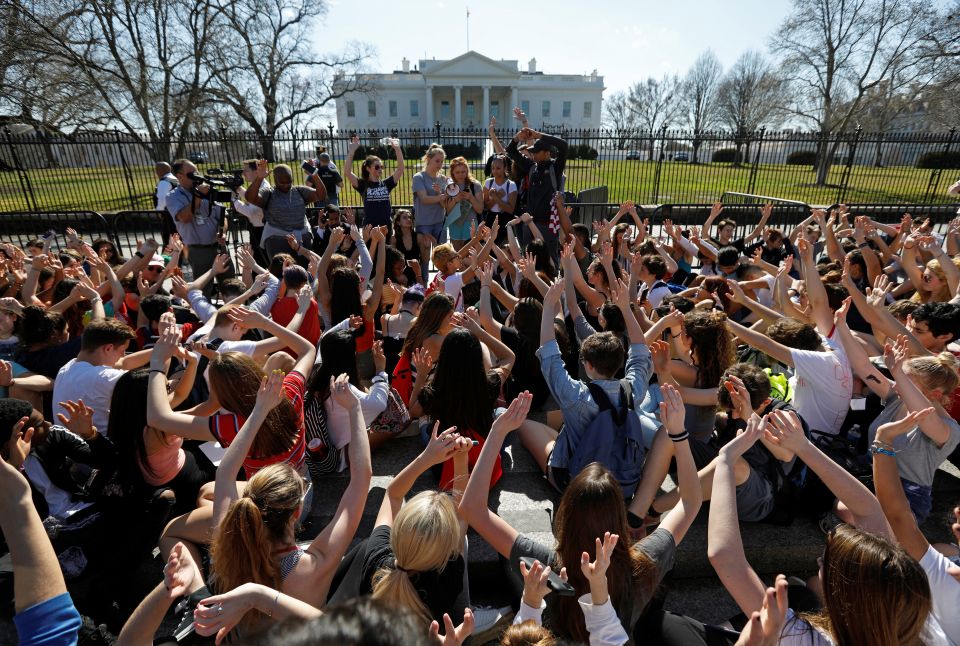 Students who walked out of classes from Montgomery County Public Schools in Maryland protest against gun violence in front of the White House Feb. 21 in Washington. (CNS photo/Kevin Lamarque, Reuters)

President Donald Trump's added to his serial lies — dark lies, not white lies — when he falsely generalized about the Feb. 14 massacre in the Parkland, Florida, high school. "See," he said, "a security guard doesn't know the children, doesn't love the children." Therefore, let's depend on teachers who do "love their pupils" to shoot to kill when they decide gunplay is needed.

Neither facts nor research are behind Trump's slurs on security guards, and especially not police officer Tamara Tisdale, who knows and loves the children at Bethesda-Chevy Chase High School and whose campus, in Montgomery County, Maryland, is eight miles north of the White House. Every semester for the past six years, she has been a guest speaker in my two early-morning Peace Studies classes at the school.

Easygoing and engaging when she speaks to my 70 seniors, most of them college bound, Tisdale is agile in how to relate to them. She talks with them, not at them. Her topics include racial profiling, police body cameras, teenage drinking, texting while driving, a citizen's right to refuse a breathalyzer test, police brutality. She is receptive to students' stories of dealing with the police when pulled over —some negative accounts, some positive.

Most mornings find Tisdale, who carries a loaded gun but has never fired it in 20 years on the force, at the main entrance of the school cheerfully greeting students as they roll in at 7:35 a.m. for their first period classes. "I love the students," she says, "because the majority of the time I interact with them in a positive way." In a thank-you letter to the officer, a student wrote: "I've never had a discussion with a police officer before, so I never really knew much about his or her work. I admire you for all you do and I'm grateful for having you at the school to keep us safe."

Tisdale, who earned a master's degree from the University of Maryland, sees the post-Parkland calls to arm teachers as simplistic and unworkable solutions to the current blight of school shootings. "There is far more to it than giving teachers guns," she says, "ranging from the need for extensive training to the question of where to keep the weapons at school and at home."

I was immensely pleased when a fair number of my students defied threats of being "punished" for skipping school to join 1,300 others at an anti-gun rally at the U.S. Capitol. One of my seniors, Olivia Juliano, carried a large and colorful sign saying "Peace Is Cheaper," a visual published and valorized in both The Washington Post and New York Times.

Another pleasing moment came when reading the reflections of students on the country's gun mania, whether it's arming teachers with glocks or the might of the National Rifle Association.

"I can't wait to spend some time outside the United States," Emma Stewart wrote, "to gain some perspective and inspiration on how to change the minds of our fearful, untrusting community. We need to better know our history to understand and recognize this isn't the way to go. We would have seen by now that more guns do not mean more safety. The American mentality needs therapy. I overall believe the foundation of this country is toxic. We must have a change of heart. We need to take a few steps back. I wouldn't ever trust myself with a gun. Haven't we had enough evidence of how wrong these things go?"

Nearly all the students' reflections, written during a 45-minute period as first drafts, focused on their daily realities:

Days before the Parkland gore, the American Journal of Medicine published a World Health Organization study on the breadth of American gun violence. Ninety one percent of boys and girls under 14 killed by guns live in the United States. Our gun-related murder rate is 25 times higher compared to 22 other high-income nations. "Even though it has half the population of the other 22 nations combined, the U.S. accounted for 82 percent of all guns deaths," the study said. Every day an average of 24 children are shot.

As the bullets keep flying and the National Rifle Association remains hell bent on stuffing cash into the pockets of Washington's politicians to assure that gun laws remain feeble, the nation's funeral homes and hospital ER rooms are guaranteed customers and profits.