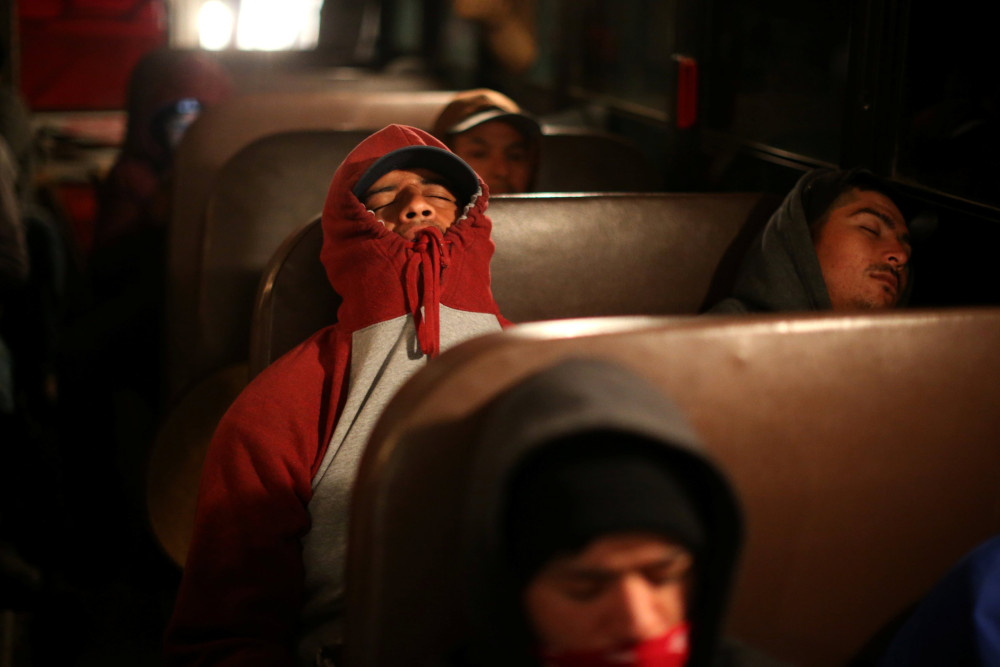 Migrant farmworkers with H-2A visas in King City, Calif., sleep on the bus from their labor camp to the fields to harvest romaine lettuce April 17, 2017. (CNS photo/Reuters/Lucy Nicholson)

The ongoing coronavirus pandemic has shifted even worker organizing, typically a person-to-person staple, to the online world, according to Blanca Estela Delgado.

She is executive director of Border Workers United, which works out of El Paso and Weslaco in south Texas less than 10 miles from the Mexican border.

"COVID is not helping right now," Delgado said. "I would suggest it's 1-on-1 conversations. If you have a church presentation or a church event, 'Hey, I would like to invite you to our event!' That's what we used to do before ... then repeating and phone calls: 'Let's encourage you to come. We're going to have some fun people and taquitos.'"

Recognizing that model was not going to work, Border Workers United beefed up its Facebook presence. It conducts a four-part Monday series of organizing workshops, each series tailored to a specific industry, such as construction, day labor, hospitality and restaurants, cleaning, gardening and transportation.

The sessions are conducted entirely in Spanish, even if the staff has to translate materials from English when no Spanish equivalent is available, Delgado said.

This year's virtual gathering organized by the U.S. Conference of Catholic Bishops' Department of Justice, Peace and Human Development was co-sponsored by 10 USCCB departments and 18 national Catholic organizations.

"One of our other goals is to build worker leadership. As we're bringing awareness about their worker rights, we're identifying leaders: 'Yes. ... I'm going to do this work,'" Delgado said. "That's what we encourage them to do."

"Some people say, 'I don't know how to do this,' so they isolate themselves," she added. "We send messages on the WhatsApp or phone calls, but that takes a lot more time." 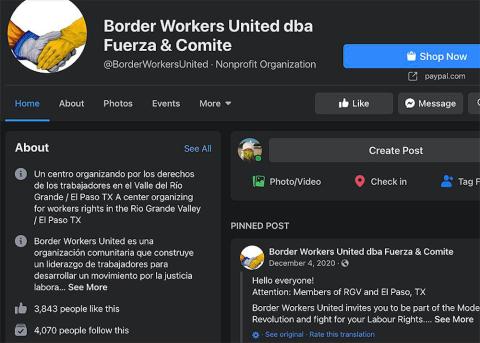 Border Workers United, in one sense, deals with "the least of these" in the labor force. Delgado described her target audience as "immigrants and low-income workers who have little education, are forced out of the labor market (and) are ostracized."

"Fear stops victims from reaching out for help and to file a case" alleging labor trafficking or exploitation and wage theft, Delgado said.

Border Workers United offers an economic development campaign: job preparation program and cooperative development education program. Yet "fear and lack of translation hinders and/or limits" the organization's ability to succeed on those fronts, she added.

"In the beginning, we were trying to develop our own cooperatives. We teach how great cooperatives are for economic growth and development," Delgado said, adding Border Workers United works with groups in California and the Rio Grande Valley on promoting co-ops.

"A lot of this information is needed for them, but one of the issues is that it's limited. We have to take a lot of time to translate this stuff, because it's not in Spanish," she said.

But the finish line is where Delgado points workers. She said she tells them, "Your civic engagement is the key to social justice and achieving your American dream."