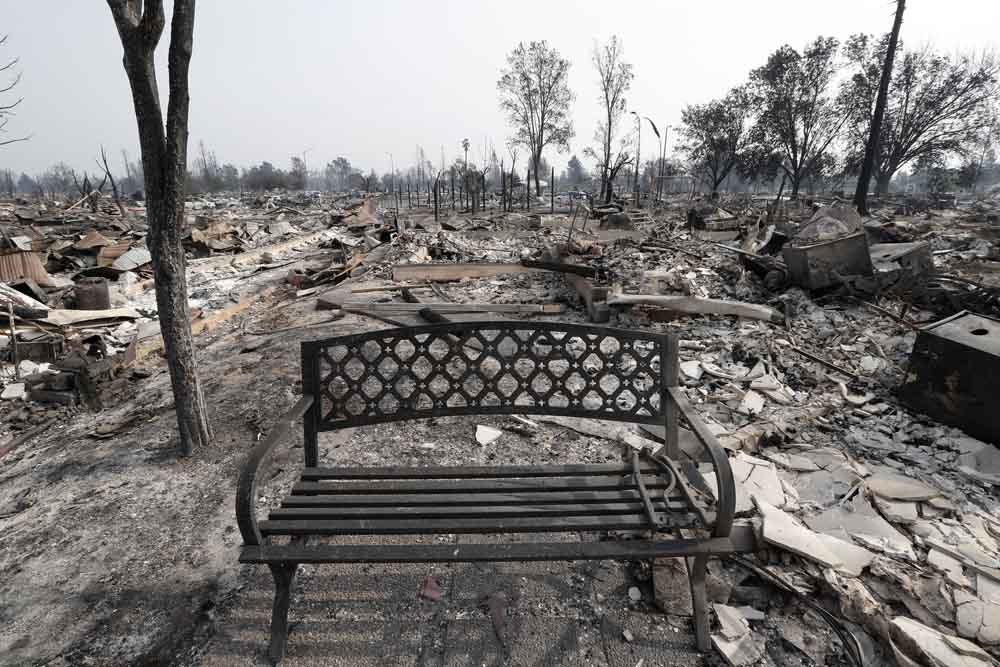 A bench is seen on the porch of a destroyed home Oct. 9 after wildfires in Santa Rosa, Calif. A series of deadly Northern California wildfires has killed at least 17 people, destroyed more than 2,000 buildings, including a section of Cardinal Newman High School in Santa Rosa. (CNS/John G. Mabanglo, EPA)

The Diocese of Santa Rosa responds to the fire crisis in Northern California. Catholics remain the largest religious group in diverse Sonoma County, despite the growth in numbers of religious seekers moving beyond traditional Christianity.

Parishes around the country are marking the centennial of the Fatima apparitions. Here is one in the Chicago area.

An Arkansas parish is named for martyred priest Blessed Stanley Rother, who was killed while serving in Guatemala and whose heroic virtue was recently honored by the church in his native Oklahoma.

A San Diego parish provides Mass and welcome for gay Catholics. Meanwhile, Bishop Peter Jugis of Charlotte, North Carolina, declares that the church must act when its employees publicly disagree with the church's "fundamental moral tenets" against homosexual behavior.

Collecting potatoes for the poor is a tradition at a Cooperstown, New York, parish.

Brazilian Catholics celebrate in Miami. That Portuguese-speaking community is sometimes overlooked in Catholic outreach in the United States focused on the Spanish-speaking.

Atlanta Catholics open their homes and hearts to their fellow Americans and displaced Puerto Ricans.

There's $2.3 million of work to be done on Denver's Cathedral Basilica of the Immaculate Conception. The landmark is plagued by the ongoing assault of Colorado weather.

*A previous version of this story incorrectly stated that Mike Duggan, Detroit's incumbent mayor, is a member of Gesu.