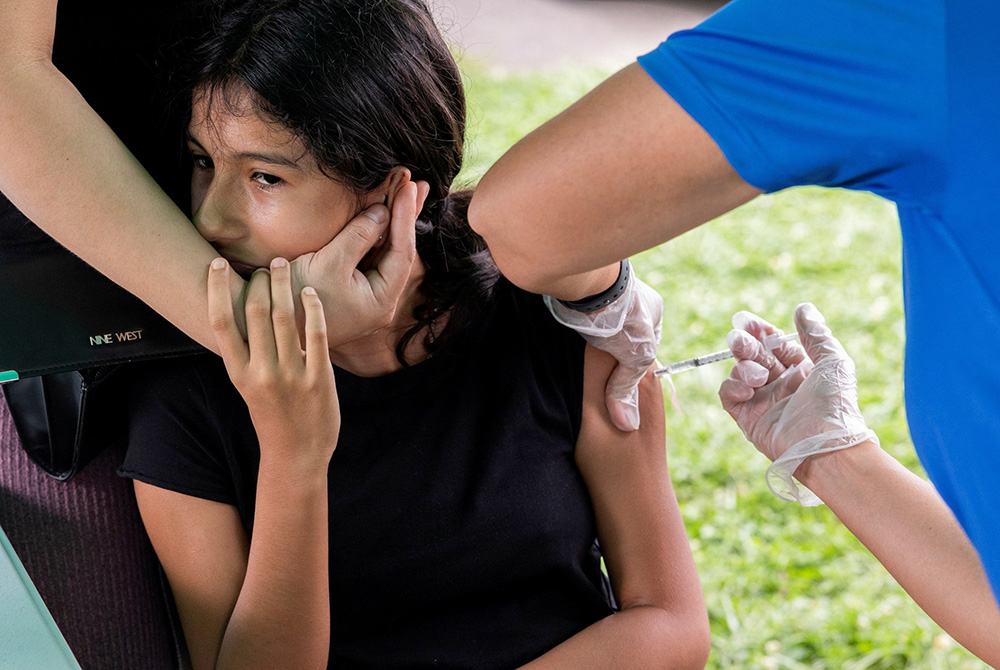 A young person in Bensalem, Pennsylvania, receives the coronavirus vaccine Aug. 22, during an outreach campaign for the Latino community. (CNS/Reuters/Rachel Wisniewski)

Balvina Gómez, a restaurateur and parishioner at St. Francis of Assisi Church in Marshalltown, Iowa, initially did not want to get vaccinated against COVID-19.

"I was strongly against it. My father had a reaction to the shot and passed away soon after getting it last spring. He had many health problems. The doctor said it wasn't the vaccine, that it was just his body. He was not in good health, and neither am I," she said. "I just had a heart operation last year. I was initially against the vaccine."

But in August, Gómez changed her mind and decided to receive both doses of the Moderna vaccine. "My parish priest is organizing a trip to Israel next year, and for us to travel, we need to have our vaccine. I support my family, and I worry about what will happen with my mom. That is why I got vaccinated. I'm afraid of the vaccine but also of COVID — it's scary both ways — but I did it for my mom and kids," Gómez said.

As the delta variant continues to spread and COVID-19 infections rise across the United States, there are still barriers between vaccines and the people who need them. Lack of accessibility, fear and misinformation continue to pose obstacles. There is some evidence that the racial gap in vaccine access has been narrowing, but many Latino communities face particular challenges. 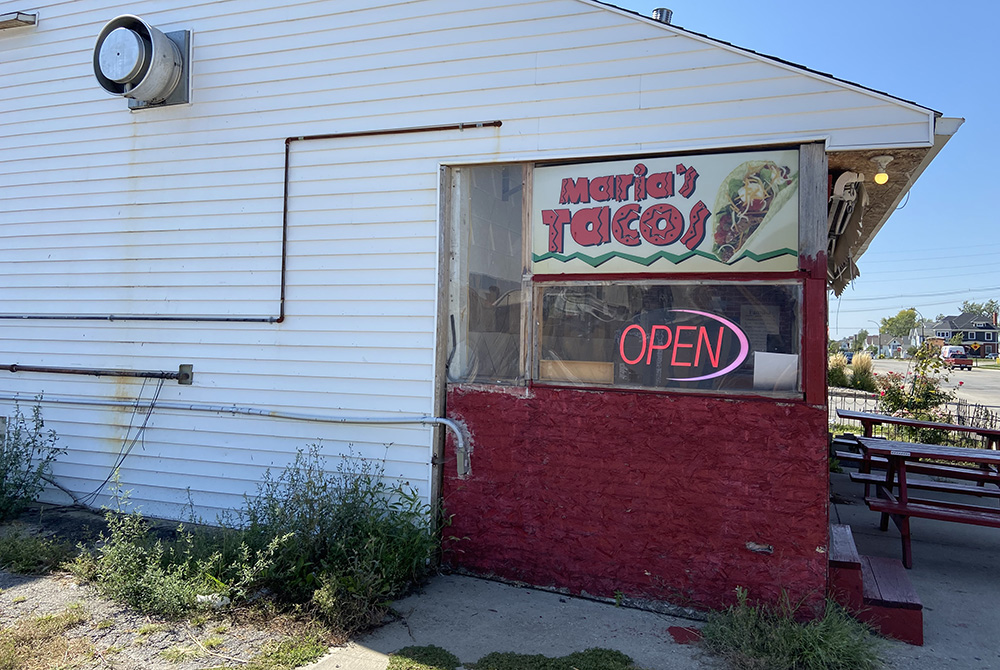 The Henry J. Kaiser Family Foundation, a nonprofit that focuses on health care issues, estimates that about 52% of Hispanics in the U.S. remain unvaccinated, as of Sept. 7.

"I put vaccine hesitancy in a few different categories," said Fr. Alan Dietzenbach, pastor of St. Francis, whose congregation is about 60% Latino. Because material used to develop some of the available vaccines was developed from cell lines collected from aborted fetal cells collected generations ago, Dietzenbach said: "If people hear it had anything to do with abortion, they are dismissive of it.

"Catholics are pro-life and don't want to do anything questionable in that regard," said the priest. "Even though we refer people to articles with information, that is one big stigma."

The Vatican's Congregation for the Doctrine of the Faith has said it is "morally acceptable" for Catholics to take the vaccines available, and Pope Francis has said doing so is a moral obligation.

"I'm afraid of the vaccine but also of COVID — it's scary both ways — but I did it for my mom and kids."
—Balvina Gómez

Dietzenbach said a second obstacle for Latino Catholics to get the vaccine are personal stories, like the one about Gómez's father. "Many anti-vaxxers in the Hispanic community have had the virus; they believe they have the antibodies and don't need the vaccine," said the priest.

An August report from the U.S. Centers for Disease Control and Prevention found that people who had experienced a COVID-19 infection and chose afterwards not to be vaccinated were 2.34 times more likely to experience a reinfection than those who had been infected and then went through a full vaccine cycle.

The predominantly Latino community of Marshalltown, which is home to the JBS Swift & Co. meatpacking plant, suffered gravely during the early stages of the pandemic. In one week in November 2020, the surrounding county of some 400,000 people reported more than 700 active COVID cases. The arrival of vaccines in February 2021 brought cases down, and the parish offered several vaccine clinics, but misinformation continues. 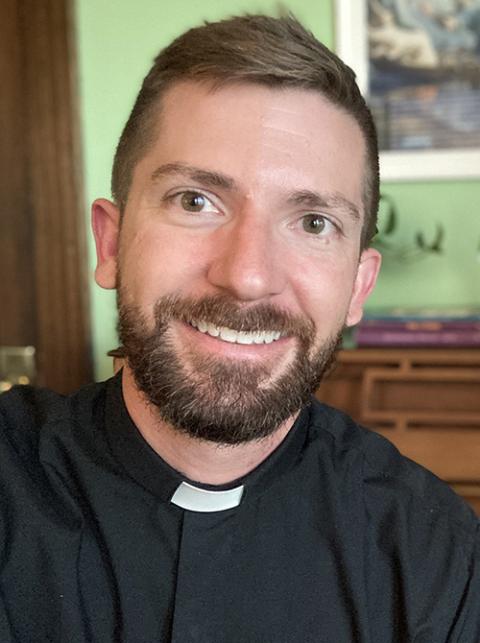 "I told our parishioners that we can trust science, trust our bishops, do this for each other. But as rumors started to come about, as people heard 'so and so died because of the vaccine,' we entered a new phase where people who were already hesitant doubled down in their convictions," Dietzenbach said.

Yesi Sánchez, who has worked as parish secretary for St. Francis of Assisi for three years, said that many parishioners are hesitant to receive the vaccine, especially after viewing social media about why Catholics should not get the shot.

"The majority of the Hispanic community has not been vaccinated," she said.

Sánchez was initially hesitant to get the vaccine, but after seeing Pope Francis and her parish priests get the shot, she changed her mind.

"I am trying to persuade family and close friends to get the shot, but I am respecting their decisions," she said. "My eldest son, who is in middle school, initially did not want it, but when I explained to him why it's a good idea, he changed his mind. I think the Lord heard our prayers to end the pandemic when the shot became available."

While misinformation is rampant across all demographics, a particular obstacle among Latino communities concerns those who are undocumented.

"There is often a mistrust of anything perceived as coming from the government," said Dominican Fr. Thomas Lynch, pastor of St. Pius V Church in Chicago's predominantly Latino Pilsen neighborhood. "Any time people have to fill out a form or give personal information, it's hard if they are undocumented," he said.

A vial labeled with the Pfizer-BioNTech COVID-19 vaccine is seen in this illustration photo. (CNS/Reuters/Dado Ruvic)

Lynch said his parish has hosted several vaccine drives with different organizations, giving people the opportunity to get vaccinated even if they do not have identification.

One organization that helped with these campaigns is the Resurrection Project, a nonprofit that was founded at St. Pius and works to provide Chicago communities with access to affordable housing, help families build financial security, defend immigrant rights and empower collective power. Executive director Dolores Tapia said that Latino communities — in particular undocumented people — have suffered disproportionately throughout the pandemic.

"Undocumented people do the jobs no one wants to do. Those working in factories got infected early on due to a lack of social distancing. Those working in restaurants lost their jobs," Tapia said. "We have been working with churches to provide food and financial support to those who need it, but we're seeing a lot of effects: depression, anxiety, teen drug use. Our social systems were not ready for a pandemic."

Tapia said vaccination has been promoted at various parish and community events.

"At an outdoor Mass in late August we offered concerts and gift cards for the first 10 people to get the vaccine, but only five got it," Tapia said. "In our community, many women make the decision to get vaccinated and take their children. But men hear misinformation — they hear it causes impotency and infertility. Some listen to radio programs or read articles online urging them not to get it." 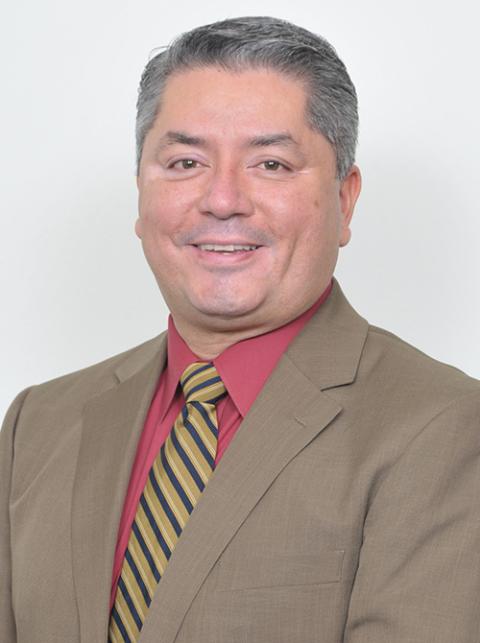 Tapia has been advocating for people in her community to get the vaccine by sharing credible information, including from priests and religious sources, and urging them to evaluate critically the sources they find online.

"This is a global pandemic. We need to get the vaccine. For a while people were asking for religious exemptions to avoid requirements, but now they will not get those because the pope says we all need to do this," she said.

In Denver, Alfonso Lara runs the Centro San Juan Diego, an archdiocesan ministry that provides adult education and legal aid to Latino communities. From January to June, the Centro vaccinated 2,000 individuals at its site and launched clinics at parishes throughout the Archdiocese of Denver.

Lara does not believe that the Spanish-speaking community in Denver has more hesitancy than other communities. "There has been a lot of hesitancy all across the board, not just in the Spanish-speaking community. People fear government control, believe conspiracy theories about microchips, or have children whose friends don't want to get vaccinated. We have many people who find excuses not to do it," he said.

Gómez, the restaurant owner in Iowa, said her doctor told her getting vaccinated could help prevent people in her life getting sick with the virus.

"Most of the people I know have been getting the vaccine," she said. "I have a son with breathing problems, a daughter, mother and brothers with diabetes. My doctor said, 'You're around a lot of people, you can avoid getting others sick.' " 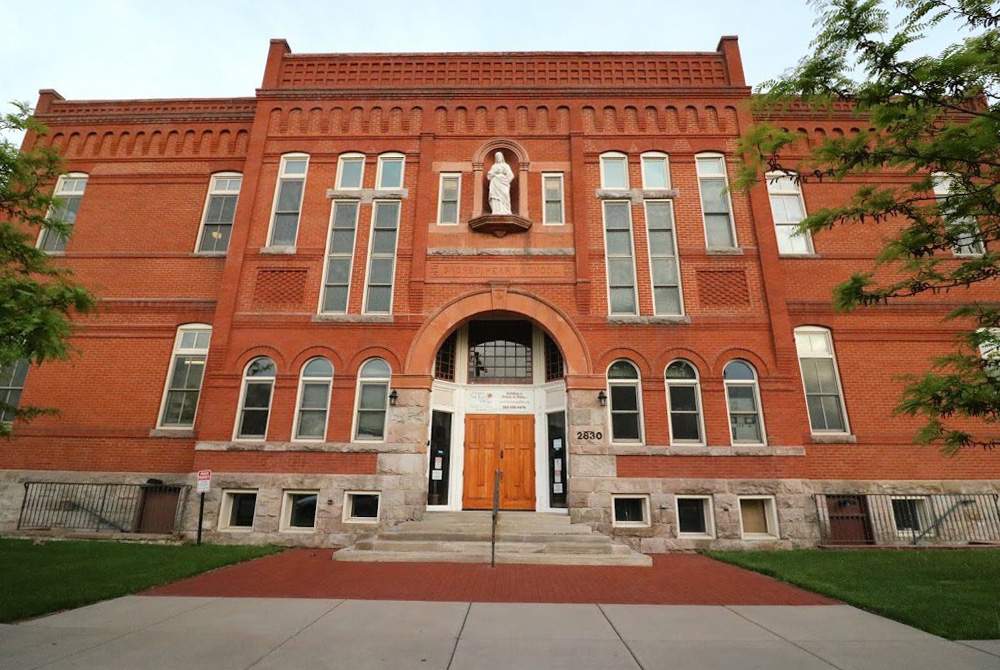