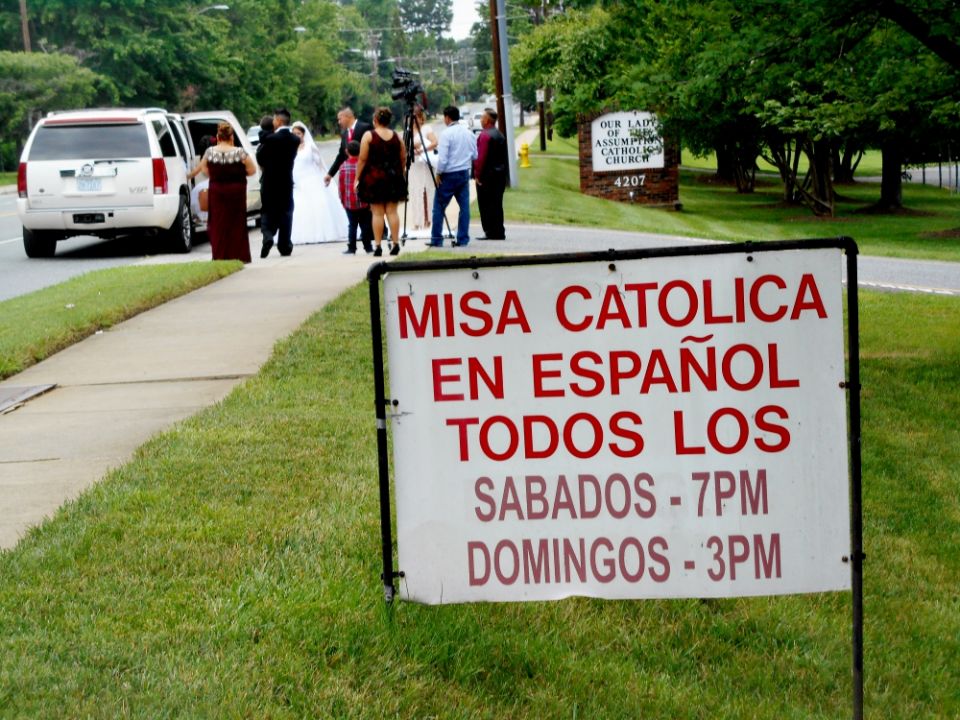 A sign announcing Masses in Spanish is seen as a wedding party gathers at Our Lady of the Assumption Church in Charlotte, North Carolina. (NCR photo/Peter Feuerherd)

Charlotte, N.C. — It’s a steamy early summer Saturday on this city's east side. At Our Lady of the Assumption Church, it's 4:30 p.m., time for weekend vigil Mass.

The congregation is a devout group. Most are on the senior side. A recitation of the rosary precedes the Mass. A choir leads with a series of St. Louis Jesuit and other hymns. The singing is strong, at least as compared to many Catholic gatherings. But with fewer than 100 worshipers, the noise gets swallowed up in the large-ceilinged contemporary church, built in 1989 and architecturally premised on hosting large worship gatherings.

Two hours later, it's time for Spanish Mass. In come the families, many with children who put the formerly empty cry room to use. Assumption Church resonates with the sounds of clapping hands, a keyboard, and a song leader with many followers. The church is nearly filled, with at least at least five times the number of the English-language congregation.

Instead of rushing to the parking lots after Mass, about half remain, for some refreshments as well as a lively charismatic prayer meeting.

"Venidos Santos," chants Adela Contrera, leader of the prayer service, raising her hands high, a plea for the Lord to bless this gathering. The assembly responds in a combination of Spanish and charismatic glossolalia.

Even if the Lord needs to be called upon, the people have already arrived. Tonight, the church can hold the crowd, but often the people spill out into the vestibule, where a television allows them to watch the proceedings. 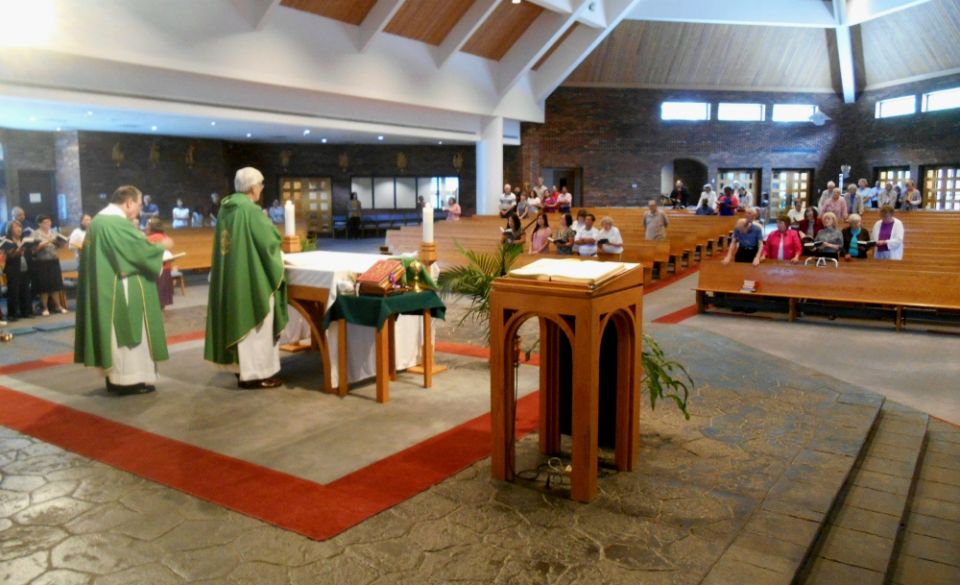 An English-language Mass at Our Lady of the Assumption Parish. With fewer than 100 worshipers, the noise gets swallowed up in the large-ceilinged contemporary church. (NCR photo/Peter Feuerherd) 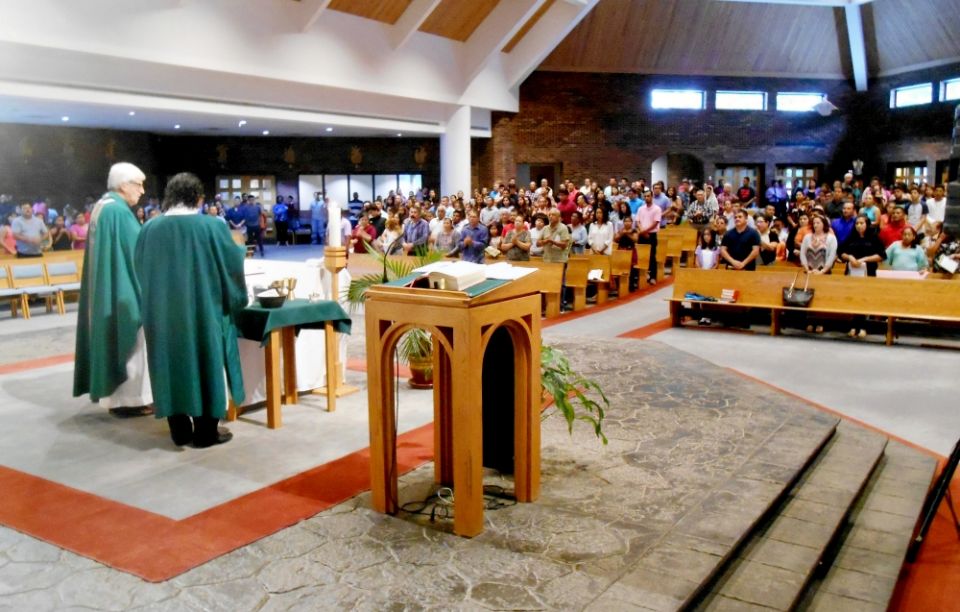 Two hours later, a Spanish-language Mass at Our Lady of the Assumption. The church is nearly filled, with at least at least five times the number of the English-language congregation. (NCR photo/Peter Feuerherd)

Saturday vigil Masses at Our Lady of the Assumption are a sign of the wider church in the United States: a declining, aging Anglo population, replenished by Latino immigrants who are making parishes their own.

For the past few decades, the word went out among Central American and Mexican immigrants: Charlotte, with its suburban-like houses conducive to small yards in even the poorest of neighborhoods, offered an affordable alternative for those who had settled in other U.S. regions, like New York and Texas. It has become a popular second-migration U.S. stop, as well as a place for immigrant newcomers. They have flocked to North Carolina's largest city, transforming parishes like Our Lady of the Assumption, with some estimating that Latinos now make up a majority of Catholic worshipers in the Charlotte Diocese.

Transplanting the Catholic life of Latin America to the city that boasts the Billy Graham Library and the Billy Graham Parkway, where Catholics have long been a minority themselves, hasn't been easy. The welcome mat hasn't always been out.

"We had to knock on the door first," said Jose Zelaya, a native of El Salvador who came to Charlotte 14 years ago from Long Island, New York, describing how immigrant Latino Catholics seek out friendly church environs. "If they don't open, we leave."

The Latino community's search for welcome found an ally in Fr. Philip Scarcella, pastor of Assumption. He opened the doors after coming here 13 years ago from a stint in diocesan chancery tribunal work and as a college professor (he holds a doctorate in European history). The parish now offers three weekend Masses in English, and two in Spanish.

Even that ratio is skewed: Latinos are now an estimated 80 percent of the parish population. Zelaya, an owner of restaurants in both Charlotte and New York, has a son in the parish grade school who plans to attend the local Catholic high school. 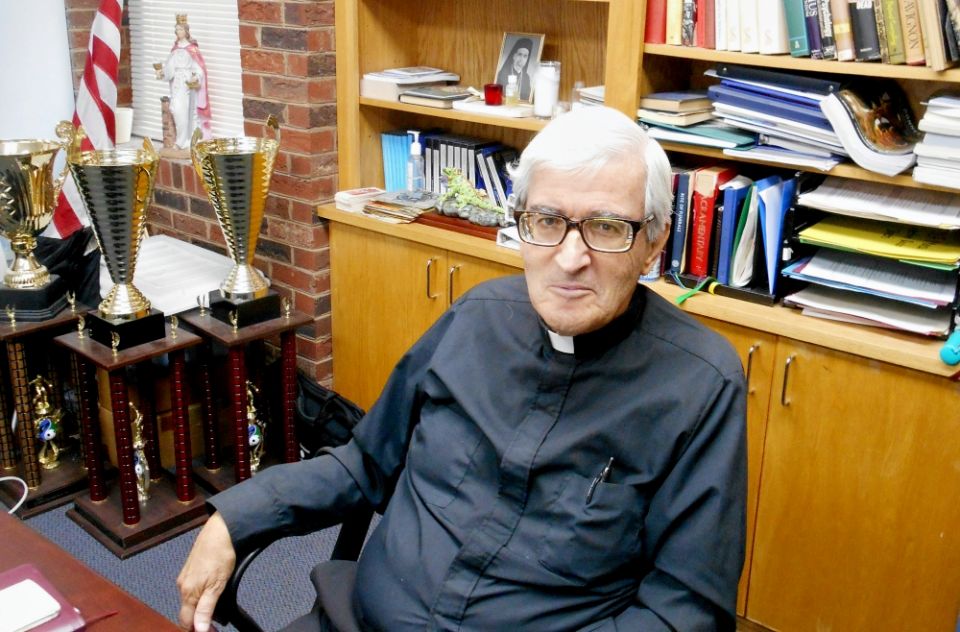 Scarcella said the Latino influx has reinvigorated the parish, much as it has the wider U.S. church. He says it has also invigorated his own priesthood. When he came, there were 400 families in the parish; now the number is around 2,000. He doesn't attribute the massive increase to any personal priestly charisma. Scarcella is scholarly and usually soft-spoken, if opinionated. He notes simply that the Latinos came, and he opened the doors wide.

He's 79, coming toward the end of a long religious vocation, which included a stint with the Jesuits. "I left because I couldn't stand the fighting anymore," he said about his reason for leaving amid the post-Vatican-II tumult that afflicted that community. A native New Yorker, he settled in North Carolina, was ordained, and became a priest in a diocese already growing from northeastern Catholics migrating to the region.

When he came to Assumption, the parish was on a decline, with younger people rarely interested in coming to church. The emerging Latino presence has energized the parish. They bring their children, and make sure they are enrolled in religious education. (Few, however, can afford the tuition at the parish school, reflecting a national trend that worries Catholic educators and Latino activists.)

"They came to the rescue," said Scarcella about Assumption's Latinos.

There was opposition. When Spanish elements were first introduced into the parish's Holy Thursday Mass, Scarcella heard it from a disgruntled Anglo parishioner in the church parking lot afterward.

"I can't see a reason why we have to share our church with these people," she said.

Scarcella ignored the sentiments, for good reason. She was not alone in her complaint, but that did not deter his determination to be a welcoming presence for the growing Latino immigrant presence in Charlotte. 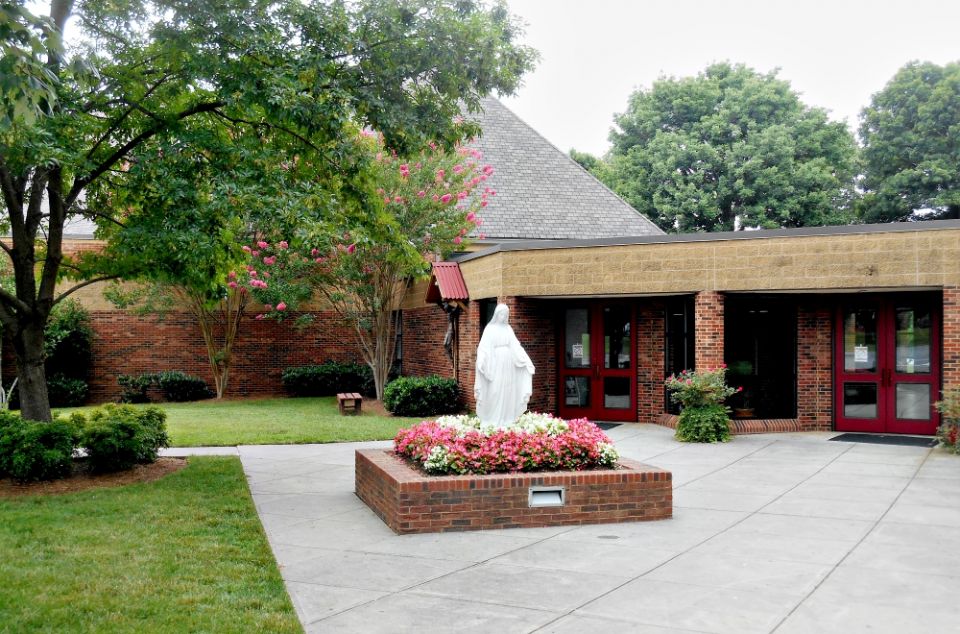 Our Lady of the Assumption Church in Charlotte, North Carolina (NCR photo/Peter Feuerherd)

Scarcella, educated in Belgium and in Rome, was familiar with French and Italian. To serve the Latino immigrants, who roughly number half from Mexico with the other half from Central America, he taught himself Spanish. His recitation of the prayers at Sunday Mass come across to parishioners as an amalgamation of the different Latin American accents.

He started preaching in Spanish, and now has a collection of homilies in the language for all the Sunday liturgical cycles. "You learn a language quickly when you are confronted by having to give a talk," Scarcella recalled.

While Latino ministry places a high priority on Spanish-language skills, understanding culture is perhaps as important.

"I assumed they share the same language, share the same culture and they mostly like each other. That's not true," said Scarcella, noting the wide gap between experiences and education levels among his congregation.

A Mexican who grew up in Mexico City is imbued with a different cultural perspective than a Guatemalan raised in the mountains. But here at Assumption, said Scarcella, they have learned to get along while sharing a common experience of exile and arrival.

The more he got to know them, Scarcella discovered a regular pattern about his new parishioners.

"The poorer ones come frequently as a man and a woman together, not married, with two or three kids,” he said. “They take any kind of job opportunities, and go on and have five or six kids."

A priority at Assumption is getting the church to bless these relationships. The parish will hold massive marriage ceremonies, sometimes involving up to 20 couples, to recognize long-term families.

Their children guarantee that the future of Assumption is Latino. In May, the parish celebrated with 160 first communicants; only one was born to an English-speaking family of European descent. The rest were largely Latino, with a sampling from Vietnam, Burma and the Philippines, together indicative of the parish's website boast that it is Charlotte's most diverse parish. The quinceañera tradition, in which Mexican and other Latino girls mark their 15th birthdays, has become incorporated into parish life as well, with a Mass offered for the festive occasions.

The evidence is clear.

"The Spanish community is young," said Zelaya. "They have kids. That's the future of tomorrow's church."

Scarcella said his leadership style is one to make sure he is not a religious idol. He is low-key, he said, but the parish still needs leadership. He joked that he governs as a kind of benevolent despot, reflecting traditional Latino respect for priesthood and religious life.

Much of the community work and preaching goes to Deacon Luis Flores, a native Salvadoran and New York transplant who came to Charlotte 10 years ago and opened a massage therapy business.

Assumption's Latino Catholics have weathered the nation's recent political crisis with relative calm. As in many cities, Latino life here was disrupted after President Donald Trump's inauguration as immigrants prepared for a crackdown. People thought the worst. There was an initial surge of fear, propelled by rumors of traffic stops and other immigration law-enforcement actions around the city.

At the time, Scarcella counseled calm.

"Right now, don't get caught speeding," he told the congregation, urging those with immigration issues to avoid getting listed on law enforcement computers and to seek out the church as a community to help navigate a difficult time. 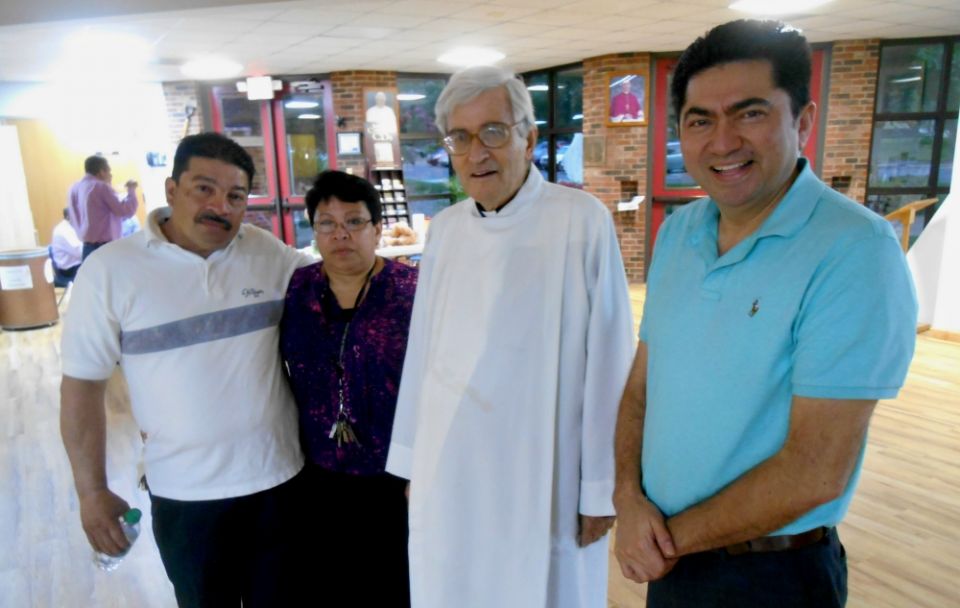 National immigration policies are unlikely to dissuade the sense of ownership Latinos now have in Assumption parish. They look to the future. Zelaya commented that the immigration fear died down as it became clearer that it is unlikely that millions of undocumented workers and their families will be sent home. The neighborhood around Assumption continues to be transformed: What were once failed franchise restaurants are now Mexican and Central American eateries owned by Latinos, their signs beckoning passing motorists in English and Spanish.

Other churches have responded as well. The nearby Nazarene church advertises its services in Spanish. Indicative of the neighborhood diversity, a Muslim center is next door to Assumption School.

Within this mix, Latino parishioners increasingly assert their own place at Assumption Church as they prepare for the Encuentro process, a program of meetings sponsored by the U.S. bishops around the country that will culminate in a national gathering to plan the future for Latino Catholics in the United States.

Assumption will hold its encuentro meetings this summer throughout Charlotte's east side. The strategy is to use homes for gathering places, creating a buzz in the community about how the parish is open to Latinos.

The idea is to generate more outreach, said Zelaya, with the hope that the church's growth will continue. The process will conclude with a celebratory barbeque. It is sure to draw a crowd.