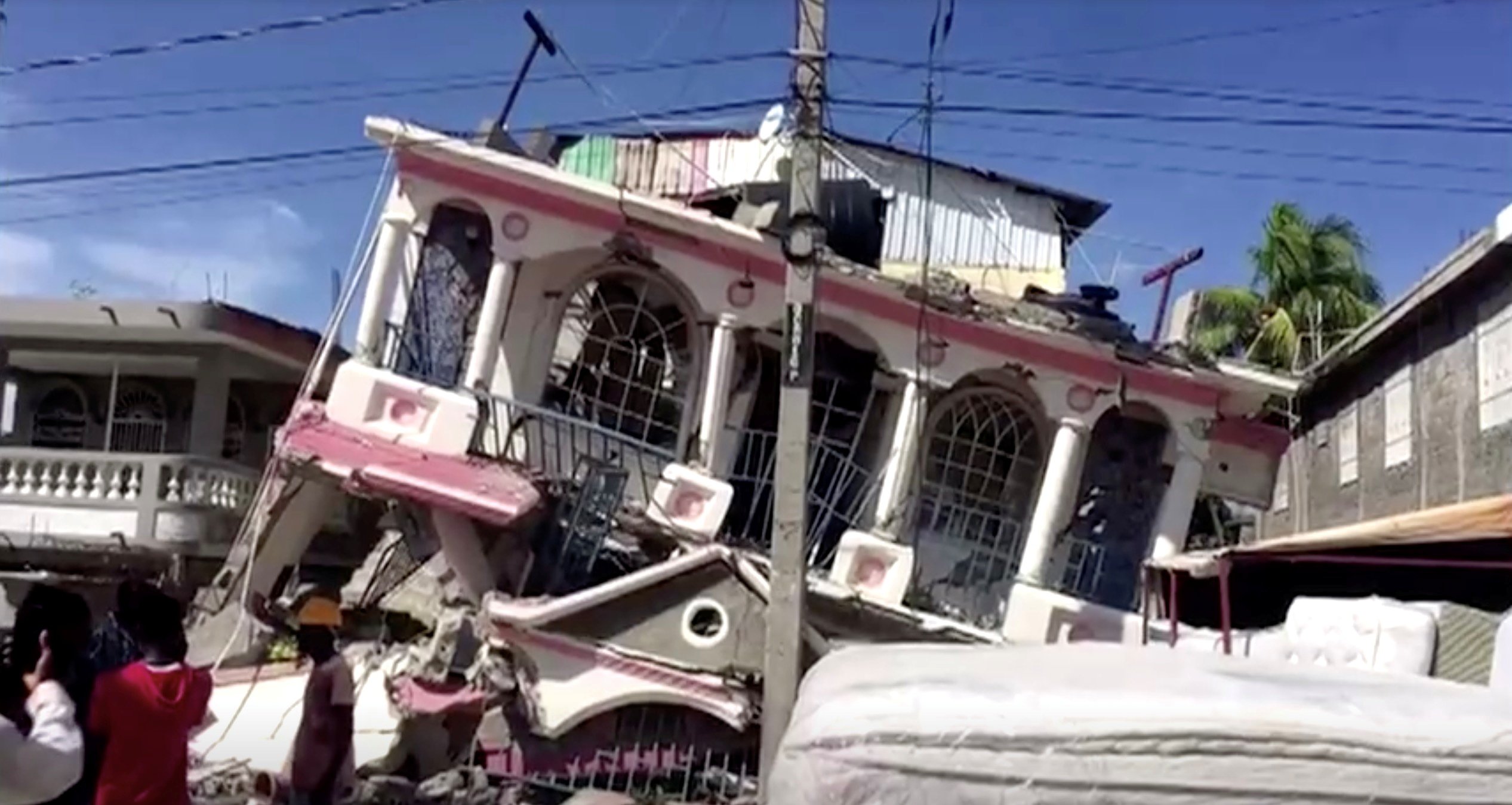 A collapsed building is pictured following a magnitude 7.2 earthquake in Les Cayes, Haiti, in this still image taken from a video Aug. 14, 2021. (CNS photo/Reuters TV)

Even before news of a devastating Aug. 14 earthquake in Haiti arrived, U.S. churches such as the Cathedral of the Most Sacred Heart of Jesus in the Diocese of Knoxville, Tennessee, were already lamenting the lack of visits between their parish communities and the people of Haiti.

"It's really frustrating. We need to be communicating with our sisters and brothers in Haiti on a more personal level than just on WhatsApp," said Matt Webster, one of the leaders of the cathedral's Haiti Outreach Program, according to an Aug. 10 newsletter.

But news of the devastation, the climbing death toll, and injuries from the 7.2-magnitude earthquake have sent U.S. Catholic communities such as the one in Knoxville and faith-based organizations with ties to Haiti scrambling for ways to help, even if the faith groups or sister parishes with whom they have direct contact were not affected.

With more than 1,400 people confirmed dead and more than 6,000 reported injured as of Aug. 17, U.S. Catholics are urging help be directed toward the island as well as to Haitian immigrants.

Washington's Holy Trinity Parish, through its St. Jean Baptiste Committee, is working with the organization Food for the Poor, to collect money to secure barges to send food and medical supplies to Haiti. Parishioners are donating online and also will be taking up a second collection during weekend Masses to help.

In St. Louis, just hours after the news of the earthquake, 350 people volunteered at the Chaminade Preparatory High School, a Catholic institution, to pack food to be shipped to Haiti, distributed by the CRUDEM Foundation.

Retired Archbishop Robert J. Carlson of St. Louis led the group in prayer as they participated in the "packathon" where volunteers placed rice, pinto beans, freeze-dried vegetables and vitamins in bags sealed then placed in a box. They will be distributed to Hôpital Sacré Coeur in Milot, Haiti.

The organization Faith in Action urged donations to places such as Catholic Relief Services, the U.S. bishops' overseas relief and development agency, and the Catholic Diocese in Les Cayes, Haiti, saying that the "people of Haiti were already at their wit's end and taking all that they can handle" even before the act of nature.

Haiti went through the assassination of its president on July 7 and never had truly recovered from a previous quake in 2010 that left more than 220,000 dead

"The earthquake destroyed roads, bridges, and other infrastructure that were already unable to meet the needs of the people," said Faith in Action in an Aug. 16 news release. "Many hospitals, churches, hotels, businesses, homes are now completely destroyed and inhabitable with many people still trapped inside and underneath the rubble."

"On top of these dire conditions," it said, the region was "right in the middle of hurricane season." Early Aug. 17 Tropical Storm Grace passed over the southwestern part of Haiti, dumping several inches of rain and complicating quake rescue efforts.

Faith in Action urged humanitarian help from the U.S. government and the international community "to make Haiti a priority and move swiftly with resources, search and rescue teams, heavy equipment, and other appropriate means to rescue and save as many lives as possible."

COVID-19 is making the situation even more dire, Faith in Action said, urging international aid to reinforce civil society so "that rebuilding assistance reaches the people and communities that need it the most."

The organization also said the earthquake is "yet another reason for the U.S. to stop deportation flights to Haiti."

"The people of Haiti need our help, prayer, support, compassion, and solidarity now more than ever. Haiti does not seem to be able to get a break that is so desperately needed and praying for," Faith in Action said.

"When one person hurts, humanity is hurting, when one person is suffering the whole human race is suffering," it added. "Let's come together to not only pray for Haiti but also take action that will save lives and create a better, more secure future for Haitian children and families."