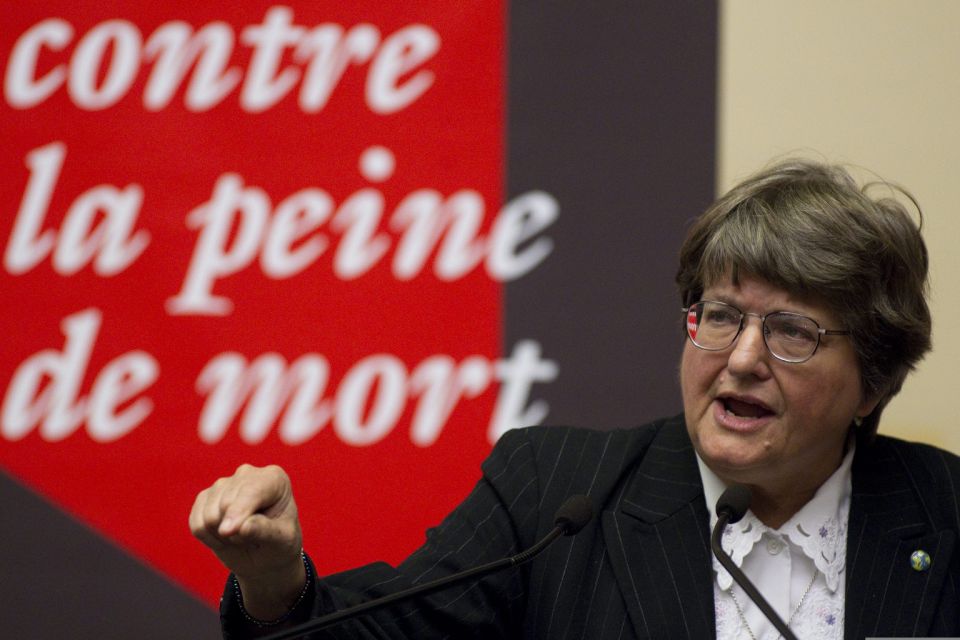 St. Joseph Sr. Helen Prejean is one of the many headliners invited to a speaker series as part of the Bishop Keane Institute. (CNS photo/EPA/Salvatore Di Nolfi)

Virginia seems an unlikely place for a parish-based Catholic speakers series that a university or college might be glad to call its own.

The sprawling Diocese of Richmond, which encompasses a huge swath of the state, is still considered mission territory. Within its boundaries, Catholics account for just 4.5 percent of the population, according to the most recent figures.

So how has the Bishop Keane Institute at 600-family Immaculate Conception Catholic Church in Hampton, Virginia, tucked along Virginia's southeastern coast, managed to pull in some of the biggest names on the Catholic lecture circuit during the past four years?

"The Richmond diocese is small in the scheme of things," said Cass Hooker, director of evangelization at the parish, who helps oversee the speaker series. "We're not a heavily Catholic population. We're Hampton, Virginia. Who's ever heard of Hampton?"

"There are a few other parishes that do this, but they're usually huge parishes in   huge cities in the United States," like New York or Chicago or Los Angeles, Martin said. "But even then, it's rare. So it's a visionary program."

While the Keane program's founder made a point of going after big-name speakers so that the series would be taken seriously, it was in the service of creating a space where people could come and hear the leading voices in the church and even voices that aren't necessarily Catholic, which have an impact on faith formation, he said.

"My goal for Keane was not just bringing big names in and, you know, 'Oh, look at who we brought,' but sort of stretching people and allowing people the opportunity to explore all aspects of their faith," said Fr. Sean Prince, Immaculate Conception's pastor until a year ago and who is credited with pioneering the speakers program as it exists now.

For decades the parish put a priority on adult-faith formation, part of which included talks from time to time by such prominent Catholics as the late Fr. Richard McBrien, said Msgr. Robert Perkins, a former pastor.

Prince, however, took it to another level not long after arriving at Immaculate Conception in 2013, Perkins added, taking advantage of a real estate deal arranged by another former pastor, Fr. Robert French, who died in 2016. The deal allowed the building of an apartment complex on church grounds in exchange for a certain percentage of the profits.

That revenue stream, earmarked for a foundation focused on outreach to seniors and for adult-faith formation, had made a substantial amount of funding available to Prince by the time he got to the parish.

He wound up working in tandem with another priest, Fr. Michael Renninger, pastor at St. Mary Catholic Church in Richmond, a larger parish than Immaculate Conception, which had also, over the years, featured speakers on an occasional basis.

The two priests thought they could market a "two-fer" invitation to speakers, offering them the chance to address two audiences — one in Hampton on a Friday night and another the next morning in Richmond, about a 90-minute drive away. The parishes would split the air fare and lodging costs and each would offer a stipend.

The Hampton program, named for Bishop John Keane, the fifth bishop of Richmond and the first rector of Catholic University, and its counterpart at St. Mary's, named for Msgr. Charles Kelly, a previous pastor, both got on track around the same time, about 2015.

Roughly 85 percent of the Keane speakers have also spoken at the Kelly forum, Renninger said, who noted, like Prince, that Catholics share a hunger for the kind of talks the programs offer: "I think what people are hungry for is to hear various aspects of faith addressed in an intelligent, non-polarized, cogent way where good information can be shared and good questions can be asked."

Renninger said that Martin's appearance at the Kelly forum in Richmond, which attracted its largest audience to date, drew people from as far away as Northern Virginia and North Carolina.

Martin said that what makes it tough for other parishes to bring in speakers like those at the Bishop Keane program is their ability to offer the kind of stipend it takes to get them. 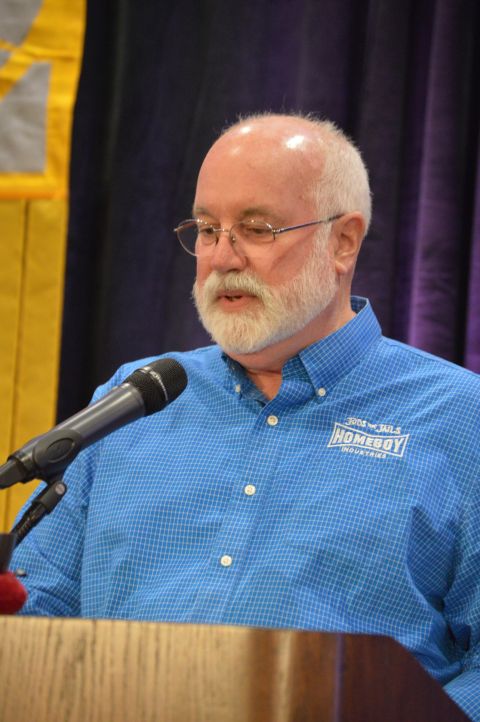 Asked if he could offer even a ballpark range for how much that is, Martin deferred to Prince.

"I would say it was a great deal more than what I normally get from a parish, let's put it that way," he said, having already made clear that "for the record, by the way, my stipend went to my Jesuit community."

Prince said there really is no average stipend and that he personally negotiated each of the agreements that brought the Keane speakers to Virginia during his time there.

"Some of them, because they're big-name speakers, I did have to sort of go back and forth with them and offer a little more money just to get them to come," he said.

A fairly well-known retreat leader can be brought to a parish for a two-day event for $1,500 to $2,000, he noted, adding that a couple more thousand dollars gets one in the price range of the Keane speakers.

Hooker, who has been involved in the program with Prince from the start, declined to get into specifics about how much some of the series' earlier speakers were paid.

Since his departure — Prince is now secretary to Bishop Barry Knestout — Hooker and a committee of parishioners come up with names of proposed speakers, who in addition to needing approval from the diocese are vetted internally through a process that includes checking out any videos available on YouTube.

"We have taken some people out of the running because of how they present," Hooker said.

One of the parishioners who helps winnow the field is a retired high school English teacher from nearby Newport News, who has heard almost every one of the more than 20 Keane speakers since the program kicked off in 2015.

"As a Catholic, I would have to say it's broadened my perspective," said John White, 65, who likened the events to spiritual TED Talks.

"Our faith is alive; it's now," he said. "God is not a God of the past and so anything that enlightens us, that helps us to gain wisdom about the world at large — it's done all of that. … It's been just fascinating and insightful and just brilliant."

Prince said that one of the more humorous speakers was Amy-Jill Levine, a professor of New Testament and Jewish studies at Vanderbilt University.

"The way that she presents Jesus and unlocks Jesus and unpacks Jesus' life and ministry, for many people, they commented, 'I had not seen it in that light,' " Prince said. " 'Coming to understand the Jewish tradition more, because of her, I now understand, you know, Jesus a little better because of that.' "

Levine, in an email, said what she remembers from her appearance in Hampton two years ago is "warm hospitality, laughter and, especially, excellent questions from people who wanted to know more about the Bible, its historical context and various ways of understanding parables."

Her visit as part of the Keane series, she noted, was everything a program of its kind should be: "The participants warmly welcomed me, a Jewish woman, to talk about Jesus in his Jewish context, and to discuss the common roots of Judaism and Christianity."

Asked how hungry people are for knowledge and different perspectives that might stretch them, given the polarization in our culture, Levine responded: "We need to learn how to agree to disagree."

Her conclusion: "This means we do not need to be alike, think alike, even worship alike, in order to give and receive love."

Upcoming speakers include NCR columnist Phyllis Zagano, who has written about the issue of women deacons, and Robert Ellsberg, publisher of Orbis Books, who worked with Dorothy Day.

'What Do You Believe Now?' Film follows up with millennials 17 years later