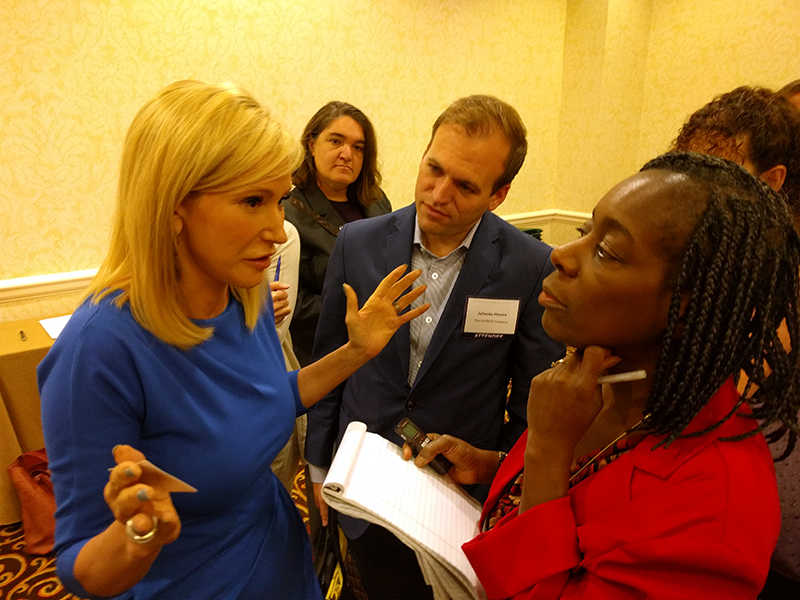 Paula White, President Trump's most prominent spiritual adviser, made the statement in front of a crowd of journalists Saturday (Sept. 9) at the Religion News Association's annual conference in Nashville.

White also said she regretted saying last month on the PTL Network's "The Jim Bakker Show" that the president is someone "authentically raised up by God." But that's not because she doesn't believe what she said.

The reason she regretted her comment, she said, was "because of the responsibility of the role that I have." That's something she still is learning, she noted, since the president called her a decade and a half ago after seeing her preach on TV and the two forged an unlikely relationship.

Earlier this year, White became the first clergywoman to pray at a presidential inauguration and a leader among the evangelical advisers to the president who since have gathered for meetings, dinners, photo ops and conference calls.

Responding to a question from Think Progress' Jack Jenkins on her view that Trump was raised up by God, she said "I believe that for President Obama" as well. And had Hillary Clinton won the 2016 presidential race, White said she would have said the same thing about her.

"I believe that authority is raised up by God, and I understand that I don't understand all things and what his purposes are," she said. "He's the sovereign God."

White also said that Trump "100 percent is a Christian who understands ... repentance," though, as his pastor, she said she wouldn't divulge what he has repented for.

And in response to a question from freelance religion reporter Guthrie Graves-Fitzsimmons, she said there "absolutely" is a line Trump could cross that would cause her to criticize him publicly, though she also would not say what that line might be.

"Yes, there is a line with the president, or any line that if I felt was in extreme violation, I would publicly criticize," she said. "We tend to privately criticize and publicly stay together because I believe that's how within a family, within church, within leadership, that is how things should be handled."

White and other evangelical advisers to the president have been criticized for not distancing themselves from the president after his response to a white nationalist rally in Charlottesville, Va., that left one woman dead. After Trump adamantly condemned violence on "many sides," members of several business councils and the President's Committee on the Arts and Humanities resigned.

One pastor, A.R. Bernard of Brooklyn, did formally resign from Trump's evangelical advisory board, though many have pointed out that board formally dissolved when the campaign ended and the evangelicals who now have the ear of the president are not part of any organized group.

White, who pastors a largely African-American congregation at New Destiny Christian Center in Apopka, Fla., noted in response to a question about their views of the president's policies from Sarah Pulliam Bailey of The Washington Post: "For 33 years of my life, I've predominantly done work in the African-American community. I've been a bridge builder and one thing that I can say is 1,000 percent — and I know this is going to open up a lot — is that our president is not a racist.

"As a white person, I don't think any of us can fully understand what it is to be a black person in America today, so what I do know is that our nation has a lot of work to do and I believe it has to start with the community of faith."

New Destiny Christian Center church now is preparing to act as a shelter during Hurricane Irma, she said.