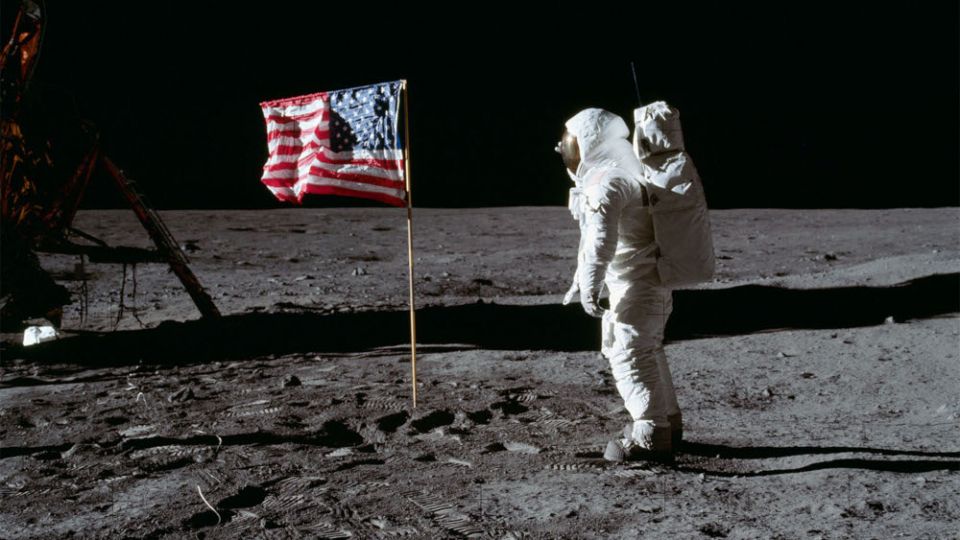 Astronaut Buzz Aldrin salutes the deployed United States flag during an Apollo 11 extravehicular activity on the lunar surface in July 1969. The lunar module is on the left, and the footprints of the astronauts are visible in the soil of the moon. (Neil Armstrong/NASA/Creative Commons)

Where humans go, faith seems to follow. It’s no less true of NASA’s first manned mission to land on the moon, when astronauts Neil Armstrong, Edwin “Buzz” Aldrin and Michael Collins made their way farther into the heavens than anyone had gone before.

Here are five faith facts about the moon landing, which half a century later still inspires awe and wonder in people of all faiths and no faith.

When Aldrin first floated the idea of celebrating Communion during the Apollo 11 mission to the moon, NASA administrators responded with skepticism. The agency had already fended off a lawsuit filed after astronauts broadcast themselves reading from the Book of Genesis during the Apollo 8 mission, which atheist activist Madalyn Murray O’Hair derided as a violation of the separation of church and state. (Her case was ultimately dismissed.)

But Aldrin, who would later describe the mission as "part of God’s eternal plan for man," was insistent, and officials eventually granted him permission to hold a service under the condition that he keep it quiet.

Aldrin then approached the pastor of his church — the Rev. Dean Woodruff of Webster Presbyterian Church near Houston — about the idea, where the questions shifted from legal to theological. 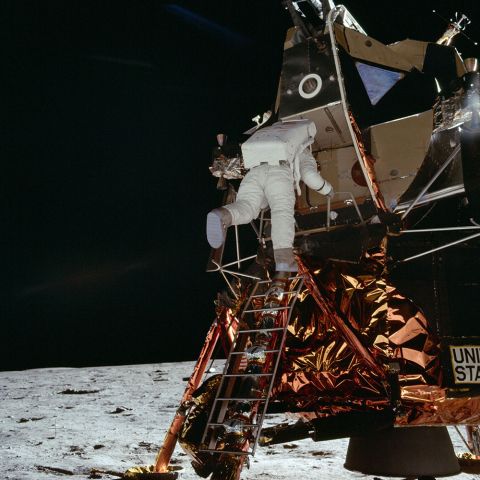 Astronaut Edwin “Buzz” Aldrin Jr., lunar module pilot, egresses the lunar module and begins to descend the ladder as he prepares to walk on the moon. (Neil Armstrong/NASA/Creative Commons)

Although Aldrin was an ordained Presbyterian elder, it was unclear whether he would be allowed to oversee Communion on his own. But when his pastor asked the Presbyterian Church’s stated clerk, one of the highest positions in the denomination, the official offered a quick yes. Woodruff then procured a small silver cup for Aldrin to carry into orbit, making sure that it would fit the weight requirements.

The plan finally came to fruition shortly after the Eagle lunar lander touched down on the moon on July 20, 1969. Sitting next to Armstrong, Aldrin pulled out the chalice, wine and bread from his "personal preference kit," then spoke into the radio.

"This is the LM pilot," he said, referring to the lunar module. "I would like to take this opportunity to ask every person listening in, whoever and wherever they may be, to pause for a moment and contemplate the events of the past few hours and to give thanks in his or her own way."

Aldrin took a moment to read silently from John 15:5, which he had scrawled on a 3-by-5-inch card: "I am the vine, you are the branches. Whoever remains in me, and I in him, will bear much fruit; for you can do nothing without me."

The astronaut then set about performing the Christian ritual alone (Armstrong did not partake), making him the first person to celebrate a religious rite on a heavenly body other than Earth.

"I poured the wine into the chalice our church had given me," he recalled in a 1970 article for Guideposts magazine. "In the one-sixth gravity of the moon the wine curled slowly and gracefully up the side of the cup. It was interesting to think that the very first liquid ever poured on the moon, and the first food eaten there, were communion elements."

2. The "church of the astronauts" still celebrates Lunar Communion Sunday.

Webster Presbyterian Church still celebrates Lunar Communion Sunday every year on the Sunday closest to the July 20 anniversary of the moon landing.

According to the Presbyterian Church (USA) Office of the General Assembly, Webster Presbyterian has been called the "church of the astronauts." It’s been the spiritual home of many astronauts and employees from the nearby Johnson Space Center, including John Glenn, one of NASA’s original Mercury Seven astronauts and the first American to orbit the Earth, and Jack Kinzler, who engineered the American flag Aldrin and Armstrong planted on the moon so it would wave in space.

Aldrin’s celebration of Communion aboard the Eagle "as an extension of our congregation" is one of the milestones in the church's 126-year history, according to its website.

To this day, Lunar Communion Sunday at Webster Presbyterian includes a reading of a passage from Psalm 8: "When I consider thy heavens, the work of thy fingers, the moon and the stars, which thou hast ordained; What is man, that thou art mindful of him? and the son of man, that thou visitest him?" The passage was one of two Aldrin read in space, and Webster Presbyterian had read it during its service on the day of the moon landing, according to a 2014 report in the Houston Chronicle.

Clay Anderson, a retired astronaut who served aboard the International Space Station, will preach at this year’s anniversary celebration, according to the church website.

The church also displays a replica of the chalice Aldrin used. The real one is in a bank vault, according to the Chronicle.

3. The pope blessed the Apollo 11 astronauts.

Like millions of people around the world, the pope at the time, St. Paul VI, watched the moon landing on television. 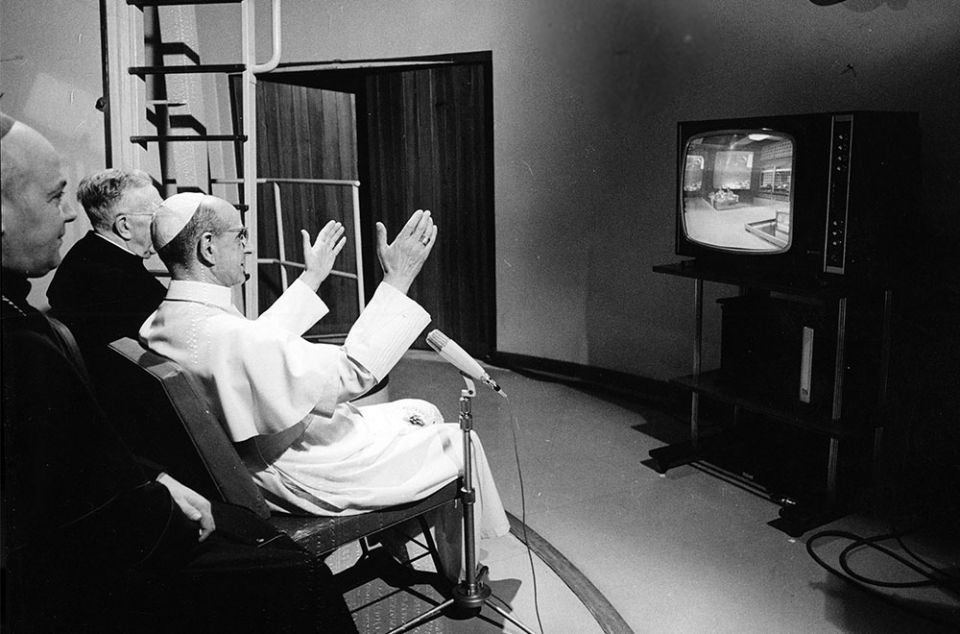 He then greeted and blessed the astronauts in English:

"Here, from His Observatory at Castel Gandolfo, near Rome, Pope Paul the Sixth is speaking to you astronauts.

"Honour, greetings and blessings to you, conquerors of the Moon, pale lamp of our nights and (our) dreams! Bring to her, with your living presence, the voice of the spirit, a hymn to God, our Creator and our Father.

"We are close to you, with our good wishes and with our prayers. Together with the whole Catholic Church, Pope (Paul) the Sixth salutes you."

The pope later met the Apollo 11 astronauts and their wives at the Vatican.

4. There was an Apollo Prayer League.

Although Aldrin kept his Communion on the moon quiet for years, he had spiritual backup. 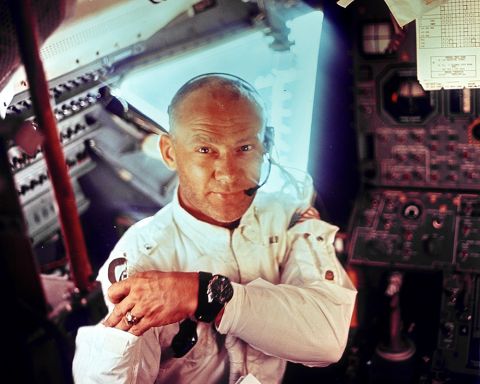 When O’Hair filed her lawsuit alleging Apollo 8 astronauts violated the U.S. Constitution’s establishment clause by reading from the Book of Genesis while in orbit, a group that called itself the Apollo Prayer League leapt to the astronauts’ defense. The League eventually accrued more than 8 million signatures and letters championing the religious freedom of astronauts, according to Wired.

The group was formed years earlier by NASA’s then-chaplain, a scientist and Presbyterian minister named John Maxwell Stout, and his wife, Helen, in the wake of the Apollo 1 fire that killed three astronauts. The final wishes of one of the felled astronauts, Ed White II, included putting a Bible on the moon, a mission Stout took up in his honor.

5. The Bible got to the moon (eventually).

Aldrin brought a scrap of Scripture with him to the lunar surface, likely because a full printed copy of the holy book did not fit within NASA’s stringent weight requirements. So the Apollo Prayer League, determined to land a Bible on the moon, created microfilm versions of the Bible. 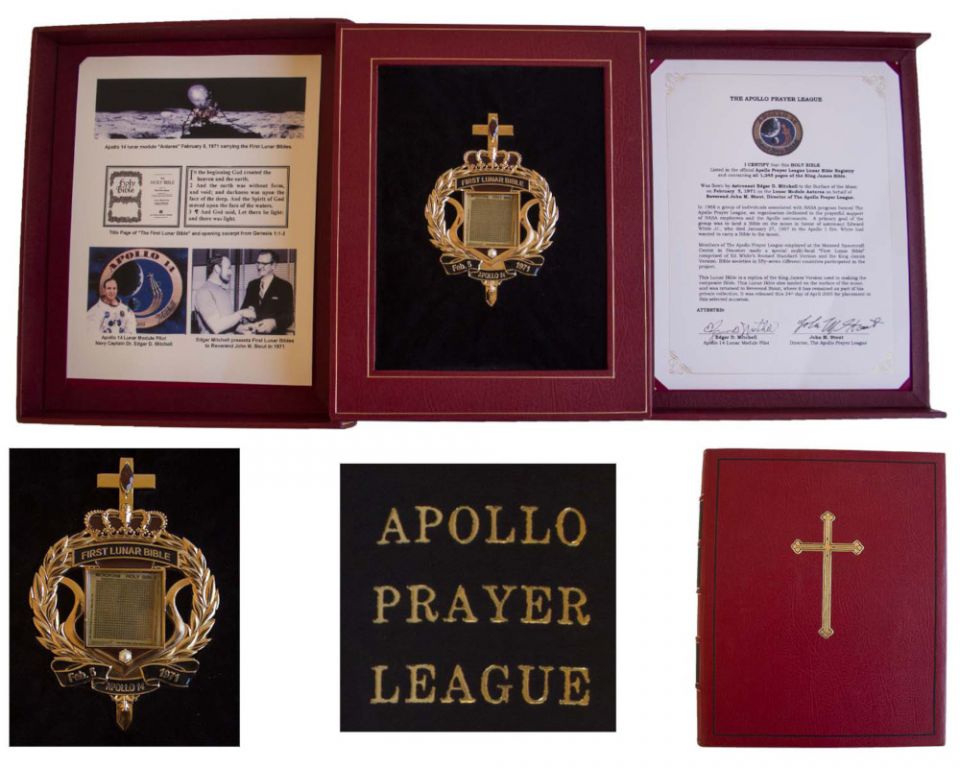 Even so, landing one on Earth’s natural satellite proved tricky. The first two attempts failed: Apollo 12 astronauts mistakenly stowed a single microfilm Bible in the orbiter instead of the lander, and while Apollo 13 also carried microfilm Bibles aboard (reportedly presented to the astronauts by then-U.S. Rep. George H.W. Bush), that mission famously never landed on the moon due to a mechanical malfunction.

Astronaut Edgar Mitchell, however, managed to lug 100 microfilm Bibles to the surface of the moon with him during the Apollo 14 mission and returned them to Earth.

The Bibles survive to this day and are often subject to heated bidding wars at auction, each fetching as much as $50,000.

People | 5 faith facts about the moon landing: Space Communion and a prayer league of its own