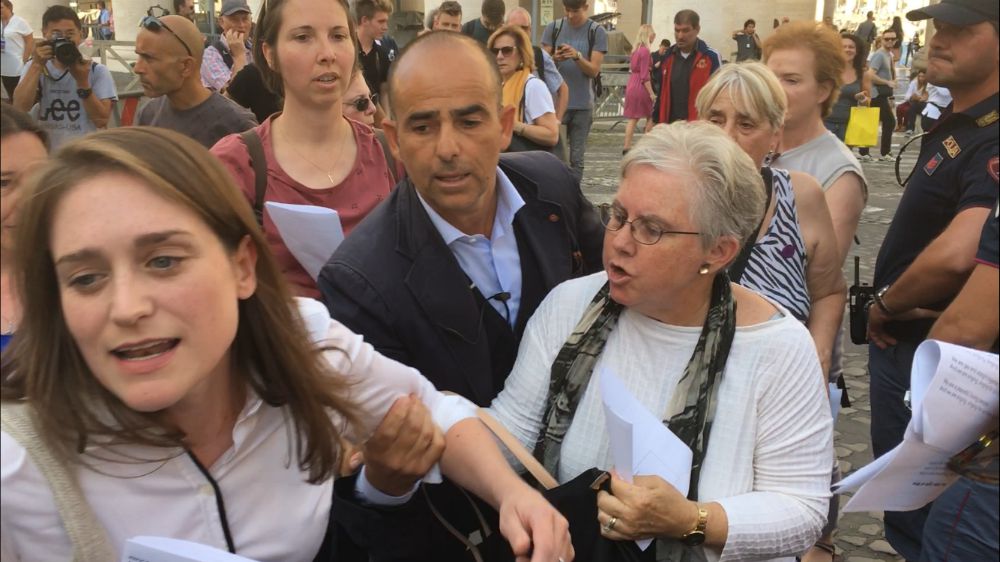 A peaceful protest just steps from St. Peter's Square turned into a clash with Roman police, as bishops and cardinals were entering the opening session* of the Synod of Young People, the Faith and Vocational Discernment on Oct. 3.

Organized by the Women's Ordination Conference (WOC), the protest featured chanting by participants with the names of cardinals read out like a litany. After each name, the group responded "Let women vote!"

Protestors also shouted, "Knock, knock. Who's there? More than half the church!"

The group was protesting the fact that no woman will be allowed to vote at this year's synod, though several female observers have been selected to attend. Two male religious brothers have been given voting power.

Though WOC typically applies for a permit for its witnesses, organizers were aware that they would never be granted a permit to demonstrate anywhere near the square.

About 20 people, both women and men, many of them young adults, took part in the rally. Many of the protestors had participated in a symposium called Catholic Women Speak: Visions and Vocations at the Pontifical Antonianum University in Rome on Oct. 1.

The demonstration carried on for about 15 minutes, attracting the attention of many members of the media as well as tourists.

The protest was timed for the hour when bishops and cardinals would be entering the synod meeting, in the hope of attracting the attention of members of the hierarchy.

To the group's surprise, two Irish prelates, Archbishop Eamon Martin of Armagh and Primate of all Ireland, and Bishop Dónal McKeown of Derry, approached the group when they noticed an old friend among the demonstrators, Ursula Halligan, a well-known TV news presenter in Ireland. Halligan famously came out as a lesbian in 2015 during the Irish marriage equality referendum.

The bishops embraced Halligan and inquired about the group. Halligan invited them to meet the protestors. Both men greeted the protestors warmly and took their literature.

Bolstered by the bishops' warmth, the group continued its chant, attracting the attention of two other prelates. However, as those men approached the group, members of the Italian police, both uniformed and in plainclothes, swept in and broke up the protest.

The scene quickly became chaotic and heated. Police demanded the passports of every protestor and physically grabbed the arm of Kate McElwee, executive director of the Women's Ordination Conference. Fellow protestors surrounded McElwee, demanding that the police officer release her from his grip.

When the officer continued to demand McElwee's passport, the other protestors began surrendering their passports to him.

Another officer shouted in the face of a woman protester from the Czech Republic, at one point demanding that she come with him to a cordoned off area, about 50 feet away from the site of the witness. They returned within 10 minutes, and the woman was released.

Within several minutes, a police van filled with 10 additional officers pulled up. Wearing berets and bulletproof vests, they appeared ready for battle. As protestors were interrogated during the tense scene, many bishops and cardinals could be seen walking by, remaining aloof to the situation.

Police demanded the passports of more than a dozen protestors and held them for at least 20 minutes until everyone had been question.

As police did their questioning, other protestors held hands and began to pray the rosary aloud. Behind them loomed two mounted policemen, who had also been called on to the scene.

After detaining the protestors for nearly a half hour, all had their passports returned to them and were released.

The scene was reminiscent of a similar incident, back in June 2016, when members of the Women's Ordination Conference and Women's Ordination Worldwide, were escorted by the Roman police and its special terrorism unit after a planned and permitted protest at the Castel Sant'Angelo, nearly half a mile from St. Peter's Square.

*This article originally misstated that the bishops were exiting the meeting.

[Jamie Manson is NCR's book review editor and writes the column Grace at the Margins.]