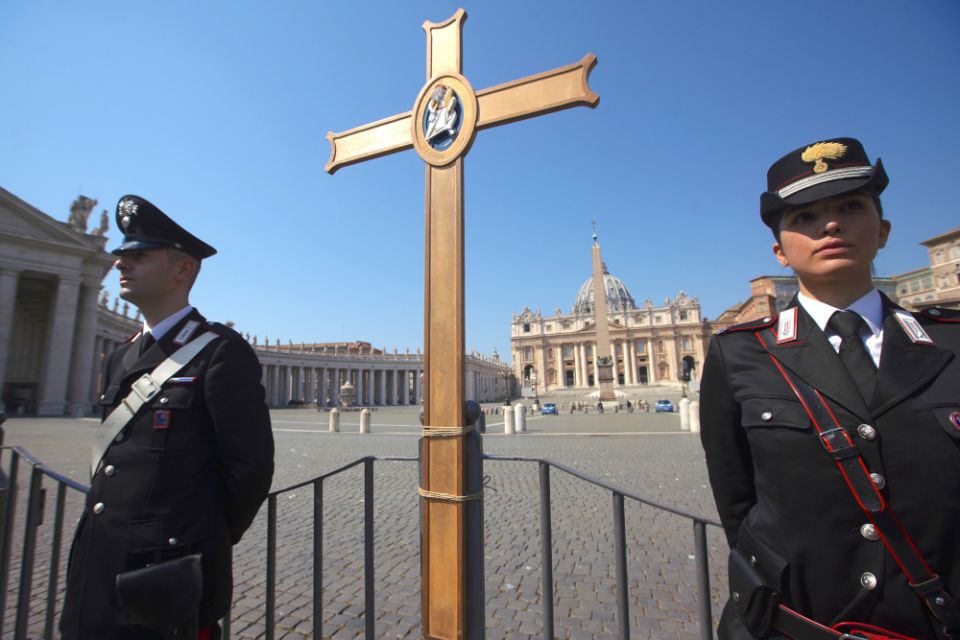 Italian Carabinieri stand by a cross, donated to them during the Holy Year of 2016, placed by an empty St. Peter's Square in homage to Pope Francis while the pope celebrated an Easter Mass inside an empty St. Peter's Basilica, at the Vatican, April 12. (AP/Andrew Medichini)

New York — Christians around the world celebrated Easter Sunday isolated in their homes by the coronavirus while pastors preached the faith's joyous news of Christ's resurrection to empty pews.

In Britain, Prime Minister Boris Johnson, the first major world leader to test positive for the virus, was released from the hospital after a week, though he is not immediately returning to work. He thanked two nurses at his London hospital who stood by his bedside for 48 hours "when things could have gone either way."

The strangeness of this Easter was evident at the Vatican. St. Peter's Square, where tens of thousands would normally gather to hear Pope Francis, was empty of crowds, ringed by police barricades. Francis celebrated Easter Mass inside the largely vacant basilica.

In his address, the pope called for global solidarity to confront the "epochal challenge" of the pandemic. He urged political leaders to give hope and opportunity to the millions laid off work.

Read this next: Pope calls for a 'contagion' of Easter hope, peace, care for poor

Worldwide, families who normally would attend church in their Easter best and later gather for festive meals instead were hunkered down at home. Police checkpoints in Europe and outside closed churches elsewhere left the faithful with few worship options other than watching services online or on TV.

In the United States, some pastors vowed to proceed with in-person services despite state or local bans on large gatherings. In Louisville, Kentucky, On Fire Christian Church received the go-ahead from a federal judge to hold a drive-in Easter service despite the mayor's effort to stop it.

President Donald Trump and his wife, Melania, planned to watch an online service led by the Rev. Robert Jeffress of the Southern Baptist megachurch First Baptist Dallas. The pastor, a staunch ally of the president, mentioned Trump in his remarks,

"We are going to get through this crisis with your continued strong leadership and the power of God," Jeffress said.

In their own Easter message, the Trumps paid tribute to the medical professionals, first responders and other essential workers striving to combat the pandemic.

In New York City, now its epicenter in the U.S., members of churches from across the city sang "Christ the Lord is Risen Today" from their balconies and windows.

"Even if you didn't hear everyone, God heard everyone," said Kathy Keller, of Reedemer Presbyterian Church, who helped organize the event online.

In Europe, countries used roadblocks, fines and other tactics to keep people from traveling over an Easter weekend with beautiful spring weather. The Italian government said weekend police patrols resulted in more than 12,500 people being sanctioned and 150 facing criminal charges for allegedly violating lockdown measures.

As hard-hit countries like Italy and Spain see reduced daily virus infections and deaths, economic pressures are mounting to loosen the tight restrictions on daily life.

Southern Europe and the United States, whose death toll of over 20,600 is now the world's highest, have been the recent focal points of the pandemic. But coronavirus hot spots have been shifting constantly and new concerns are rising in Japan, Turkey and Britain, where the death toll surpassed 10,000.

Uncertainties loomed about the months ahead, with a top European Union official suggesting people hold off on making any summer vacation plans.

Some European nations started tentative moves to ease their shutdowns. Spain, which on Sunday reported its lowest daily growth in infections in three weeks, will allow workers in some nonessential industries to return to factories and construction sites Monday.

Churches in Spain rang their bells at noon to echo the pope's message of comfort to the victims of the pandemic and to offer hope.

Italian Premier Giuseppe Conte thanked people for their sacrifices and acknowledged that many families are celebrating Easter with empty places at the table. "Together, we will make it," Conte he said.

For most people, the coronavirus causes mild or moderate symptoms, such as fever and cough. But for others, especially older people and the infirm, it can cause severe symptoms and lead to death.

More than 1.79 million infections have been reported and 110,000 people have died worldwide, according to Johns Hopkins University. The U.S. has the highest numbers, with over 530,000 confirmed cases. The figures certainly understate the true size and toll of the pandemic, due to limited testing, uneven counting of the dead and some governments' desire to play down the extent of outbreaks.

While some nations think about a pandemic exit strategy, others are dealing with alarming rises in infections or deaths.

Turkey took many by surprise Friday evening by imposing a 48-hour curfew in 31 cities, including Ankara and Istanbul, prompting a rush to grocery stores. The country had previously imposed a curfew on those under 20 and over 65, exempting most of the workforce in its beleaguered economy.

In Britain, where the death toll passed the 10,000 mark, Johnson paid an emotional tribute to the National Health Service workers who treated him ahead of his release Sunday from St. Thomas' Hospital in London. He spent a week in the hospital, including three nights in the intensive care unit.

"I can't thank them enough. I owe them my life," said Johnson, 55, in his first public statement since he was moved from intensive care Thursday. His office said he will continue his recovery at Chequers, the prime minister's country home. 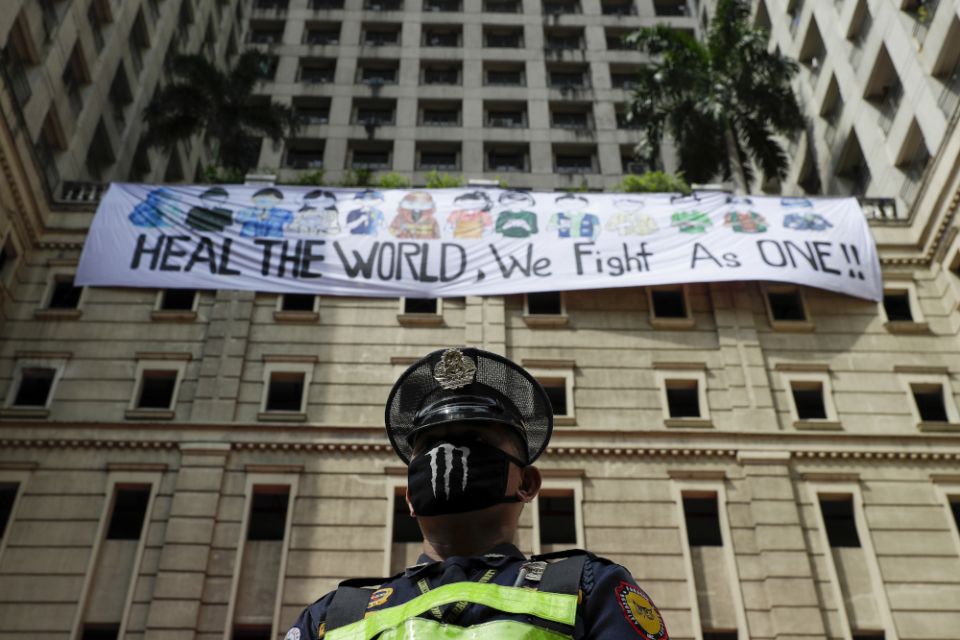 A security guard stands in front of a banner as residents clap and sing from their windows to pay tribute to health workers, essential personnel and security forces during an enhanced community quarantine to prevent the spread of the new coronavirus in Manila, Philippines, April 12. (AP/Aaron Favila)

In the United States, about half the deaths are in the New York metropolitan area, but hospitalizations are slowing in the state and other indicators suggest that lockdowns and social distancing are "flattening the curve" of infections.

Dr. Anthony Fauci, the top U.S. infectious disease expert, said the economy in parts of the country could be allowed to reopen as early as next month.

While he said there's no light switch that will be clicked to turn everything back, he told CNN's "State of the Union" that "rolling re-entry" will be required based on the status of the pandemic in various parts of the country.

New York state reported 783 more deaths, for a total of over 8,600. Gov. Andrew Cuomo said the daily number of deaths is stabilizing, "but stabilizing at a horrific rate."

In the Midwest, pockets of contagion have alarmed local leaders and led to stricter enforcement.

Nearly 300 inmates at the Cook County Jail in Chicago have tested positive and two have died. The county has set up a temporary morgue that can take more than 2,000 bodies.

People | Amid virus, world's Christians mark an Easter like no other

Words to encourage and guide, wherever you find yourself during this pandemic

The Christmas story turns on the Incarnation