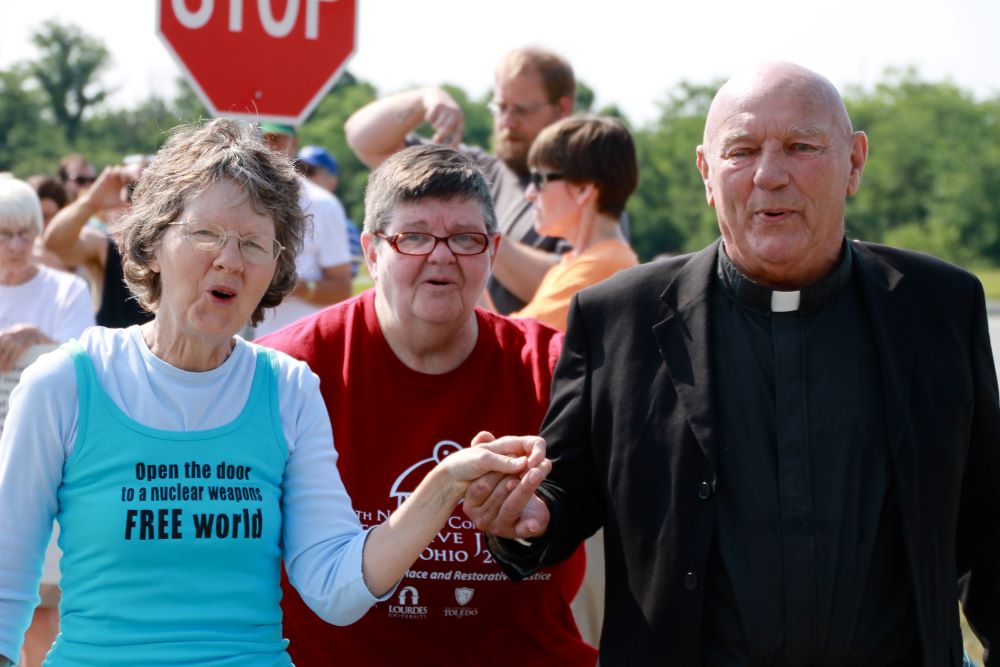 Oblate Fr. Carl Kabat, one of the 1980 Plowshares Eight and a relentless anti-nuclear weapons protester whose four decades of civil disobedience drew bitter critics and many admirers, died Aug. 4 at age 88.

Kabat did it his way, never fitting any preordained mode. As a priest, he lived simply, attended to the poor, and preached the moral and physical perils of nuclear destruction. In the process he upset many bishops, who banned him from their dioceses. For his part, he seemingly didn't care. He largely went his own way with the Oblate leadership cutting him lots of slack. Through difficult times, the Oblate mission — "to preach the gospel to the poor" — offered direction on the road ahead.

U.S. Oblate Provincial Fr. Louis Studer is the latest Oblate provincial to have been responsible for Kabat's priestly ministry. "I've come to see him in a much more positive light as I got older," Studer told NCR. "His dedication has been unparalleled to anyone I've ever known. He's always lived simply and close to the poor."

"He was just way ahead of his time, trying to draw our attention to the dangers of nuclear war," said Studer. "You only have to think about the talk of nuclear weapons in Ukraine today to know how on the mark Carl has been." 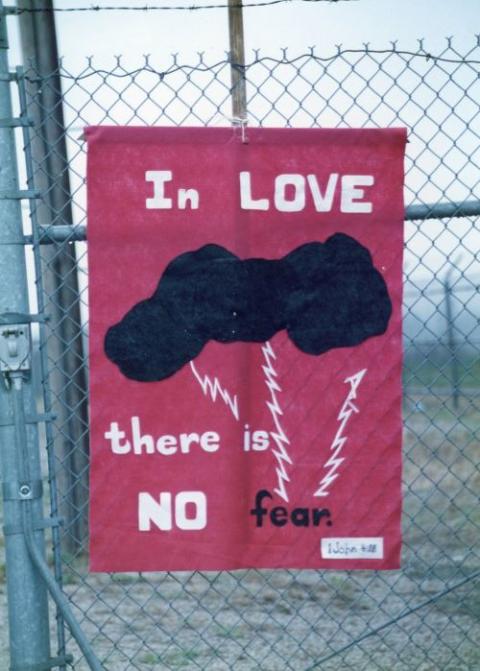 A banner hung by Fr. Carl Kabat of the Missionary Oblates of Mary Immaculate and fellow protester Carol Carson is seen on a fence surrounding a nuclear missile silo in Missouri during a Good Friday protest April 17, 1992. (NCR file photo)

Kabat was a passionate and relentless crusader against injustices of all stripes. He viewed militarism as a grave abuse of resources and as antithetical to the Gospels; any church complicity, a betrayal. His life's work was driven by the belief that humanity is marching blindly toward nuclear Armageddon.

Most Americans don't know or understand the issues, Kabat had lamented. How are they to know about these issues — about church teachings — if their local bishops and politicians don't speak about them?

He once handed a reporter a flyer he carried in his pocket. Written on it were words from a Second Vatican Council document, Gaudiem et Spes: "Any act of war aimed indiscriminately at the destruction of entire cities of extensive areas along with their population is a crime against God and man himself. It merits unequivocal and unhesitating condemnation."

"That's Vatican II," Kabat said. "Why don't they [bishops, cardinals and politicians] teach that? … Because we're the biggest purveyor of nuclear weapons in the world."

Kabat spent nearly two decades behind bars as a result of his protests, often involving civil disobedience. Both his parents died while he was in prison. Once released it would often be only months, or even weeks, before he was plotting another act of civil disobedience.

He had a seemingly nonchalant attitude about prison life. He once told a reporter, with a laugh, "I have to get back to jail so I can get back to reading and writing." He told another: "I'm freer here than on the outside." 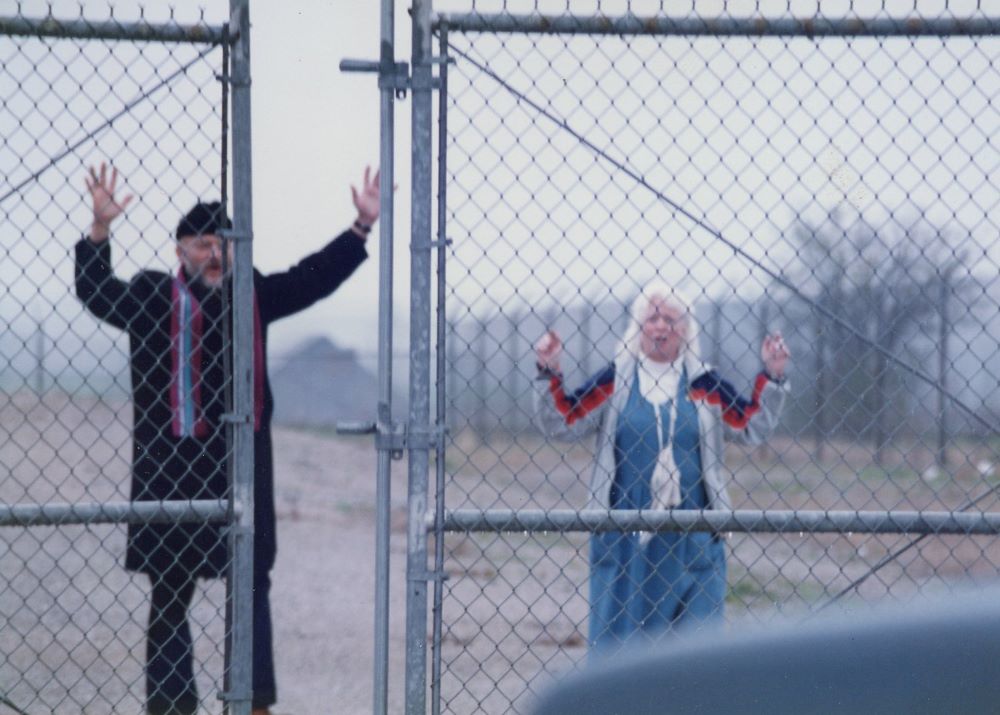 His basic attire — sweats, sneakers, khakis, and shorts — matched his simple, if also eccentric, lifestyle. He was an itinerant protester, not unlike some Old Testament figures. However, he seemed motivated by New Testament teachings. He preached the Beatitudes through his daily actions, often working out of a Catholic Worker house. A Catholic Worker house in St. Louis has been named after him.

"Carl had a really playful and mischievous spirit. Sometimes he would tease, especially if he could discover someone's soft spot," said longtime St. Louis-area Catholic Worker Chrissy Kirchhoefer. "He seemed to repel some and bring some much closer to him. He was very thoughtful, inquisitive and loved learning things deeply."

Kabat called himself "a fool for Christ" — a term found in 1 Corinthians 4:10: "We are fools for Christ, but you are so wise in Christ! We are weak, but you are strong! You are honored, we are dishonored!"

He was guided by an inner spirit that cared little what others thought of him. He could be amusing and cultivated levity. To make the point, he often wore a clown costume during his protests, his response to the madness that he saw around him.

"Justice is serious. And nuclear weapons are insane. … My principle is to just do what I can do, and then sing and dance," he once explained.

His lifestyle took a toll. While in prison he developed complications following a lens implant. Prison staff was dismissive, leading to loss of sight in his right eye.

Kabat's response was characteristically lighthearted: "I figure I can see with my left eye, better than 20/20," he told a reporter.

Asked how he would describe Kabat's personality, Studer said: "He was an 'in your face' kind of person." He said Kabat could be direct and abrupt, "but for those who took the time to listen to him, they found a gentleness at the core."

Kabat was born on a farm in the small town of Scheller, Illinois, in 1933. He grew up on his parent's farm, the third of five children: Leonard, Paul, Carl, Bob and MaryAnn.

"Paul was always going to be the priest and Carl was to become a doctor, according to the plan of our parents," Kabat's sister, MaryAnn Radake, told NCR. She said he enrolled at the University of Illinois, but returned home at Christmas, miserable. "Medicine was not for him." Instead, Carl let his brother know he wanted to follow in his footsteps and enter the Oblates, which Paul arranged.

The Oblates had a strong presence in the area. It had a seminary 155 miles away in Belleview. Kabat was eventually ordained in 1959 in Pass Christian, Mississippi, one year after Paul.

The Oblates first sent him to the Philippines. However, it was Kabat's second assignment, in Brazil, that had the greatest impact on his life, Radake said. There he encountered liberation theology and worked with poor young men, helping to build their self-esteem and Christian consciences. This did not go down well with local authorities who viewed Kabat as a dangerous threat. The Oblates removed him from Brazil for his own safety.

Back in the states, he spent several years translating into English the works of liberation theologian José Comblin. This was a period, after the Second Vatican Council, when priests in both South and North America were waking not just to poverty, but rather to the causes of poverty. It was a radicalizing time in Kabat's life. He would never see life in the U.S. the same.

Radake recalls that her father, as part of a farm program, was being paid not to grow several crops. This angered and upset Kabat, who saw the program as an attack on the poor of the world. "After Brazil, nothing would ever be the same," she said. Kabat felt the cost of military weapons was taking food from the poor. He joined Pax Christi USA and Amnesty International.

It was during this period Kabat discovered and found himself being drawn to other Catholics who shared his views. Kabat visited and then joined Jonah House in Baltimore, a faith-based political collective founded by former Josephite priest Philip Berrigan and his wife, Liz McAlister, who'd been a Sacred Heart of Mary sister. (They left their orders to marry). 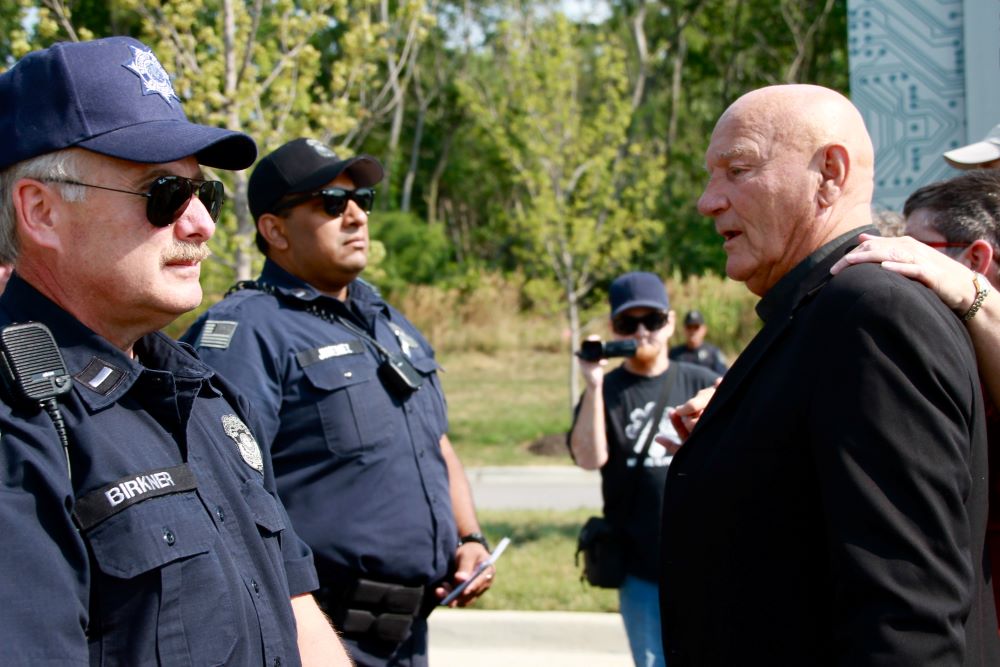 Fr. Carl Kabat of the Missionary Oblates of Mary Immaculate protests at the National Nuclear Security Administration’s Kansas City Plant on July 13, 2013, in Kansas City, Missouri. Kabat's provincial superior at the time, Fr. Bill Antone, joined the protest. The priests were among 23 people were arrested that day and later released. (NCR photo/Kate Simmons)

He joined the Berrigans on multiple protest actions, throwing blood onto the steps of the Pentagon. On Sept. 9, 1980, he was one of eight who broke into the General Electric nuclear weapons manufacturing plant in King of Prussia, Pennsylvania, battering missile nose cones with hammers and sprinkling blood on classified documents.

That action led to others and soon an anti-nuclear weapons protest movement was growing, called the Plowshares movement. Through four decades, Plowshares protests have been nonviolent and highlighted by symbols, like pouring blood or using hammers. The term "plowshares" comes from Isaiah 2:4: "They will beat swords into plowshares."

The Plowshares Eight were found guilty, but appeals lasted more than a decade before the group was paroled, in 1990, for up to 23 1/2 months in consideration of time served in prison.

It was during the summer of 1984 I had my first – and most memorable — Kabat encounter. Driving an old clunker, he turned up at my Roeland Park, Kansas, home with the outer shell of a nuclear weapon nose cone hanging out of the trunk. With the help of a friend, he lugged it into the house and placed it on our living room floor. He said he had pulled it from a trash heap outside a nuclear weapons plant. The sight of that metal cone made a lifelong impression on our young children, ages 11 to 6 at the time.

Later that year, in November 1984, Kabat was one of four protesters who cut through a chained fence and broke into the N5 Missile silo 30 miles East of Kansas City, Missouri. Along with Kabat on this protest was his older brother, Paul, Larry Cloud-Morgan (Chief White Feather) and Helen Woodson. They had entered the silo grounds and jackhammered a slab of concrete before being arrested, while sitting in a circle, singing, and holding hands. "To beat the sword into a plowshare, you need a hammer. Well, jackhammer is just a little bigger hammer," Kabat explained at the time. For that protest, Kabat received an 18-year prison sentence; he served 10.

He returned to Kansas City to engage in a series of civil disobedience actions, in 2011, 2012, 2013 and 2014. During his 2013 protest, Kabat's then-provincial, Fr. Bill Antone, joined him in trespassing onto the grounds of the Kansas City nuclear weapons plant, saying he did it to protest nuclear weapons, "but mostly to support Kabat."

"I'm here to be in solidarity with Carl and what he's done and, in [crossing the line], to show that there is an affirmation and a support and understanding that what he's done is valid," Antone said at the time, adding that Kabat had a "heroic persistence" and has been "a real witness to our faith [and is] something that we as oblates can be proud of."

Kabat often chose July 4 for his protests. He called the holiday "Interdependence Day," in honor of the interconnectedness of all of nature. During his 2014 action, he took blood from several baby bottles and sprayed it onto a large sign in front of the facility. Then he sat and waited to be arrested.

Kabat had made his life goal known to many: to live a full and joyful life. It seems he has done just that. He told his sister, MaryAnn, that he wants the following words inscribed on his tombstone: "He really lived." If there's room, she said, she would try to make it happen.

A version of this story appeared in the Aug 19-Sept 1, 2022 print issue under the headline: Carl Kabat, anti-nuclear weapons protester, dies.