Catholic Church should focus on getting 'nones' back, Bishop Barron says 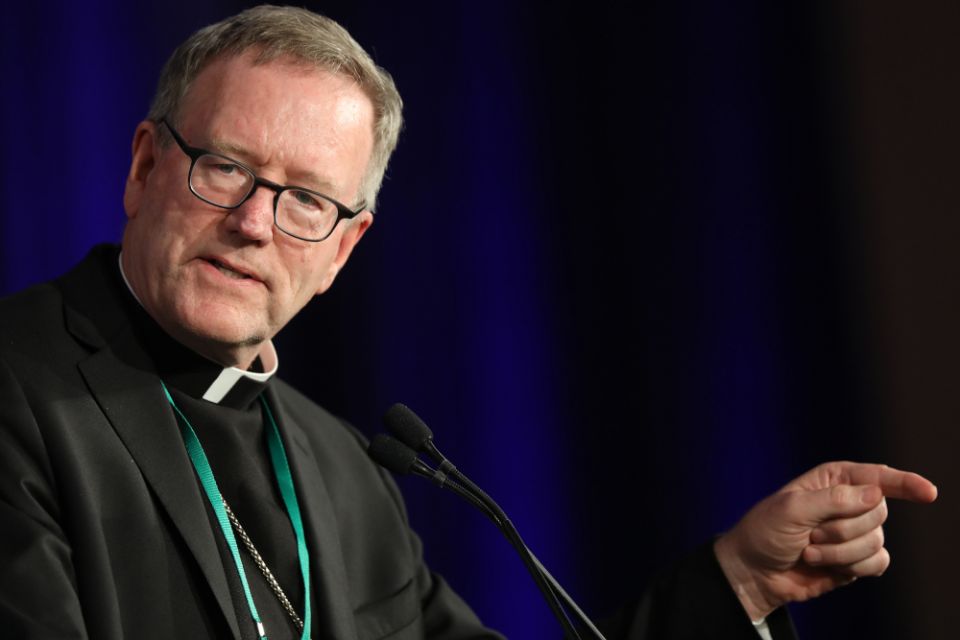 Baltimore — Although the U.S. bishops' spring assembly in Baltimore was mostly devoted to responding to the sexual abuse crisis in the church, the bishops also considered something described as the second-most important issue currently facing U.S. church leaders: How to get religiously unaffiliated, or "nones," particularly young people, back to the Catholic Church.

This is a top priority for our church, said Auxiliary Bishop Robert Barron of Los Angeles, chairman of the bishops' Committee on Evangelization and Catechesis, who is known for his website, "Word on Fire," and for hosting the documentary series "Catholicism."

In a June 11 presentation, the bishop said a group of experts who've examined why young people are leaving the faith in increasing numbers recently spoke with his committee about this and will share their findings during a lunch presentation at the bishops' fall assembly in Baltimore.

"How many are leaving? The short answer is: a lot," the bishop said, noting the sobering statistic he said many in the room probably were aware of — that 50% of Catholics 30 years old and younger have left the church.

"Half the kids that we baptized and confirmed in the last 30 years are now ex-Catholics or unaffiliated," he said, and "one out of six millennials in the U.S. is now a former Catholic."

Another statistic that particularly affects him is this: "For every one person joining our church today, 6.45 are leaving" and most are leaving at young ages, primarily before age 23. The median age of those who leave is 13.

"Where are they going?" he asked, and in response to his own question, he again gave a short answer: They're "becoming nones" although some, in much smaller percentages, join other mainstream religions or evangelical churches.

Barron said church leaders don't need to speculate about why people are leaving because there are plenty of studies and surveys that answer this. The No. 1 reason, he said, is that they simply no longer believe the church's teachings, primarily its doctrinal beliefs.

In his opinion, he said, this is "a bitter fruit of the dumbing-down of our faith" as it has been presented in catechesis and apologetics.

Other reasons he said young people are leaving have to do with relativism, science and the church's teachings on sexuality.

The bishop's hope, in this environment, is that the young, religiously unaffiliated can still be reached because as he put it, most have drifted away versus storming away from the faith. "We're not up against a fierce opponent at every turn," he said, adding: "Most are ambivalent to religion rather than hostile to it."

He also mentioned what he called the "Jordan Peterson phenomenon," which he prefaced by saying, "Please don't take this as a one-sided endorsement" of the Canadian psychology professor and author who is popular on social media.

"He speaks at a very high level about serious things and big ideas," Barron said, noting Peterson's current YouTube talks on the Bible. He said the fact that millions of young people, young men in particular, are watching this speaker talk about "our book, the Bible" is worth reflecting on and is a sign of hope.

Read this next: Barron's idea of evangelization to 'nones' misses the mark

Not everyone on Catholic social media agreed with this point. Some questioned how the bishop could present a speaker who has stirred controversy with his complaints against political correctness as a model, while others called him an example of someone who takes on the big questions.

Barron was asked in a June 12 news conference how he would respond to critics of his Peterson reference. He said he does not fully agree with everything Peterson says, but he thinks that what he is doing — "speaking about big ideas" — and the huge fan base that follows him can't be ignored.

"We should be able to speak about the Bible in a way that people would want to hear" is the message he said he was trying to get across to the bishops.

The other examples Barron pointed to as signs of hope were Catholic campus missionary groups, like the Fellowship of Catholic University Students, or FOCUS, that are "getting traction with young people."

He also said the amount of engagement about social media in religion is a good thing, even those angry about religion. He said he was recently part of an "AMA" (Ask Me Anything) feature on Reddit, an internet news aggregator, where he said he was a Catholic bishop who loved to talk with atheists and ended up with more than 12,000 questions in under an hour.

In the discussion period after his Baltimore presentation, several bishops agreed with his analysis and one bishop asked for clarification and spelling of Reddit.

Bishop Christopher Coyne of Burlington, Vermont, said it was "wonderful that we're talking about this issue and I think we need to make it front and center at all of our gatherings." He said he hoped the discussion on the topic at the bishops' fall meeting also would examine cultural and sociological issues influencing young people to leave the church.

For example, he said the "paradigm of parish membership" does not work for millennials since many of them move so frequently, and this also applies to society in general where so many no longer join communities which leads to isolation and loneliness.

In response, Barron said young people who are leaving can be reached in a broader sense through social media.

"We have to go get them and we do have the means to do that through social media — with all of its negativity."

He said the paradox is that social media can also lead to further isolation because people are connected only though their screens, but at this point in time, he said using it as "an evangelical tool is required now, given the fact that people aren't going to come to our institutions."

People | Catholic Church should focus on getting 'nones' back, Bishop Barron says

Roll up your sleeves, get ready to get dirty, pope tells new bishops

Australian states to have priests report abuse disclosed in confession