One in Florianópolis hasn't been broken since 1766 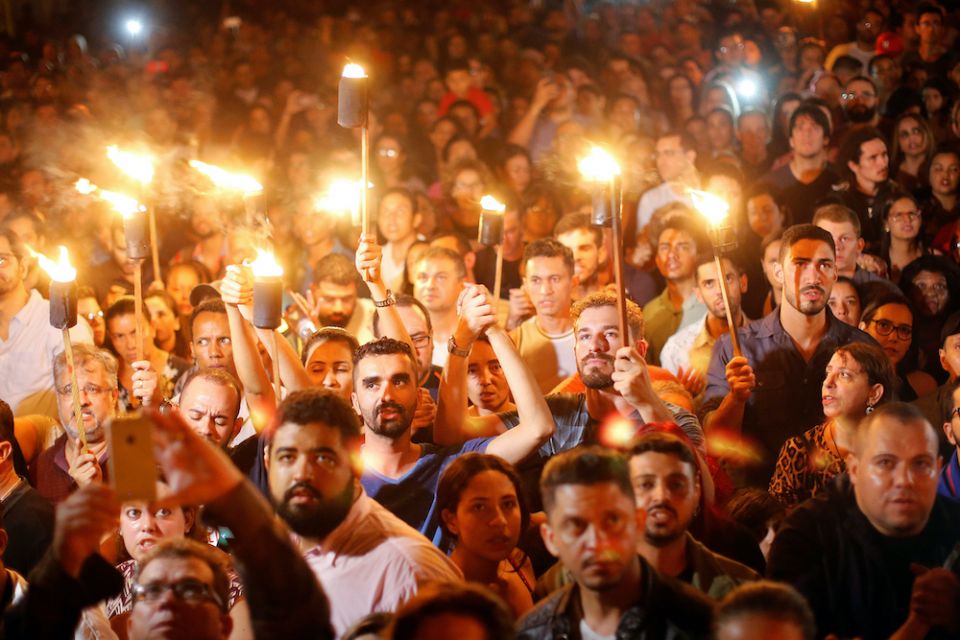 Several processions and festivities in honor of Catholic saints in Brazil had to be cancelled this year due to the coronavirus pandemic, an unprecedented interruption of centuries-old traditions that impacted thousands of participants. Most communities, however, understood this is not the time for great agglomerations and are waiting for a better moment to resume their activities.

In colonial (1500-1808) and imperial times (until 1889), the country had a rather insufficient number of priests, and most rural communities developed their own popular ways of keeping the faith. Devotion to saints played an essential role in that process. The Iberian tradition of organizing processions in honor of biblical characters and saints flourished in all regions.

"The statue was being taken south. After three frustrated attempts to leave the region, the captain decided it was God's will that the statue remained in Florianópolis," explained Rogério Laureano, a member of the Brotherhood of Our Lord of the Stations, which was created one year later in order to protect the statue.

Since then, a great procession takes place every year in the city, which is located in a region that received a massive influx of Azorean immigrants. The event happens at the fifth Sunday of Lent.

"The day before, Saturday, there's the carrier's procession, in which all objects that will be used in the procession are taken from the people's houses to the church," explained Laureano. The procession itself begins on Sunday afternoon.

"The statue is carried through the streets to our chapel, while a singer, representing Veronica, chants the story of the via crucis."

In the past few years, about 30,000 people attended the Saturday procession — and two times more the procession itself.

Since 1766, the event has never been cancelled. "But this year all public religious gatherings are forbidden. People understood the seriousness of the situation. We oriented them to pray and reflect at home," Laureano said. So far, no new date had been set for the procession. 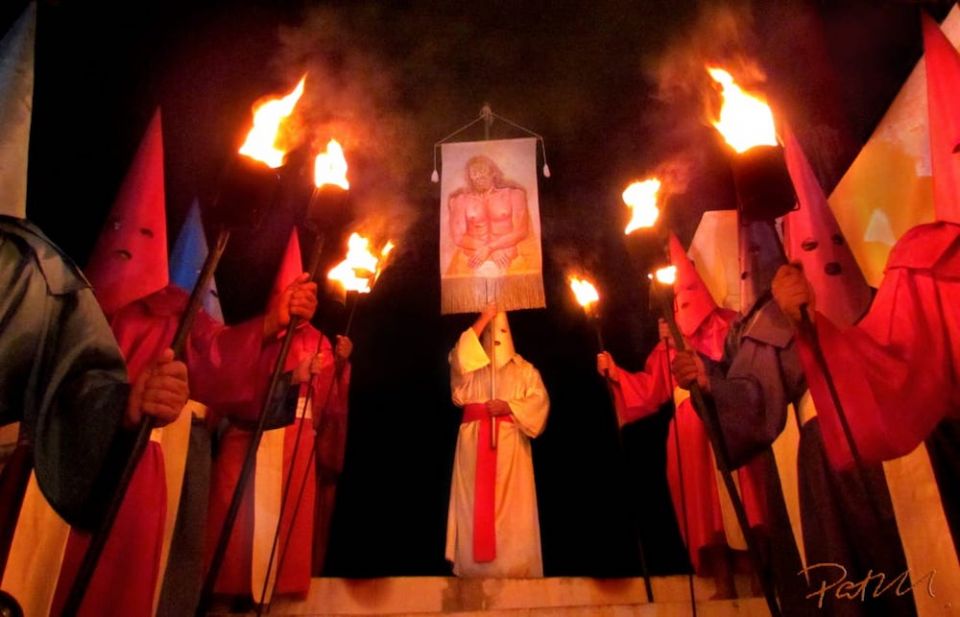 Procissão do Fogaréu, the Procession of Torches, is a tradition since 1745 that recreates the last steps of Jesus before being arrested. Forty members of the city of Goiás, Brazil, dress as executioners and march through the streets. (Patrícia Mousinho)

Another 18th-century tradition is the Procissão do Fogaréu (cresset, or torch, procession), organized in the city of Goiás since 1745.

"The idea is to reenact the last steps of Christ before his imprisonment. This tradition was brought from the Iberian Peninsula by a priest in the 18th century," Rodrigo Passarus, president of the association that organizes the procession, told NCR.

Forty members of the community dress up as Jesus' executioners, wearing big conical hoods and colorful robes and carrying torches. "It's the most important part of our tradition and collective memory. We're devastated with the cancellation," Passarus said.

He said the association tried hard to somehow keep the event, but in the end everybody concluded that the adequate Christian attitude would be to suspend the procession. "We made all materials concerning past processions, such as videos and pictures, available on the internet," he explained. These will be rolled out as Holy Week progresses. The first, a video of a past procession will be available on April 8.

The event became an important cultural attraction in the small historic city, which used to be the capital of Goiás State, and draws hundreds of tourists every year. "We've orienting people to reflect on Lent's deep meaning during these days of quarantine," Passarus said.

The strong community participation that constitutes the nucleus of such manifestations has become completely impossible since the Brazilian authorities imposed several restrictions on agglomerations and public events in order to avoid the further spreading of coronavirus. As of March 31, there were at least 4,715 confirmed cases and 168 deaths in the South American country. (Click here for updates.) 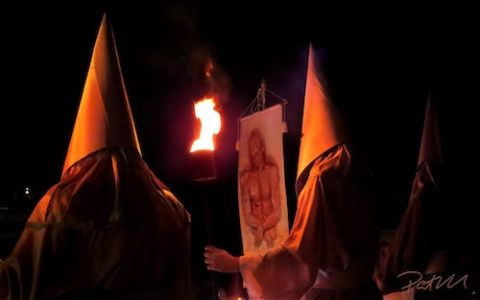 "At first, we wanted to proceed with the organization of the festivity of St. Joseph [March 19], a very ancient tradition in our community. But then the government ordered the closure of our local school and suspended all public religious gatherings, so we had to give up," Maria Vanilda Barroso, from the small rural community of Mandassaia, in the city of Leme do Prado, Minas Gerais State, told NCR.

Barroso, who volunteers at the local parish, was this year's festivity organizer. "We had to interrupt the novena. I wished we could have concluded at least the religious part of the feast," she said.

All ornaments and special garments were ready for the procession, in which the story of St. Joseph and Jesus in told in six acts. "If the situation gets better, we can resume the festivity on May 1, which is Saint Joseph the Worker's day," Barroso said. 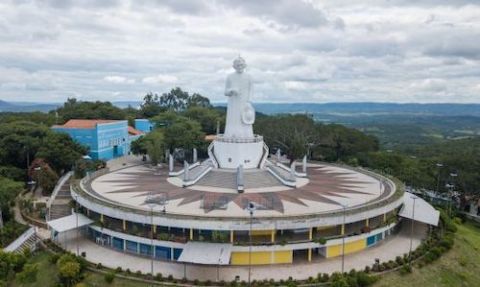 In the northeastern part of Brazil, especially in countryside regions, the Iberian Catholic traditions remain extraordinarily vigorous and processions attract thousands of people every year to cities like Juazeiro do Norte, in Ceará State.

The city was the base of Fr. Cícero Romão Batista, popularly known as Padre Cícero or Padim Ciço (1844-1934), a charismatic local leader who enjoys since his death the status of a great popular saint, although the Vatican has never officially recognized his sainthood.

"In March, the city celebrates his birthday and also the anniversary of his ordination as a priest," Renato Casimiro, a university professor and Padre Cícero's biographer, told NCR.

Not only the dates connected to Padre Cícero's life are commemorated, but also the devotions he introduced in the region, such as the cult of Our Lady of Sorrows and of the Sacred Heart.

"We have 12 processions over the year. Some of the events attract three hundred thousand people to Juazeiro do Norte," Casimiro added.

People seize such opportunities to pay promises, what is sometimes made with great physical effort. "Some people travel 300 miles on foot to get to Juazeiro do Norte and thank Padre Cícero for a received grace," Casimiro said.

According to Casimiro, March is a secondary month of festivities in the region and draws fewer people from other cities. "But there's always the risk that some people ignore the quarantine and come to the city anyway. It's something very strong for many people. It's not possible to control something like that," he concluded.

When I fall, the Stations of the Cross help me to get back up, walk on

The way of the cross