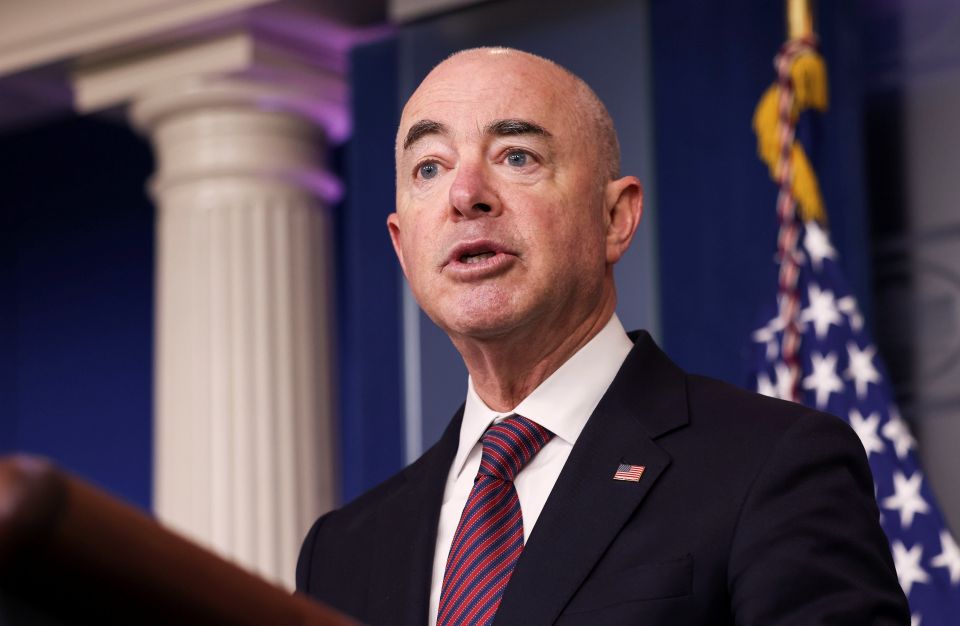 U.S. Secretary of Homeland Security Alejandro Mayorkas speaks about an investigation into the treatment of Haitian migrants on the U.S.-Mexican border during the daily briefing at the White House in Washington Sept. 24, 2021. (CNS photo/Evelyn Hockstein, Reuters)

Washington — Homeland Security Secretary Alejandro Mayorkas said current conditions in Haiti allowed for the return of some of the estimated 14,000 Haitian migrants who crossed earlier in September from Mexico into Del Rio, Texas.

He was the keynote speaker Sept. 27 during the Catholic Legal Immigration Network's 18th annual law and policy conference, delivering his address in a Q-and-A format — one that Mayorkas himself had suggested.

Some of the Haitians had traveled from as far south as Chile when they arrived in Del Rio. Some of them left Haiti after the 2010 earthquake that devastated the nation.

"They should not take the perilous journey here for the reasons that were so compelling the last few weeks," Mayorkas said, but added that the number of those released in this country far outstrips the number sent back to Haiti on planes.

He talked about the U.S. government's declaration in May of a new Temporary Protected Status designation for Haitians already in the United States, saying it was warranted.

At the time, Haiti was going through a political crisis and social unrest in addition to the pandemic. Then came the July 7 assassination of Haiti's president, Jovenel Moïse, and a magnitude 7.2 earthquake struck Haiti's southwestern peninsula early Aug. 14.

"We were uncertain whether stability would be regained" such that TPS would be sustained "or hold it in abeyance and determine how the country conditions would settle," Mayorkas said before an online audience of more than 500.

TPS has been designated for Haitians for previous periods; the last TPS designation ended in July 2019.

The new TPS designation extends for 18 months, from Aug. 3 through Feb. 3, 2023, and covers only Haitians residing in the United States as of May 21, 2021, who also meet other requirements.

Regarding the Haitians at Del Rio, "we felt it possible to return people to Haiti," Mayorkas said.

U.S. officials expected them to be resettled safely with the help of U.S. Agency for International Development funding and other humanitarian resources.

The secretary also discussed Title 42, a provision of U.S. public health law activated by the Trump administration to expel migrants at the border, with the exception of minors, over COVID-19 concerns. The Biden administration has kept the provision in place, despite protests.

Under Title 42, hundreds of thousands of immigrants who have entered the country illegally have been expelled since the start of the coronavirus pandemic in March 2020. The clause, which can be invoked by the surgeon general, cites the immigrant coming from a country where a communicable disease has been detected.

If the Title 42 provision were lifted by the federal Centers for Disease Control and Prevention, "that would mean a regaining of footing regionally and therefore hopefully, a diminution of the numbers of those seeing to migrate," Mayorkas said. "That would be my hope."

A court order also could lift it, he acknowledged, in which case DHS would shift gears.

Immigrants hoping to enter the United States without being detected by authorities don't go to the ports of entry on the U.S.-Mexico border, according to Mayorkas. Regardless of entry point, he said, they are more likely than not to carry the virus, which can "facilitate a significant spread of the disease."

"When one is speaking of 7,000-7,500 people every day being encountered at the border," he added, "the system is not built for that in a COVID environment where isolation is required."

Mayorkas said, "We are in an unprecedented time of a pandemic. It is not regular order, from an operational perspective, when we have unaccompanied children arriving in the numbers that we do have, and the delta variant causes an operational change."

On a positive note, Mayorkas said, the resettlement process of thousands of refugees from Afghanistan airlifted out of that country by the United States in August "has been tremendously successful thus far."

Mayorkas lamented the decision of the Senate parliamentarian that an immigration overhaul could not be part of the Democrats' $3.5 trillion budget bill which they hope to pass under the reconciliation process — meaning it could be passed with a simple majority, not the 60 votes usually needed.

But, he said, "that certainly was the parliamentarian's ruling for that question that was presented squarely to her. The drive for (immigration) legislation is unrelenting, and correctly so. It is so imperative."

CLINIC executive director Anna Gallagher noted at the start of the conference that Sept. 26 was the Catholic Church's observance of the World Day of Migrants and Refugees.

Some consider immigrants to be "other" or "less than," Gallagher said. "They are not. They are the same flesh. We are not better, smarter or holier than they."

As for welcoming the stranger among us, she added, "we must make this a reality."

Editorial: Impeachment inquiry against Trump is well worth the effort

Joseph Sciame works hard to help others, appreciates his many blessings

Against all odds: from slavery to priesthood to sainthood