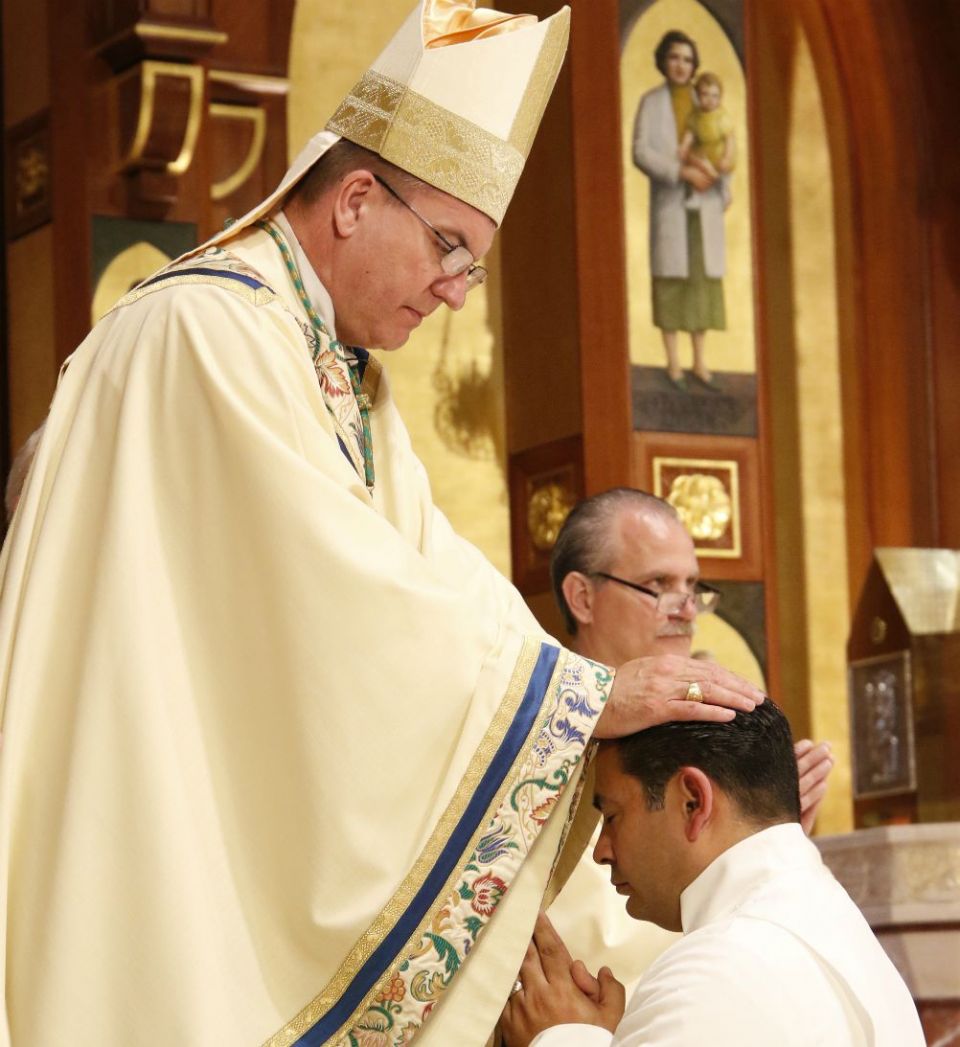 A call from a leader of an Irish priests' organization that dioceses abstain from ordaining new permanent deacons received a frosty response on this side of the pond from deacons and priest leaders contacted by NCR.

The proposal was made by Fr. Roy Donovan of the Association of Catholic Priests in Ireland. He said that ordaining deacons adds "another male clerical layer to ministry" and is a way of "extending patriarchy" in a Catholic nation feeling the impact of a shortage of new priests.

Donovan argued in a statement this summer that the church wait on ordaining deacons until a commission established by Pope Francis to study the role of women in the diaconate releases its findings.

But Donovan's idea is unfair to deacons already on the path to ordination and misconstrues their role, said American clerics and a Canadian deacon.

He "misunderstands the purpose of the permanent diaconate," said Thomas DuBois, a deacon based in Columbus, Ohio, who is executive director of the National Association of Diaconate Directors. Bishops who have a diaconate program "are not just training clerics," he said.

The role of the deacons is not that of a mini-priest, available to preside at weddings and baptisms while preaching at Mass. The ancient order, which has its roots in the early church, is devoted to meeting the needs of widows, orphans and the poor of the Christian community, DuBois emphasized.

DuBois rejected the idea that deacons can serve as a replacement for the decline in the number of priests, either in the United States or Ireland. The diaconate was reintroduced into the church after Vatican II. There are now about 45,000 permanent deacons around the world, with 18,000 in the United States.

"It was never the intention of the church to use deacons as replacements for priests," said DuBois.

He said there is a need for diaconate ministry on its own, and that lay Catholics in the U.S. need what deacons can offer. He said that suspending ordinations would be unfair to those studying for the diaconate, which can be a five- or six-year process.

Deacon Henry Verschuren of the Toronto Archdiocese agreed that Donovan has a distorted view of the diaconate, although he agrees with the Irish priest that women should be ordained as deacons.

Verschuren, ordained in 1980, serves in ministry at a seniors' complex where he now lives.

"I am totally blown away by that concept of the diaconate. Even though we are involved in liturgy, our first reason to be deacon is to be of service to the people on the outside of regular society, in the hospitals, jails, and city streets," he wrote. Donovan's proposal, he said, is indicative of a new kind of clericalism, viewing the diaconate as part of layers of hierarchy.

Deacon Mark Leonard of the Diocese of Albany, New York, said that Donovan, to be consistent, should be more explicit in his criticism of an all-male clergy, including both priests and deacons.

"If he is going to say it, come out and say it, and do not use the male diaconate as a tool. We are used enough," said Leonard.

If the commission were to rule against ordaining women as deacons, the result would be no new deacons ready to be ordained, said Leonard.

Fr. Anthony Cutcher, president of the National Federation of Priests' Councils and pastor of St. Peter's Parish in Huber Heights, Ohio, said he agreed with Pope Francis that women need to be brought into fuller roles in church decision making.

But suspending ordinations to the diaconate doesn't further the goal of advancing women in the church, he said.

Cutcher has experience working with deacons. There are seven in his parish, who serve in hospital visits and funerals, among other ministries.

That action would result in fewer deacons and, he said, already "the people of God are being denied the sacraments" that deacons can preside over. Suspending diaconate ordinations "would make access to the sacraments a little harder in the interim." 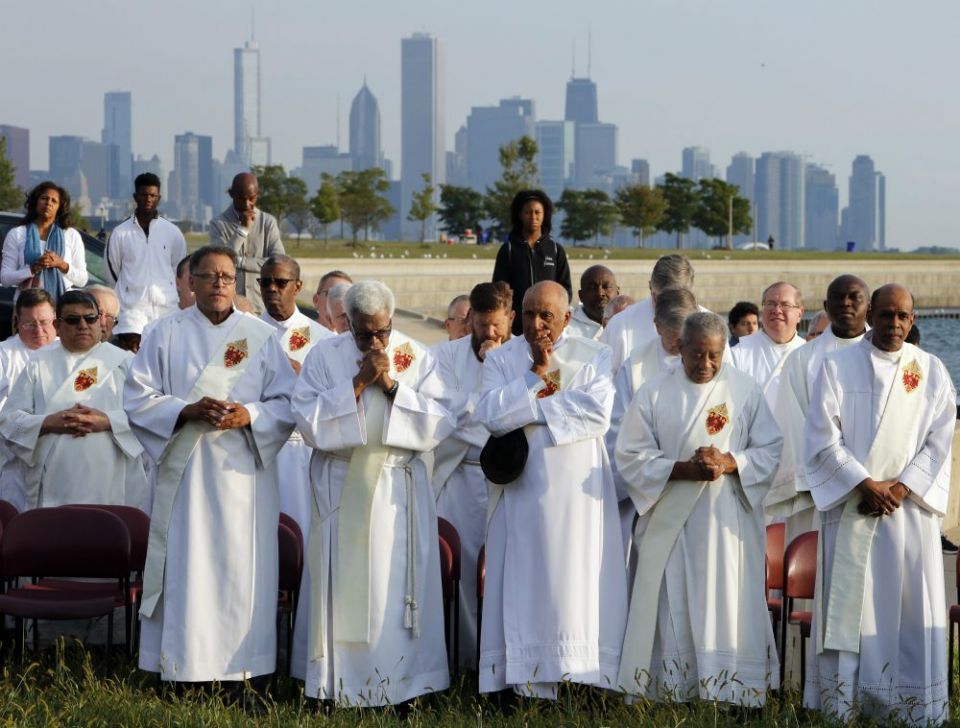 With the Chicago skyline in the background, deacons pray as participants gather to end violence and promote peace during the eighth annual Sunrise Prayer Service and Mass Aug. 26 in Chicago, an event sponsored by the Black Deacons of Chicago. (CNS/Karen Callaway, Chicago Catholic)

On such issues, he said, "the church moves slowly and deliberately." If dioceses suspended diaconate training, it would be more difficult to restart it once it has been suspended. Even if the church were to allow ordaining women as deacons, it could take 15-20 years for that change to appear in parishes.

"I understood his point," Cutcher said of Donovan's proposal. "However, I don't want to do it at the expense of the people of God."

Deborah Rose-Milavec, executive director of FutureChurch, a church reform group based in Lakewood, Ohio, that supports ordaining women as deacons, said she is supportive of Donovan's sentiments but not his proposal.

"I think we need women deacons," she said. "But I am always cautious about pitting one group against another."

Fr. Bob Bonnot, a priest of the Youngstown, Ohio, Diocese and chair of the leadership team for the Association of U.S. Catholic Priests, the U.S. counterpart to the Irish priest's association, said his organization supports ordaining women as deacons.

But, speaking for himself, he said the idea of suspending ordinations to the diaconate is a bad one.

In the United States, he said, "the diaconate is coming into its own" and has proven to be a vital pastoral resource. Suspending ordinations at this time would cut into the vital ministry work that deacons perform, said Bonnot.

[Peter Feuerherd is a correspondent for NCR's parish life reporting project, The Field Hospital. Reach him at pfeuerherd@ncronline.org.]