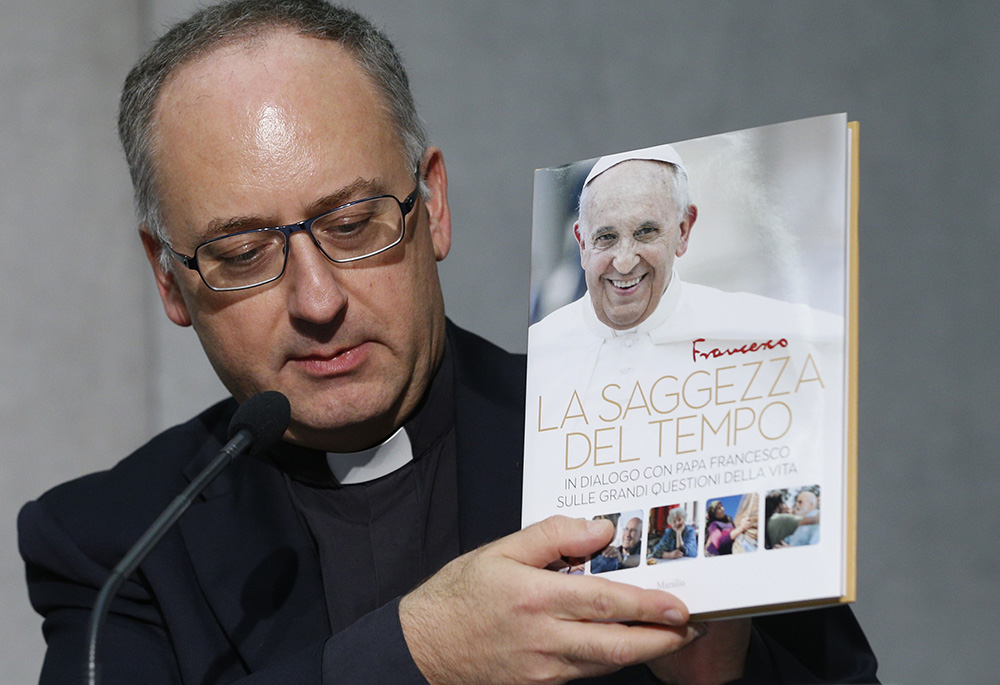 Jesuit Fr. Antonio Spadaro holds a copy of the book "Sharing the Wisdom of Time" during a briefing to discuss the Synod of Bishops on young people, the faith and vocational discernment Oct. 23, 2018, at the Vatican. Pope Francis' book offered commentary on the life stories of older people throughout the world; it has since been developed into a new Netflix series. (CNS/Paul Haring)

Some may think it strange to hear an 85-year-old celibate cleric talk about love, but for Pope Francis, the wisdom of the elderly should be shared with the young.

It's that belief — that older generations have experience that can help shape the vision and dreams of a younger generation — that led to the pope's unlikely decision to participate in a new Netflix documentary series, "Stories of a Generation with Pope Francis."

Jesuit Fr. Antonio Spadaro, a longtime close collaborator of Pope Francis, first explored this theme with Francis in a 2018 book, Sharing the Wisdom of Time, which included testimonials from Francis, legendary Hollywood filmmaker Martin Scorsese and scores of other individuals eager to share stories of love and loss, and everything in between.

In an email interview with NCR, Spadaro, who is the editorial consultant for the documentary series, discusses the pope's hands-on collaboration in the process and why Pope Francis is intent on building an "alliance" between the young and the old.

NCR: Pope Francis has spoken about respecting the elderly since his inauguration homily as pope in 2013. Why do you think he continually returns to this topic?

Spadaro: "Your elders will have dreams, your young men will have visions," so we read in the book of the prophet Joel (3:1). This is the verse that struck Pope Francis in his prayer. He has repeated it in many speeches and homilies.

Sharing the Wisdom of Time (Loyola Press) and now the Netflix docuseries "Stories of a Generation with Pope Francis" are a response to his call to deepen this biblical verse. For the pope, the models, the testimonies of elders capable of narrating dreams, allow younger generations to "have visions." The dream for Francis is, therefore, proper to the grandfather and grandmother, that is, to the people who have experience. For him, the dream does not border on the abstraction of ethereal utopianism, but is the fruit of lived life. However, it only develops in contact with those who can look ahead and have the energy to do so.

On the other hand, for Francis, young people are the generation of the "vision," that is, of the project, which needs the experience of the elderly. The young person does not see the future if not in dialogue with the wisdom of time, which only the elderly person can communicate to him. In fact, the pope says in his preface to the book: "To walk toward the future, the past is needed, deep roots are needed to help live the present and its challenges. Memory is needed, courage is needed, a healthy vision of the future is needed. Here is what I would like: a world that lives in a new alliance of young and old."

For this reason, Francis calls for the awakening of "a civic sense of gratitude, appreciation, and hospitality," which is capable of making the elderly feel a living part of their community. The sense is "civic": if it is not nourished, it is civil living that suffers and is wounded. Indeed, without a solid bridge between generations, history is interrupted, lacking models, shared values, but also the testimony of the mistakes made. In this sense, Francis defines the elderly as "memory keepers." For this reason, the realization of the docuseries was entrusted to young filmmakers under 30 who for a year traveled the world to seek out and tell the stories of men and women over 70, with experiences and "lives capable of inspiring ours," as the tagline of the series states.

The Netflix series is divided into four themes: love, dreams, struggles and work. What, in your view, is the most personal of these topics for the pope in this documentary series?

All themes are important because they are like pieces of the puzzle that is human life. Great themes emerge from the testimonies: the value of work, which makes us "talk" with the world, with people, with the earth and with all that is outside ourselves; the importance of accepting failure and learning from it; the fact that life is not a movie script, in which all the scenes are already written, but an adventure in which we must throw ourselves; the difference between surviving and making history; prayer as a "struggle"; the secrets of a successful marriage; the confrontation with the experience of death and mourning ... that's life!

How did the original idea for the book Sharing the Wisdom of Time come about and how did it develop into this documentary series?

The idea came about in dialogue with Loyola Press. We had already produced a volume in which children dialogue with the pope with drawings and questions. The pope responded and the result was a beautiful book: Dear Pope Francis. We wondered what the second step could be. And we immediately thought of the elderly. We imagined young people dialoguing with seniors and asking them about their life experiences.

I know Martin Scorsese and once, while having lunch with him, I asked him if he would like to share his experience. He immediately said yes with generosity, telling about himself, lights and shadows, as one among others. The pope read their experiences and dialogued with them. 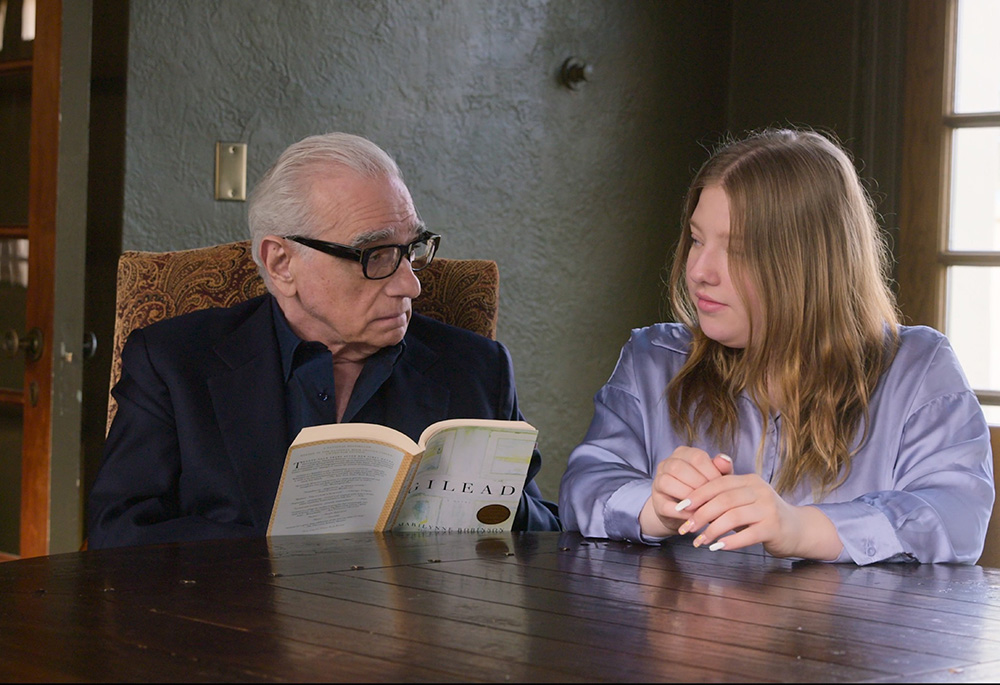 Film director Martin Scorsese speaks with his daughter, Francesca, in "Stories of a Generation with Pope Francis," a Netflix documentary series based on Pope Francis' book, "Sharing the Wisdom of Time." (CNS/Courtesy of Netflix)

Presenting the book in Rome, the desire came to me that this dialogue would become a series for the screens. It seemed like a natural development: to give those stories the three-dimensionality of storytelling. I told Simona Ercolani of Stand by Me about it. She immediately understood the validity of the proposal and accepted the idea. Hence the contact with Netflix, which confirmed the goodness of the idea, also as a moral necessity for our times. I was struck by this motivation. Obviously, I first spoke about it with the Holy Father, who accepted after some time of reflection.

Francis, however, was very clear: it was not to be a series centered on him. His words would be one witness among others and, if anything, he would accompany the testimonies with some brief reflections. The fact that the pope did not monologue was to be clear. In fact, it was a real dialogue. I asked him many questions and he answered not to a target, but to a face, to eyes that looked at him. He knew some of the questions and had thought about them before, but then he told me that in the real conversation he let go of the thoughts he had previously done and had answered spontaneously as he felt in the moment.

The book was written before the pandemic, but the interviews with Francis take place in the midst of it. How do you think the pandemic has changed or deepened his reflections on the importance of intergenerational relationships and the need to listen to the elderly?

The pandemic made making the docuseries Stories of a Generation with Pope Francis a tremendous challenge. I could see that Simona took the challenge seriously and decisively. In the end, the effort made the series even more impactful, it seems to me. Everything, every recording, every scene was the result of a specific will. I think the pandemic made everything more intense, because of the challenge of confronting limitations. We made it through, despite everything. And it gave the series an even stronger sense of urgency, of necessity, than expected. 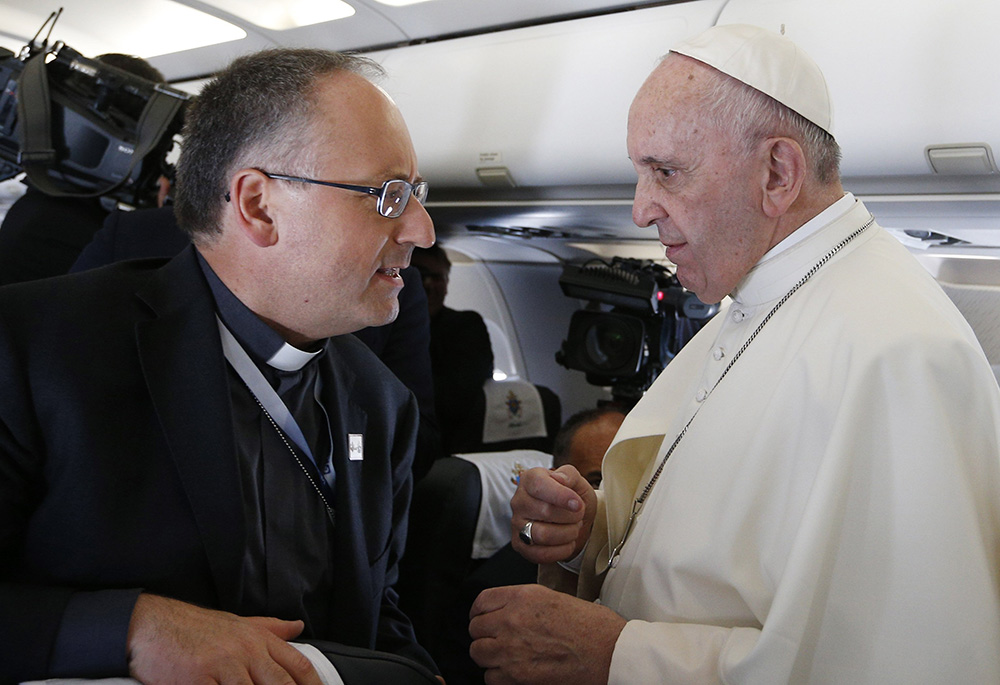 Pope Francis is pictured in a file photo talking with Fr. Antonio Spadaro, editor of La Civilta Cattolica, aboard his flight from Rome to Krakow, Poland. (CNS/Paul Haring)

You've collaborated with the Holy Father on a number of initiatives. What did you learn about him and his thinking from this project that you didn't know before?

I am still reflecting on this experience. I noticed in the pope the need to think long and hard about this project. Other times his adherence was more immediate. Here it was as if he really had to decide. And when he did decide, he was determined to give directions on how to proceed.

Once decided, the pope offered himself generously and without any time limit. So I learned the importance of necessary discernment even about obviously good things. It is not enough to know that something is good in order to do it, one must understand how and why to do it. And then I realized something else: if you want to talk about yourself in order to help others, you have to be really free to talk about your failures. The goal is not to be front and center with your own business, but to speak to help your listener.