At prayer breakfast, bishop involved in Biden text focuses on truth over unity 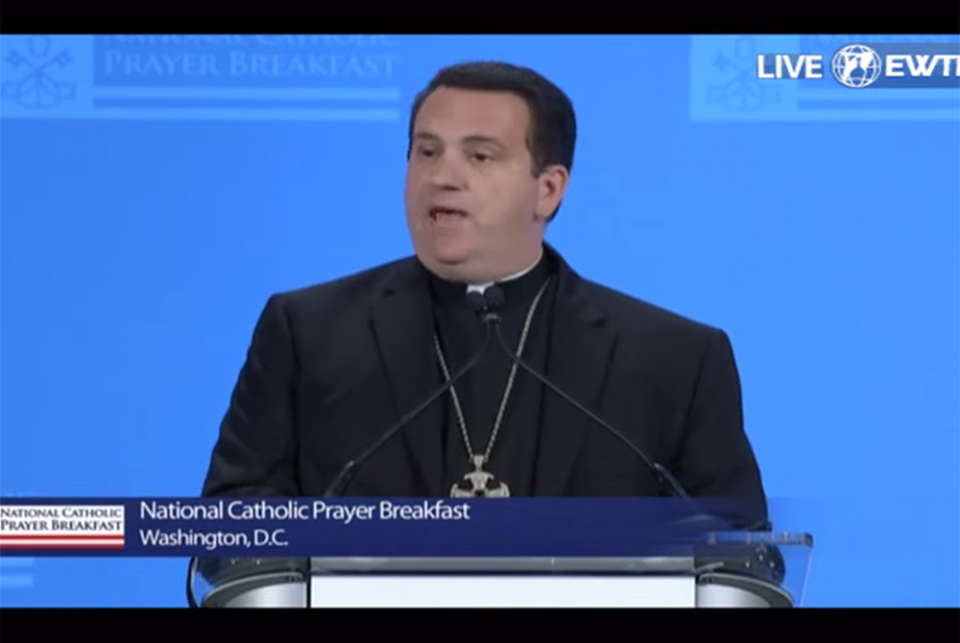 Bishop Steven Lopes of the Personal Ordinariate of the Chair of St. Peter delivers his keynote speech Sept. 14 at the 2021 National Catholic Prayer Breakfast. (NCR screenshot)

A member of the U.S. bishops' committee charged with writing a controversial document on "eucharistic consistency" told the National Catholic Prayer Breakfast on Sept. 14 that "unity requires truth," or else it will fail.

"Regardless of what the pundits say, the truth of the intrinsic and the inviolable dignity of the human person is not divisive. It is the foundation of all other rights," said Bishop Steven Lopes of the Personal Ordinariate of the Chair of St. Peter, the North American diocese for Catholics raised in the Anglican tradition.

Lopes is one of eight bishops who sit on the U.S. bishops' doctrine committee, which the prelates authorized at their June 16-18 meeting to draft the document on the Eucharist. The authorization came after a contentious debate in which some bishops openly pushed for norms to ban pro-choice Catholic politicians like President Joe Biden from receiving the Eucharist.

In his keynote address at the prayer breakfast, an annual Washington, D.C., tradition, Lopes did not directly address that controversy. However, his remarks included what could be seen as oblique references to some bishops' concerns that their conference is being divided by the push to deny communion to Democrats like Biden.

Lopes said that "unity without truth is simply uniformity bound to fail." He said defending truth and the sanctity of human life is uncomfortable and "puts us on the edge" of political discourse.

"Our fundamental reverence for the sanctity of human life does not begin at birth, but nor does it end at the border. That's what it means to be Catholic," said Lopes, who quoted Pope Pius XI's warnings in the early 20th century against internal strife and political factions that lusted for power instead of looking to serve the common good.

"You see the pope was calling out wokeism before we even had the word," Lopes said.

The bishop's use of a derogatory term for a progressive view was consistent with the overall tone of the prayer breakfast, which is advertised as a nonpartisan gathering but echoes themes popular in right-wing media and often features organizers and speakers with conservative Republican credentials.

Joseph Cella, who cofounded the breakfast and the organization that became the conservative political nonprofit Catholic Vote, announced Hong Kong businessman and activist Jimmy Lai as the 2021 recipient of the event's Christifideles Laici Award.

Lai, an ardent critic of China's communist government who started a leading pro-democracy newspaper and a magazine in Hong Kong, has been imprisoned since last December. He is facing charges of violating the territory's new national security law, imposed by the Beijing government despite wide criticisms by civil society leaders and foreign powers.

Cella described Lai, who fled the Cultural Revolution in mainland China as a boy and converted to Catholicism 24 years ago, as a man who has dedicated his life to helping ordinary people after the Chinese government's 1989 crackdown on pro-democracy activists in Tiananmen Square.

"Since then he has kept the winds of freedom coursing through a free press in China, informing the world about the religious and political persecution that occurs every day in China," Cella said.

Among their grievances, Pope Francis' critics often attack the Vatican's 2018 secret diplomatic deal with China on the appointment of Catholic bishops as a betrayal of the country's underground church. They accuse the Holy See of selling out China's beleaguered Catholic minority to a totalitarian government that has no interest in respecting their human rights.

The Vatican has frequently rebutted those claims, highlighting that the accord has reconciled the country's Catholics with Rome after decades of separation and deals only with bishop appointments and not political issues. 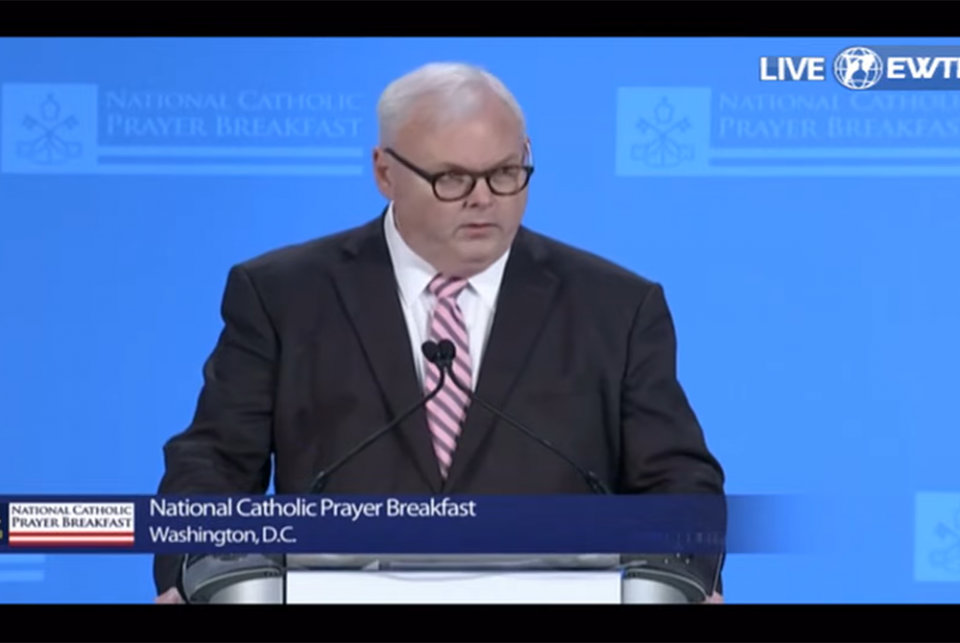 William McGurn, a former speechwriter for former President George W. Bush, accepted the award on Lai's behalf. McGurn said Lai, who he identified as his godson, is in prison because he "told the truth about China and Hong Kong, and though communism comes in many flavors ... the one thing that unites them all is communism can never tolerate truth, or truth-tellers."

The prayer breakfast created the Christifideles Laici Award in 2019 to help highlight recipients' good works. The award reads: "In Honor and Gratitude for Fidelity to the Church, Exemplary Selfless and Steadfast Service in the Lord's Vineyard."

In a videotaped segment, attendees at the prayer breakfast this year also saw a promotional spot for the "Belmont House," a space three blocks from the U.S. Capitol Hill in Washington that Belmont Abbey College, a Benedictine school in North Carolina, operates for discussions and events related to faith and public life.

"Belmont Abbey is in Washington to stand up for the rights of believers, serve the needs of the faithful who serve in Washington, and remind believers it is right and necessary to bring the insights of faith into public life," Benedictine Abbot Placid Solari, chancellor of Belmont Abbey College, said in the video.*

Belmont Abbey College was one of the first faith-based nonprofits a decade ago to sue the Obama administration over the Affordable Care Act's requirement that employers provide coverage of contraceptives in health insurance plans.

In the video, Solari said Belmont House would work to "restore the witness of faith to its rightful place in the public square." He added: "At a time in our country's history when religion and faith are being pushed out of public life, we desire to provide a refuge of hospitality and stability for those who are standing up for our religious freedom and who are proclaiming the good news of the Gospel."

Jesus is not only present in bread and wine, but in God's word