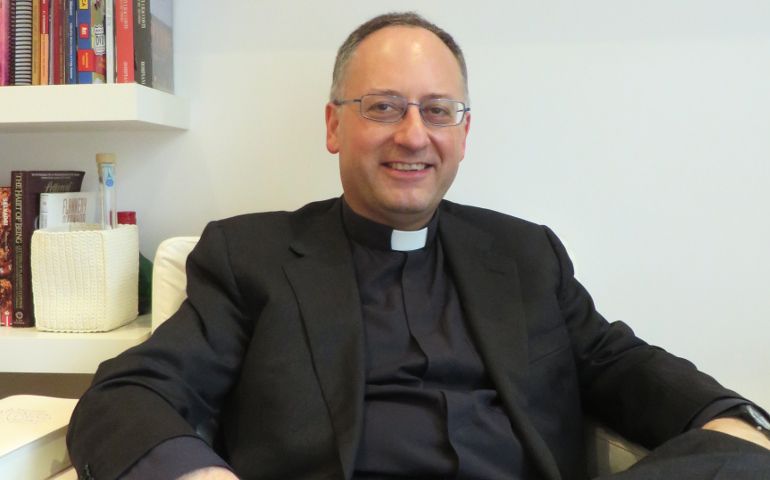 Fr. Antonio Spadaro, an Italian Jesuit who has interviewed Pope Francis, in his office at the Jesuit journal, Civilta Cattolica, in Rome. (RNS / David Gibson)

Rome — Jesuit Fr. Antonio Spadaro doesn’t have any of the titles or authority or cachet normally associated with influential churchmen in the Vatican.

But this Italian Jesuit has interviewed Pope Francis several times and is known as one of the pontiff’s trusted advisers.

Spadaro's main job is as editor of La Civilta Cattolica, an authoritative periodical that is reviewed by the Vatican before publication. Yet it is his identification with Francis and the pope’s efforts to reform the Catholic church that has made Spadaro, 50, a lightning rod for the pontiff's many critics, especially conservatives.

Spadaro sat down for an interview with RNS in late November at his office at the Villa Malta, the headquarters of Civilta Cattolica. In a wide-ranging conversation he spoke about the opposition to Francis, what’s next for the pope and the church in 2017, how the 80-year-old Francis deals with his workload, and why Spadaro is tired of seeing the popular pontiff described as a “nice” pope.

Pope Francis has started so many different projects and reforms on a range of issues, many of them controversial. What is next for the pope and the Catholic Church in 2017?

The way that Francis makes decisions is not to make plans and proposals, with big things to do here and little things there. No, it’s just real discernment. He understands what to do by walking along the way. So it’s unpredictable, even for himself. He told me, in our first interview in 2013 and at other times, that it’s always a surprise. There’s no way to foresee what he’s going to do.

But I would say that what I have felt (from him) is a little sense of, not rushing at all, but an urgency to take advantage of the time. To seize the moment.

And in fact he turns 80 years old in December?

And I see that because he is always calm and quiet. This is amazing to me — it’s kind of a miracle!

In a recent interview he said he “sleeps like a log” for six hours a night. He also said he prays a lot, and his stamina is “a grace of the Lord.” What's his secret?

All of this is born out of prayer … ?

It starts in his chapel. He doesn’t have an office. He has a room in Santa Marta. His office is his chapel.

OK, but any guesses of what might be coming next?

That doesn’t really interest me …

The next Vatican synod, set for October of 2018 on the theme of young people, certainly seems like a major focus, no?

The big topic, or theme, that I am seeing coming up many times in recent months is "discernment." That is at the core of Amoris Laetitia, especially discernment for priests and seminarians. (Editor's note: Amoris Laetitia is the lengthy "exhortation" that Francis published last spring summing up his take on the deliberations of two major church meetings, or synods, on the church's approach to the modern family. The document has sparked much controversy for seeming to allow pastors to bend the rules with communicants.)

The problem is that the church must learn to apply the practice of discernment better and more deeply and not just apply rules in the same way for everyone. The church must be attentive to people’s lives, to their journey of faith and to the way in which God works in each person. So a pastor can’t be a pastor by applying general rules to individual people. The church has to grow in discernment. That would be also one of the most important topics of the next synod.

Meanwhile, the critics of this discernment – like the famous four cardinals – say they need "yes-or-no" answers?

I don’t know if they are critics of the discernment. I just know that the pope has said that life is not black and white. It is gray. There are a lot of nuances, and we have to discern nuances.

This is the meaning of the Incarnation — the Lord took flesh, which means we are involved with real humanity, which is never fixed or too clear. So the pastor has to get into the real dynamic of human life. This is the message of mercy. Discernment and mercy are the two big pillars of this pontificate.

Is there a sense the opposition to Francis’ approach is growing and more intense?

But there is another kind of opposition, which is just imposing one’s own view, which is ideological opposition.

The pope listens to the first and is open to learning. But he doesn’t pay too much attention at all to the second kind.

Is the “good” opposition growing? And what would that mean for the pope’s approach?

The good opposition is discreet. There are people who talk to the pope and are very straightforward. And he likes these kind of people since they don’t make noises that are theatrical expressions.

In 2013 he told me, at the start of our first interview, if you think that something I am saying is wrong please tell me. I was very struck by that. It was a little thing but it showed me how open he is to being criticized.

But you have to take account of the fact that there are some gestures or documents, like Amoris Laetitia, which is the fruit of a long process. It is not just the pope saying this, it is two synods, and the synods were very open and straightforward. And he liked that a lot.

And at the end he wrote his exhortation because he knows his job as pope — because he is not just a "nice" pope.

What do you mean by that? So many people think he is in fact very nice and that’s why they love him.

I am tired of seeing this, that the pope is "nice and kind." Yes, he is nice and he is kind, of course. But he knows what being a pope means. He is absolutely aware of his job. He knows what to do and he knows what kind of power he has — which is a power of service.

He is the pope, and he knows he is pope. He is fully conscious of his ministry as the successor of St. Peter. So he exercises the authority of the keys of Peter when it is necessary. But he listens a lot, he gets information, he is open. He prays a lot before doing something. But when he takes a decision, this decision comes from a long process. This is very important. Listening, praying and discerning.

So when he acts as pope it is not a personal whim?

He is very tough. He takes decisions. But it is the result of a process. He is not nice; he is tough. He is merciful. He is quiet and calm. … I don’t like the image of just a "nice" pope. Jesus gave a witness of the love of God. He wasn’t just nice. The pope’s way of acting and of saying things comes from the Gospel. It is shaped by the Gospel. It is not shaped by the desire to be nice.

Looking forward, people are also talking about what happens “after Francis.” He is 80 years old. What is the future of the papacy? We have seen reaction after Obama, with the U.S. electing Donald Trump. Is there going to be a similar dynamic with Francis?

I just think that the process that Francis has started is not reversible. But this does not mean that his successor has to be like him. He could be completely different. We will see, but we don’t know.

Francis also seems to respect tradition in ways that are often overlooked. He hasn’t gone over the limit of 120 cardinals, for example, the way John Paul II often did.

He’s not liberal, absolutely. He’s not conservative but he’s not liberal. He’s something different. And he also doesn’t like to be surrounded by "Bergoglians" — by people like him. So it’s a completely different way of understanding.

How is the reform of the Roman Curia (the papal civil service) going? There have been many organizational changes.

Structures can change, but Francis has said you have to change the soul before changing the structures. And the soul is changing. … The vision of the departments is very inclusive, not dividing each office up into a different part of church life or teaching.

For me, the biggest challenge is not to cut the people of God into rules and parts, so the priests are here and the laypeople are over here. There is a different vision, a more pastoral vision, more global, more rooted in the Second Vatican Council (Editor's note: the reforming council of the 1960s).

The reforms are ongoing but the spirit is the right one and the spirit is going to reshape things, slowly. It takes time, but we are not in a hurry. It’s the fruit of a consultation. It is going forward. Things are going on. They are developing quite well.

What is most important for me is: What is the intention of the pope? Once I asked him: But do you want to reform of the church? His answer was: "No." I remember this very well. We were in his room at Santa Marta. He said: "I just want to push Christ to the center of the church. I mean, more and more. So if Christ is at the center of the church, he will do the reform. It’s not up to me. It’s up to him."

If you put Christ at the center you will be able to change everything. This is very important for me because it made me realize that he is not interested in doing lots of changes, he is not worried about changes. He is worried about the inner wheel of the church. For him it has to be Christ.

For example, mercy — mercy means putting the core of the Gospel inside the heart of the church. Not rules, not problems, not norms. The center of the church is the mercy of God. So if the mercy of God is at the center you can understand everything in a different perspective. And you can do all the reforms that you like.

That also helps you to understand his own role in the church. He doesn’t feel himself to be the center of the church, as if everything was up to him. That’s why he doesn’t feel the pressure, the stress. It’s not up to him. It’s up to God. He is a channel and he works for that. After concluding his working day he eats well and sleeps well. This is his perception of his role in the church.

His health is good?

Very good, yes. In the evening he is tired. But he recovers very easily. Sometimes during the trips, for example, I can see him very tired at the end of the morning. Then he goes to sleep for two or three hours, and then, pow!

People | A Q-and-A with Fr. Antonio Spadaro, a Jesuit who has the pope’s ear

Me to 20-year-old me: Pope Francis' voice matters