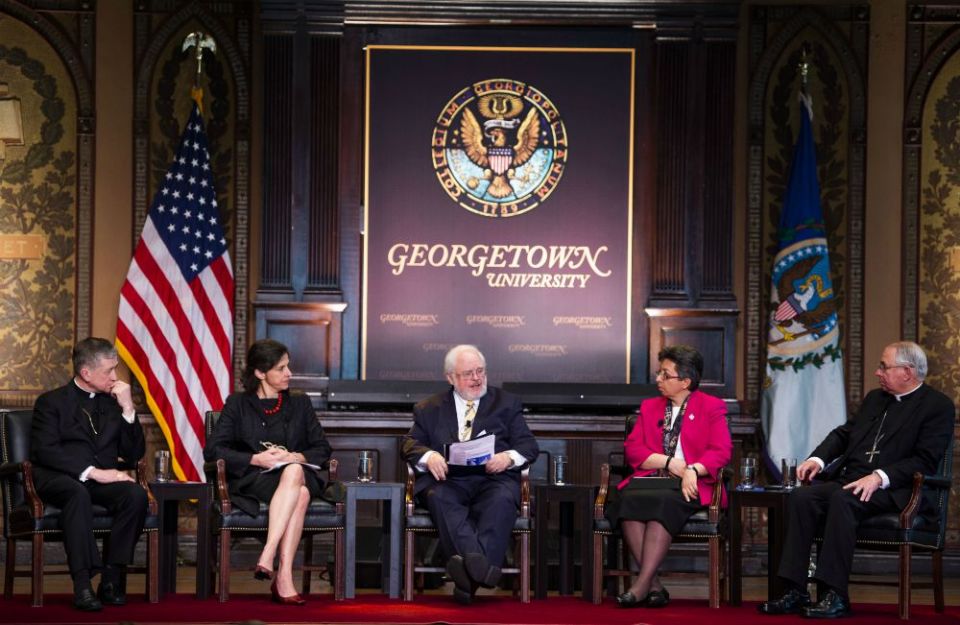 Washington — What role can Catholic social teaching play in bringing together a divided nation? That was the question for a June 3 panel at Georgetown University that discussed "Overcoming Polarization in a Divided Nation through Catholic Social Thought: Bringing the Joy of the Gospel to a Divided Nation."

If the four panelists did not arrive at an answer for curing society's current woes of tribalization and incivility, it was not for lack of trying. Part of an ongoing series of dialogues on religion and society, sponsored by Georgetown's Initiative on Catholic Social Thought and Public Life, the conversation touched on diversity, immigration, and the impact of Catholic sisters (religious and biological) on the lives of the speakers.

If John Carr, who directs the initiative and has moderated all of its discussions, was looking for a panel to illustrate DeGioia's point, he could not have done much better. The speakers included Sr. Teresa Maya, Sister of Charity of the Incarnate Word of San Antonio and president of the Leadership Conference of Women Religious; Helen Alvaré, professor at the Antonin Scalia Law School at George Mason University; Archbishop José Gómez of Los Angeles, who is also vice president of the U.S. Conference of Catholic Bishops; and Cardinal Blaise Cupich, archbishop of Chicago and a member of the Vatican Congregation for Bishops.

The conversation began with a question about the roots of our current state of cultural discontent and division.

"We have contributed to this polarization by our likes and dislikes and what I would call our tribal instinct," said Maya, who took a first crack at an answer. "It's about fear. The fear of the other has been poisoning our souls. We have allowed it to divide us."

She referred to Pope Francis and his exhortation to be peacemakers, and to embody hope, the antidote to fear. Quoting him, she said, "Hope is the door that opens into the future."

Cupich later picked up on the theme of fear, criticizing elements of American culture that "make money off of selling fear, making people afraid," of immigrants, of Muslims, of people who think differently than they do, he said. "People are being told to be afraid."

Fear dehumanizes, he said, making the unborn, minorities, migrants, and all those who are vulnerable count "as nothing." Dialogue and true "encounter" are necessary to break down the barriers of fear that separate people, Cupich said.

It needn't be "Hegelian dialogue," he joked, just an effort to "convene people who are different to come together and break down the fear."

Cupich offered as an example his invitation to Jesuit Fr. James Martin to speak in Chicago after Martin was disinvited from several scheduled talks, including at the Theological College at the Catholic University of America, because of right wing backlash over Martin's book on LGBT Catholics.

Martin was in the audience, which erupted in applause for Cupich.

Gómez, who was born in Mexico and presides over the largest archdiocese in the country (a point of repeated joking between him and Cupich, who presides over the third largest), has made obvious in his public remarks and actions his affinity for immigrants.

"It's easy to talk about the legal principles that we have in our country," and to lose sight of the fact that we're talking about families, women, men, and children, he said.

Here, the church can provide a stellar example, Gómez said, which is why it must be involved in the immigration debate, and why there is no contradiction between being faithful and being politically active.

"I see the church as the family of God," he said.

Gómez noted that Catholic advocates of immigration reform are often caricatured. "The perception is that we are for open borders and everyone coming to the United States," he said. "No, we are for legal immigration that makes sense."

Alvaré told the audience that if they're feeling dizzy because public and political life seem out of whack, "dizzy is correct. Catholic social teaching says things are not right."

As a law professor, she said that she often reminds her students that their most extreme and rancorous remarks today will come back to haunt them later, and to remember that they're dealing with people and not just ideas and ideologies.

"Tone, tone, tone," Alvaré said. "The tone has to be that of people who are in [what economists call] a repeat player game, not a one-time game. You should think to yourself, 'How is it going to be if I have to play with this person again? Don't you want to speak in a way to make future conversation possible?' "

Carr noted that many of his students today think that, "dialogue is about bringing people together to convince them that I'm right," and that everyone has equal claims to truth, reducing principles to "this is how I feel."

"I think that dialogue is something you have to learn," Maya added.

Although the topics were heavy, the conversation was light at times, with Carr asking at the start how many present had had their lives touched in some way by a religious sister (let it be shown that most onstage and in the crowd raised their hands). This led to joking between Gómez (with four biological sisters) and Cupich (who one-upped him with five) about the difficulties of ever getting a word in.

All agreed that the church has a responsibility to engage in dialogue.

"I think we need to keep at it. We do have a voice with people. It is a platform," said Cupich, who has at times been criticized in the news media in Chicago for his support of Francis. "But it's at a cost, because you're going to get criticized. You can't be thin skinned."

Likening the modern church to missionaries, Gómez said, "We need to be there to evangelize."

Fred Rotondaro had a knack for friendship across DC divides

Lack of just wages, benefits a threat to human dignity