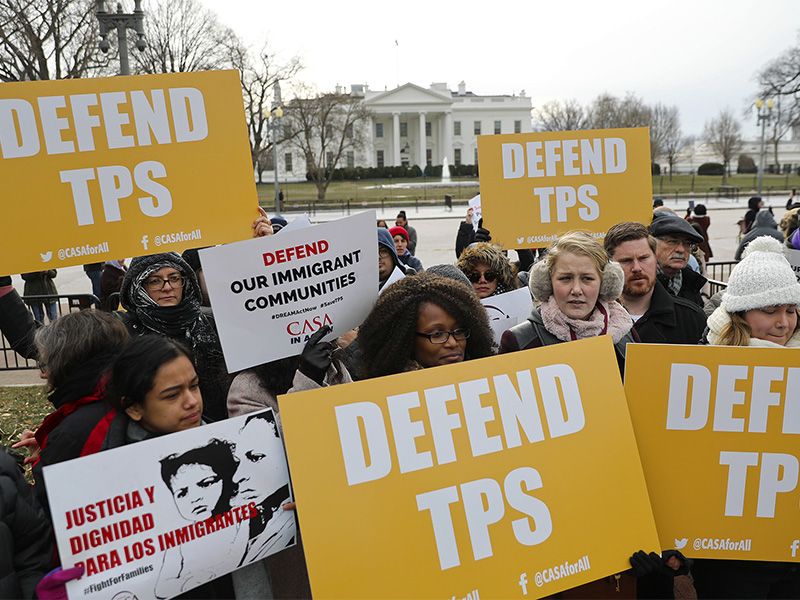 CASA de Maryland, an immigration advocacy and assistance organization, holds a rally in Lafayette Park, across from the White House in Washington, Jan. 8, in reaction to the announcement regarding Temporary Protective Status for people from El Salvador. (AP/Pablo Martinez Monsivais)

Washington — When German Fernandez learned last week that the Trump administration plans to end Temporary Protected Status for him and around 200,000 other immigrants from El Salvador, it was a nightmare come true.

"When I saw the news, I could express no words," he said. "TPS has protected me for 18 years."

When the program allowing undocumented Salvadoran immigrants to live and work in the United States ends next year, many will be at risk of deportation to a country that is racked by horrific gang violence.

But rather than succumb to despair, many Salvadorans — who are overwhelmingly Christian — are finding hope, support and empowerment in churches that are working with advocacy groups and faith-based coalitions to offer assistance.

Fernandez, who has been sending money he makes in the U.S. back to his family in El Salvador, has found support at St. Matthew's Parish, an Episcopal church in the Washington suburb of Hyattsville, Md., where about 40 percent of the congregation's roughly 800 members are Salvadoran TPS holders.

"My faith is important to me, because I am feeling alone," said Fernandez, who said the support he and his fellow parishioners are getting from the church "is very important."

He said he's talked to many friends about the TPS announcement, "and they cried because they knew the reality of what's going on now." He and other church members are planning to fly across the country in a few days for a major protest in Sacramento, Calif.

Greater Washington contains one of the largest concentrations of Salvadorans in the country, according to the Pew Research Center. And there is a lot of outrage at St. Matthew's.

"On Sunday I will preach to the community that this is a sad reality — it's a disgrace on the part of the U.S. government. It's absurd, dehumanizing, unconscionable, un-Christian," the Rev. Vidal Rivas, who is also Salvadoran, told RNS last week.

Rivas spoke in Spanish while standing next to a statue of Oscar Romero — the revered Salvadoran martyr now in line for sainthood in the Catholic Church — that adorns the front of his sanctuary.

Trump, Rivas added, "has to understand that laws are not made to abuse the poor, rather to favor the poor. But in fact he is favoring the wealthy, which is an insult to God's people."

Ana Langerak, the church's associate priest, said the congregation has been preparing for the potential end of TPS status for months, with some worshippers tearfully asking for prayers during Sunday services. She said the church worked with local advocacy groups to host seminars with immigration and family lawyers, where parishioners asked hard questions such as what to do if parents are suddenly torn away from their children by the federal government.

Immigration activism has also become a regular part of St. Matthew's, such as when leaders brought congregants to participate in a protest vigil in Washington last October. But church leaders are helping Fernandez and others speak directly to power: In December, St. Matthew's partnered with a local Mennonite church to hold meetings with the staff of Maryland's two Democratic senators, Chris Van Hollen and Benjamin Cardin. The pair co-authored legislation in November that would allow many TPS holders to apply for legal permanent residency, and Langerak said Senate staffers asked the group how it could reach Republican Episcopalians or Mennonites to drum up support for the bill.

"We try to channel (our anxiety), right?" Langerak said. "We have voices, and we are a community of faith. We have spiritual strength."

Other churches are also struggling to care for those impacted by the decision. Maria Swearingen, co-pastor of Calvary Baptist Church in downtown Washington, said her community is still reeling.

"Our stewardship chair person is a TPS holder from El Salvador. The very functioning of our church is impacted by this decision," Swearingen said in an email. "Our beloved community is gathering to offer support and pray and make plans in light of the new information this week. We're doubling down on our support and advocacy and pastoral care."

Swearingen said her congregation is also a member of a "sanctuary" network. Network members, usually worship communities of all faiths, collaborate to provide legal and advocacy assistance for immigrants. Some even pledge to offer physical "sanctuary" for those at risk of deportation, a rare step that relies on the federal government's internal policy of avoiding raids at "sensitive locations" such as churches.

These kinds of networks exist all over the country and predate Trump's election, but advocates say their numbers have swelled since he took office, and Swearingen speaks of a spiritual urgency in responding to the administration's immigration policies.

"Scripture is filled with stories of leaders and rulers whose greed, narcissism, and thirst for violence and chaos left them plummeting from flimsy thrones housed inside castles built on sand," she said. "Donald Trump is not immune to God's acts of justice and mercy in the world."

Salvadorans were granted TPS status in response to a pair of earthquakes that hit El Salvador in 2001, and their permits have been renewed on an 18-month basis ever since. Secretary of Homeland Security Kirstjen M. Nielsen said in a statement last week that "the original conditions caused by the 2001 earthquakes no longer exist. Thus, under the applicable statute, the current T.P.S. designation must be terminated."

Noel Andersen, national grass-roots coordinator for Church World Service, said major faith groups set up a meeting with Nielsen three days before the TPS announcement regarding Salvadorans (the administration had already ended TPS status for some 59,000 Haitians weeks earlier). Representatives from CWS, Sisters of Mercy, the U.S. Conference of Catholic Bishops, American University and others made the case for keeping TPS in place, arguing that sending TPS holders back to El Salvador is dangerous for several reasons — especially given the country has one of the highest homicide rates in the world.

Andersen said DHS officials did not appear to be swayed, countering by saying that El Salvador has the capacity to handle the influx of migrants. Still, he believes the fight isn't over and progress is still possible.

"I do think it was a new door opening with the faith community," he said.

Other faith groups are speaking out as well. The chair of the USCCB Committee on Migration issued a statement calling the decision "heartbreaking"; the American Friends Service Committee, a Quaker group, described it as "just another move to target immigrants and disregard human rights"; the Council on American-Islamic Relations declared it "heartless"; and the Religious Action Center of Reform Judaism decried it as "the latest in a shameful and dangerous pattern of America turning its back on those in need."

Meanwhile, Fernandez and his religious allies plan to keep fighting. For him, the chance to stay doesn't just mean avoiding violence and poverty in a faraway land. It's also about the chance to earn a living without being deported or forced to live in the shadows.

Immigrant stories from the past echo those of today's newly arrived

Study says doing away with immigration program would harm economy