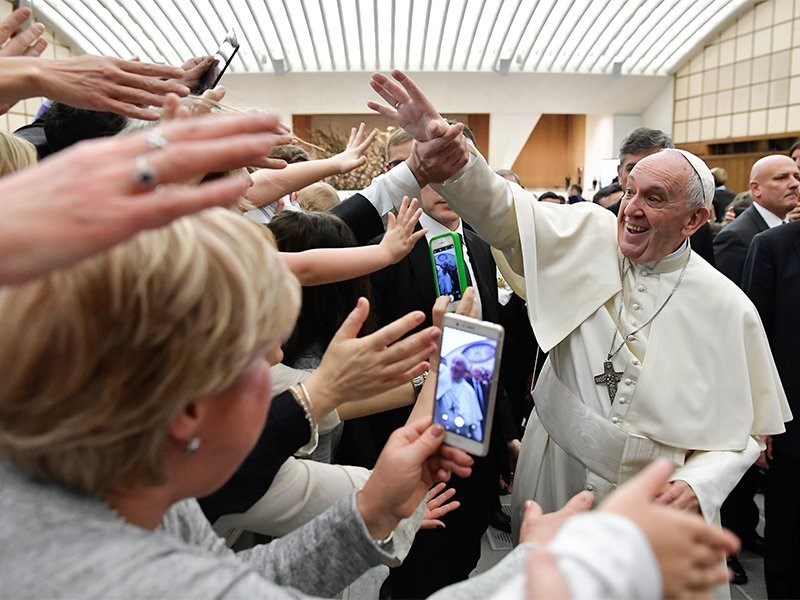 Pope Francis is cheered by faithful during an audience with health workers, in the Paul VI Hall at the Vatican, on March 3, 2018. (L'Osservatore Romano/ANSA via AP)

After a weeklong meeting in Rome with Pope Francis, young Catholics called for an authentic and empowering church where they would feel welcomed.

The call came in a 16-page document approved by the 300 young people from all over the world who participated in a meeting preparing for the Synod of Bishops planned for October on the topic of "Young People, the Faith and Vocational Discernment."

In preparation for this pre-synodal meeting, 15,000 young people engaged online through Facebook groups. Not surprising, the official English text appeared on Facebook before appearing on the official synod website.

What do the young people want from the church?

"The Church oftentimes appears as too severe and is often associated with excessive moralism," they noted. "We need a Church that is welcoming and merciful, which appreciates its roots and patrimony and which loves everyone, even those who are not following the perceived standards."

They asked the hierarchy to "be a transparent, welcoming, honest, inviting, communicative, accessible, joyful and interactive community."

The pre-synod participants noted that many of their peers are leaving the church in large numbers. "Young people who are disconnected from or who leave the Church do so after experiencing indifference, judgment and rejection," said the document.

"One could attend, participate in, and leave Mass without experiencing a sense of community or family as the Body of Christ. Christians profess a living God, but some attend Masses or belong to communities which seem dead," the delegates complained. "Young people are attracted to the joy which should be a hallmark of our faith." They want "to see a Church that is a living testimony to what it teaches and witnesses to authenticity on the path to holiness, which includes acknowledging mistakes and asking for forgiveness."

The delegates also said that they want "attractive, coherent and authentic models. We need rational and critical explanations to complex issues —simplistic answers do not suffice."

The young people said they are looking for mentors who could guide them in discerning their vocation in life. A mentor should be "a faithful Christian who engages with the Church and the world; someone who constantly seeks holiness; is a confidant without judgement; actively listens to the needs of young people and responds in kind; is deeply loving and self-aware; acknowledges their limits and knows the joys and sorrows of the spiritual journey."

At the same time, it said that mentors "should not lead young people as passive followers, but walk alongside them, allowing them to be active participants in the journey." These mentors, according to the young people, "should respect the freedom that comes with a young person's process of discernment and equip them with tools to do so well."

"The young have many questions about the faith," said the document, "but desire answers which are not watered-down, or which utilize pre-fabricated formulations. We, the young Church, ask that our leaders speak in practical terms about controversial subjects such as homosexuality and gender issues, about which young people are already freely discussing without taboo."

They also acknowledged other controversial issues in the church: "contraception, abortion, homosexuality, cohabitation, marriage, and how the priesthood is perceived in different realities in the Church."

They said "there is still disagreement and ongoing discussion among young people on these polemical issues. As a result, they may want the Church to change her teaching or at least to have access to a better explanation and to more formation on these questions."

While acknowledging that "there is internal debate, young Catholics whose convictions are in conflict with official teaching still desire to be part of the Church."

They asked the church to go where young people "are comfortable and where they naturally socialize: bars, coffee shops, parks, gyms, stadiums and any other popular cultural centers," as well as "more difficult places such as orphanages, hospitals, marginal neighborhoods, war-torn regions, prisons, rehabilitation centers and red-light districts."

All of this is to bring Jesus and the Gospel to young people. "[M]any of us strongly want to know Jesus, yet often struggle to realize that He alone is the source of true self-discovery, for it is in a relationship with Him that the human person ultimately comes to discover him or herself," they explained. "Thus, we have found that young people want authentic witnesses – men and women who vibrantly express their faith and relationship with Jesus while encouraging others to approach, meet, and fall in love with Jesus themselves."

The young people said that they want not to be passive but to be leaders in the church. "The Church must involve young people in its decision-making processes and offer them more leadership roles," said the report. "These positions need to be on a parish, diocesan, national and international level, even on a commission to the Vatican. We strongly feel that we are ready to be leaders, who can grow and be taught by the older members of the Church, by religious and lay women and men."

The delegates also saw their role as engaging the social justice issues of our time. "We seek the opportunity to work toward building a better world," they said. "We want a world of peace, one that harmonizes integral ecology with a sustainable global economy. For young people living in unstable and vulnerable regions of the world, there is a hope and expectation for concrete actions from governments and from society: the end of war and corruption, addressing climate change, social inequalities and security."

One suggestion that did not get into the report was that at the synod in October, each bishop be accompanied by a young person. While that will not happen, hopefully the bishops will listen to what these young people say about themselves, the church and the world they live in.

Writing and approving the 16-page document in a week was a remarkable achievement by these young people granted that many synods of bishops have proved incapable of doing the same in a month's time. The young people's willingness to dialogue and build consensus is itself an example to the bishops. Maybe at their synod the bishops should simply approve this document from the pre-synodal meeting of young people and then go home.