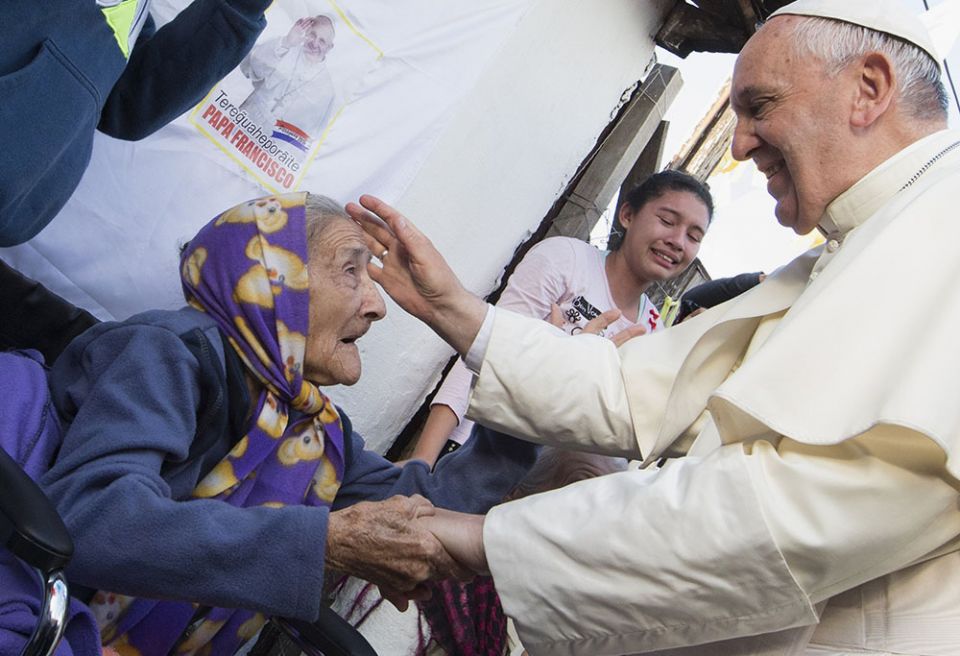 Pope Francis greets an elderly woman as he meets with people in Asunción, Paraguay, on July 12, 2015. (CNS/Paul Haring)

When Pope Francis celebrates the first-ever World Day of Grandparents and the Elderly on July 25, he will be elevating a theme that he has sought to promote since his inauguration homily as pope in 2013, when he said one of the duties of being a Christian is protecting the elderly.

Earlier this year, on Jan. 31, when he announced the establishment of the special day, Francis said, "The Holy Spirit still stirs up thoughts and words of wisdom in the elderly today."

"Their voice is precious because it sings the praises of God and safeguards the roots of peoples," he continued. "They remind us that old age is a gift and that grandparents are the link between generations, passing on the experience of life and faith to the young."

The World Day of Grandparents and the Elderly is to be celebrated every year on the fourth Sunday of July on the feast of Sts. Joachim and Anne, Jesus' grandparents.

For Francis, who has returned to the theme on scores of occasions over the last eight years of his papacy, including in a book and a forthcoming Netflix documentary, securing the link between generations is essential now more than ever in a church seeking to reemerge in a post-pandemic world.

Why are grandparents an important theme for Pope Francis?

For Francis, the importance of grandparents is personal.

Prior to becoming pope, and frequently since then, he has cited his own grandmother Rosa as critical to his priestly vocation.

"It was my grandmother who taught me to pray," he said. "She taught me a lot about faith and told me stories about the saints."

When he was a young seminarian, his nonna Rosa told him that "the most important thing for a priest is to celebrate Mass," and shared the story of another mother who advised her priest son "to celebrate Mass, every single Mass, as if it was your last."

The Bergoglio family emigrated from the northern Italian region of Piedmont to Buenos Aires, Argentina, in 1929. Following the birth of Jorge Mario Bergoglio in 1936, the future pope spent time each day in his grandparents' home.

Francis has also written about how he keeps a note from his nonna in his breviary.

"May my grandchildren, to whom I have given the best of my heart, have a long and happy life," she wrote. "But if there are days of pain or illness, or if the loss of a loved one fills them with despair, may they remember that a whisper of a prayer and a look to Mary at the feet of the cross, can be like a drop of balm on even the deepest and most painful wounds."

And in his first Palm Sunday homily as pope, Francis again elevated his grandmother's wisdom, telling the faithful: "When we were small, our grandmother used to say: a shroud has no pocket," as a reminder that one cannot take one's money with them to the grave.

What has Francis had to say about grandparents and the elderly?

Since becoming pope, Francis has reserved some of his highest praise for the elderly, referring to them as "heroic," a "treasure" and "beautiful." 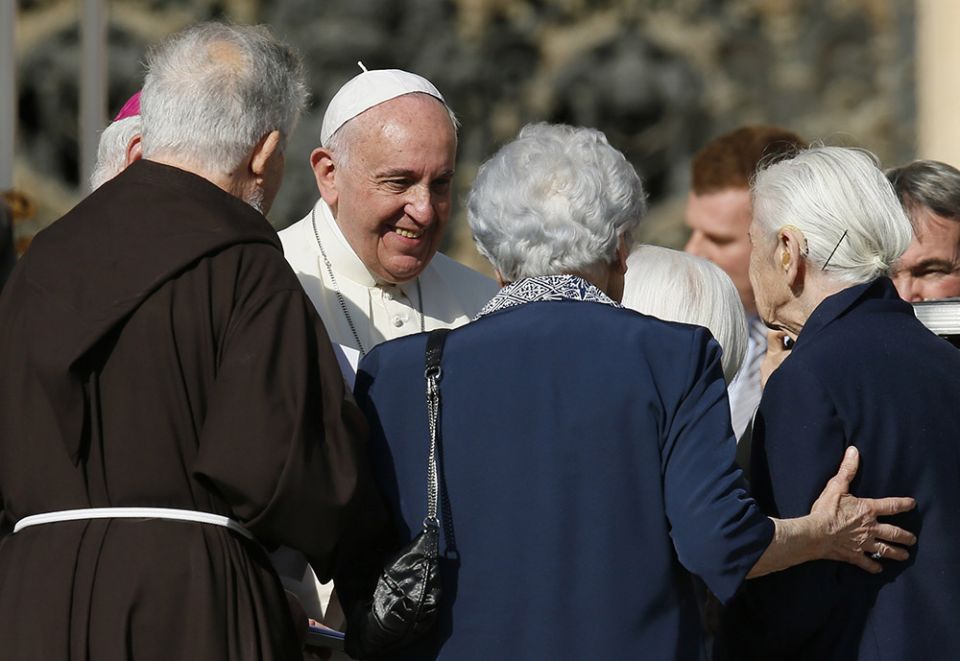 Pope Francis greets people during an encounter with the elderly in St. Peter's Square at the Vatican Sept. 28, 2014. (CNS/Paul Haring)

In fact, in 2014, Francis hosted a first-ever meeting with the elderly with an estimated 50,000 individuals in attendance, among them Pope Emeritus Benedict XVI, whom the pope greeted as the "grandfather of all grandfathers."

At an event in St. Peter's Square, which included musical performances by Andrea Bocelli, the pope told the crowd that "old age is a time of grace," adding that "the elderly, grandparents have the ability to understand the most difficult of situations: a great ability! And when they pray for these situations, their prayer is strong; it is powerful!"

In his landmark 2015 encyclical, "Laudato Si', on Care for Our Common Home," in making his case for greater urgency for environmental action and care for creation, the pope went on to lament a "throwaway culture," that abandons the elderly who "no longer serve our interests."

Following a Synod of Bishops on young people in 2018, the pope specifically cited the importance of the elderly in advising younger generations on how to think about the future. 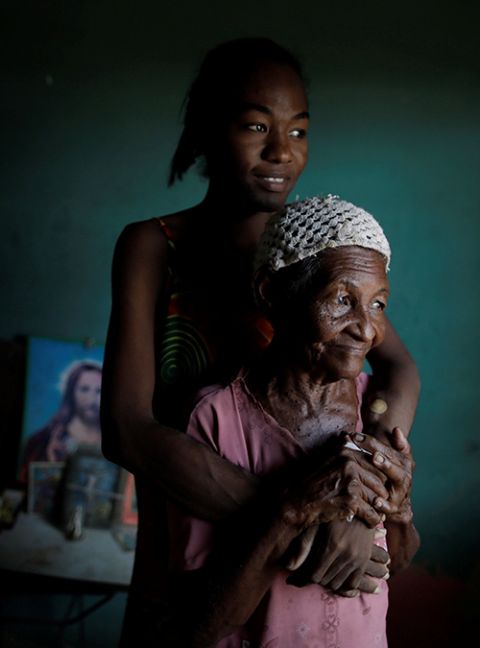 "The elderly have dreams built up of memories and images that bear the mark of their long experience," Francis wrote in his post-synodal apostolic exhortation Christus Vivit. "If young people sink roots in those dreams, they can peer into the future; they can have visions that broaden their horizons and show them new paths. But if the elderly do not dream, young people lose clear sight of the horizon."

What does the pope hope to accomplish through a day for the elderly and grandparents?

The desire to build a "culture of encounter" has become one of the major themes of the pope's agenda — something he sees as needed between nations, religions and generations.

By establishing the inaugural World Day of Grandparents and the Elderly, the pope is seeking to make the link between the elderly and the young more explicit, with both recognizing their need for the other and the value such relationships offer.

In reminding the elderly that their life still has purpose, even if they are not grandparents, the pope drew on his own personal experience: "I was called to become the bishop of Rome when I had reached, so to speak, retirement age, and thought I would not be doing anything new."

In announcing the day, the Vatican has said that those who attend a Mass or another celebration for it and "devote adequate time to actually or virtually visiting their elderly brothers and sisters in need or in difficulty" or join in prayers for the elderly July 25 may receive a plenary indulgence.

For all parties, the pope wants the day to serve as a reminder that they are still needed. After over a year of the COVID-19 pandemic, which particularly affected the elderly and resulted in the physical separation of families for long periods of time, the pope believes both the elderly and the young can build a better future as the world reemerges from this bleak period.

"You are needed in order to help build, in fraternity and social friendship, the world of tomorrow," the pope said in his special message for the upcoming day. "The world in which we, together with our children and grandchildren, will live once the storm has subsided."

People | Why is Pope Francis celebrating a day for grandparents and the elderly?

New St. Louis archbishop connects with a pope who 'connects the dots'